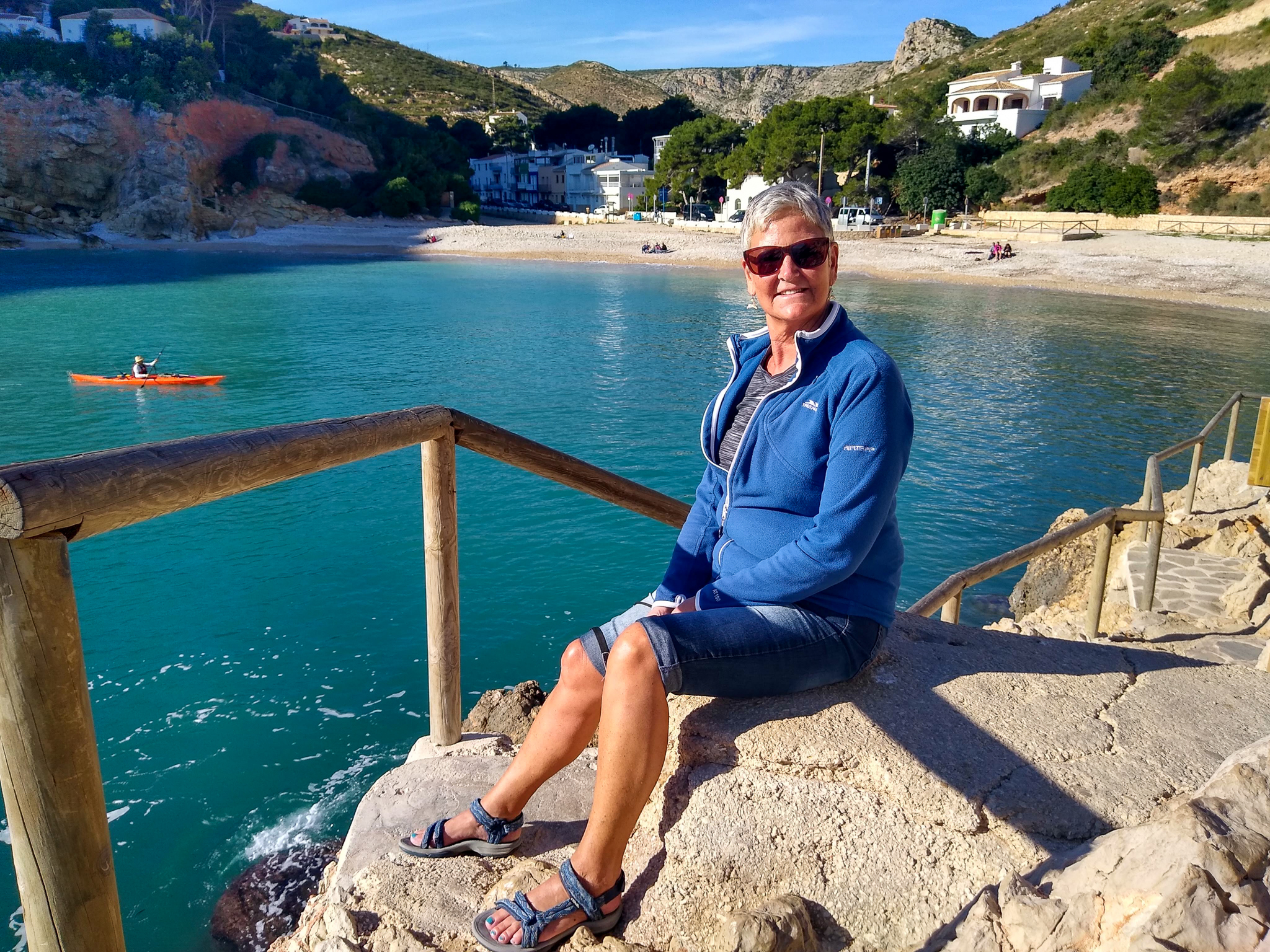 Zaragoza to Xabia (Javea) is about 5 hours non-toll (not a lot faster taking the toll road). Interestingly there were digital sign up offering lorries reduced rates for using the toll road……and a big chunk of toll road between Tarragona (south of Barcelona) and Alicante is going to have the tolls removed on the 1st January when the contract runs out!

More flat plains with mountains in the distance, but climbing higher all the time. Teruel was about 3000 feet as was a lot of the latter part of the journey heading south.

We stopped for a snack at what must have been the where the terrain started to descend towards the coast. It seemed a popular stop for cars and trucks and it also turned out to be the turn-off for the Javalambre Ski Resort….only about an hour away from Valencia!

The Spanish truck stops are great. A good choice of food and drinks, good quality and cheap. Also wine, hams and other local produce! You can see the truck drivers having a generous brandy with their coffee!

We were on the “Via Michelin” Android App “Discovery” routing. That took us through Valencia, past the impressive “City of Arts and Culture” buildings. They are worth exploring.

Xabia (or Javea) has two spellings. The “X” spelling is the Valencian language which is closely related to Catalan. Javea is the Castilian spelling.

We found the apartment easily enough despite the one-way system on wide, empty roads!, Mariela was there to meet us and show us around. The pool looked nice, the grounds were smart and the ground floor apartment was nicely presented. It even had a lift down to underground parking,

The location was great. About 140 meters to the beach, about 10 minutes into the port and about 20 minutes to L’Arenal or the Old town. Also very close to four good supermarkets including Aldi and Overseas Abroad (which has mostly UK goods from Iceland, Greggs, Waitrose etc!)

We were in no hurry to rush around and do things. Our first full day was sunny. We just did a lot of walking.

We met friends of friends Brenda and Colin who were involved in the walking groups so picked their brains on the assorted activities going on. There is a lot happening!. A small selection is on Javea Amigos https://www.javeamigos.com/whats-on-in-javea.php

We also decided to resurrect the jogging as we haven’t got into the walking yet. Some of it may be too “technical” for Aileen and I am banned from doing some of the Yoga stuff and circuit training etc until the tendon in my arm heals properly …which could be another 2 to 5 months!

Our “Jog” is to either the port or the L’Arenal beach area and back, so 7 to 10 Km depending on what we include.

In Spain, if you need anything you can’t find in the supermarkets you go to the Chinese Bazar!. We got twinkly lights, Christmas headgear and some tinsel !. Christmas arrived

On one of our morning jogs L’Arenal was very busy with Paddleboard, Surfers and fancy canoes …but then there is normally somebody out in the water, including dingies from the sailing club at the port.

On our jogs we sometimes stop for a coffee, or rarely even a Catalan breakfast. Half a small baguette toasted and spread with mashed tomatoes and olive oil, with Serano ham on top and cheese and fruit on the side. Often served with coffee and freshly squeezed orange juice. All that for €4.50!. It makes jogging back harder!

Javea Amigos advertises some of the music events. On Wednesday Bambula has Flamenco at 17:30 so we went along for that. Now we like Flamenco and have seen it in a number of places around Spain. In fact, we have seen the guy who was playing Guitar at Bambula when we visited Javea the first time at the start of 2018. He is very good. His son (we think) was playing percussion and later sang and played the guitar. Two girls sang/danced and played pebbles and a walking stick!

There were quite a lot of Spanish people there to watch and listen and join in the dancing. Brenda and Colin were there too. It was a good night 🙂

Another day we drove to Moraira which is nearby. It is nice and quite swish, Very boaty (but then Javea has a boaty part too). The Gulf Porsche and Ferrari etc in the yacht club car park tells the story 🙂

The SAAB was manky even before we set off from Scone after many grit-covered motorway miles before we left to get my arm “fixed” and staples taken out etc. I didn’t have time to wash it before we left. We found a jet-wash and were mighty relieved when returned it to its shiny state!

More top-down coastal exploring ensued. Not far, just to cliff viewpoints at Cap de la Nau and other cliffs and coves nearby. Stunning scenery. We even saw Ibiza in the distance!

We drove down the narrow road to Granadella. It was nice little cove but what was impressive was the English guy in the “pedal-powered” kayak with all the gear on it (rods, Garmin fish/bottom tracking radar etc.)….. and about an 18 Kg Grouper!

I asked if he was going to sell it, but he told me if a Game Fisherman sold his catch he could be fined up to €30,000!

We had lunch at the excellent Chinese Restaurant Casa Song in Javea before continuing to Denia. Denia is only about 7Km over the hill and is famous for having high-end restaurants. It is also a ferry port for the Balearics and has mile after mile of beach and beach accommodation.

Our evening wander gave us another taste of Denia, and we will be back to explore more. We were quite taken by the free solar-powered shuttle boat which takes you across the harbour to the ferry terminal/restaurants. We walked there and boated back 🙂

This brings us up to Christmas eve. More later 🙂

The Jogging has started !