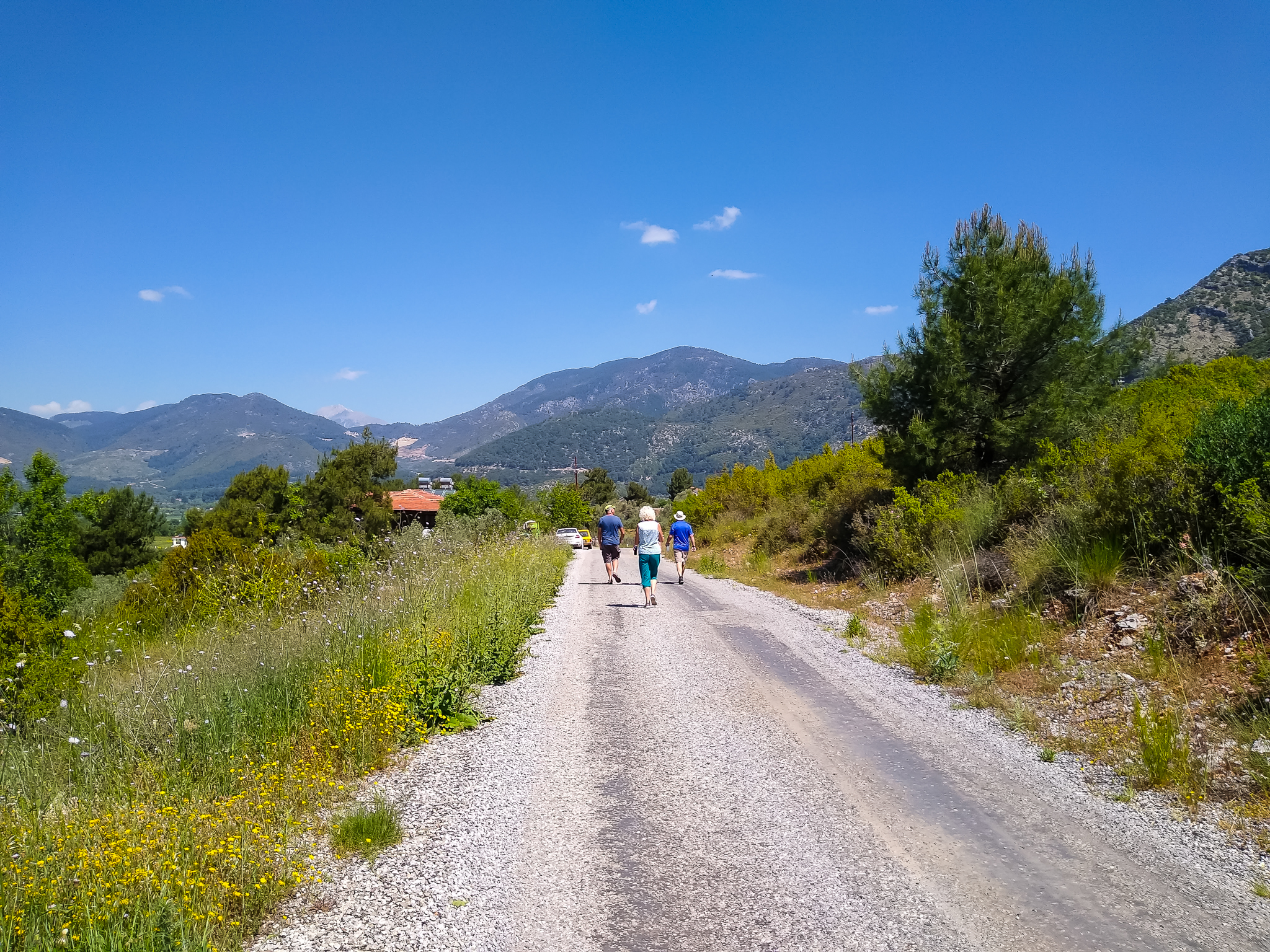 This is another snap-shot of our time ….. with a “first”.

We were still jogging quite a few mornings but that got less and less as we did other things, earlier things, and as it got hotter. Our normal route is about 5 miles round the “Ovacik Circuit” taking us past the stables, language schools, goats and houses etc. Loose dogs especially first thing in the morning are a worry.

I had seen a “Bootcamp” in Fethiye on Facebook so we decided to give it a try. The pics on Facebook made it look like a few “mature” people so we thought we could cope (despite never doing any classes or “circuits” normally!). The location was great. On the Fethiye waterfront on a bit of grass beside Denizati restaurant.

There were a lot more people there, and a lot of them were younger and fitter than we were expecting!. I thought Aileen was going to give it a swerve but she soldiered on and did really well. I has met Sian Midgley through the walks and briefly at the cycling who was also there and recognised another couple of people. Berkay ran the Bootcamp. A really tall, “cool”, very fit “unit”!. A really nice guy who was encouraging and helpful and was ably aided by Lucy his partner.

It was a hard session of 3 sets of 12 exercises. Only 45 seconds per exercise with a 15 second rest between them. The 45 seconds could seem very long when you were doing squats, press-ups, planks, burpees etc etc !. We became regulars when we could fit it in. We really felt the after-effects over the next few days!

We did more Paddleboarding (often after Bootcamp)

Our Sunday walk with “The Hash” was back in Uzumlu. It was a circular hour walk with lunch at the Cadianda Restaurant. “The Hash”. The Hash House Harriers started in Malaya in the 1930’s by some ex-pats. On Monday they would go out on a “paper-chase” to exercise off the excesses of the weekend. There are over £2000 “Chapters” Worldwide. It is known by some as ” a drinking club with a running problem!”

There is a “circle” at the start to do the “domestics and a circle at the end to thank the people who set the route, were the “trolly-dollies” (drinks), the “Hash-flash” (photographer) etc. You have to have a “drink” on your birthday if you have missed a Hash, if you are a new “Hare” (set the route) etc etc. The Fethiye Hash (we understand as we haven’t been out with them) focuses more on the “circles” and fun & games, the Oludeniz Hash (who we have been with) have a token circle with the drink being a very small glass of beer or water. very light touch!

Claire and Jeff from Dundee were the “Hares” (set the route). It was a level circular route round the farming plateau. Green, full of wildflowers, goats, grass harvesting and the snow-capped mountain backdrop. It is good to be alive!. Lunch was at the Cadianda Restaurant. The Hash lunches were all super-cheap and all were great quality. This was no exception. Tomato soup, Roast Beef or Chicken and Apple Pie!