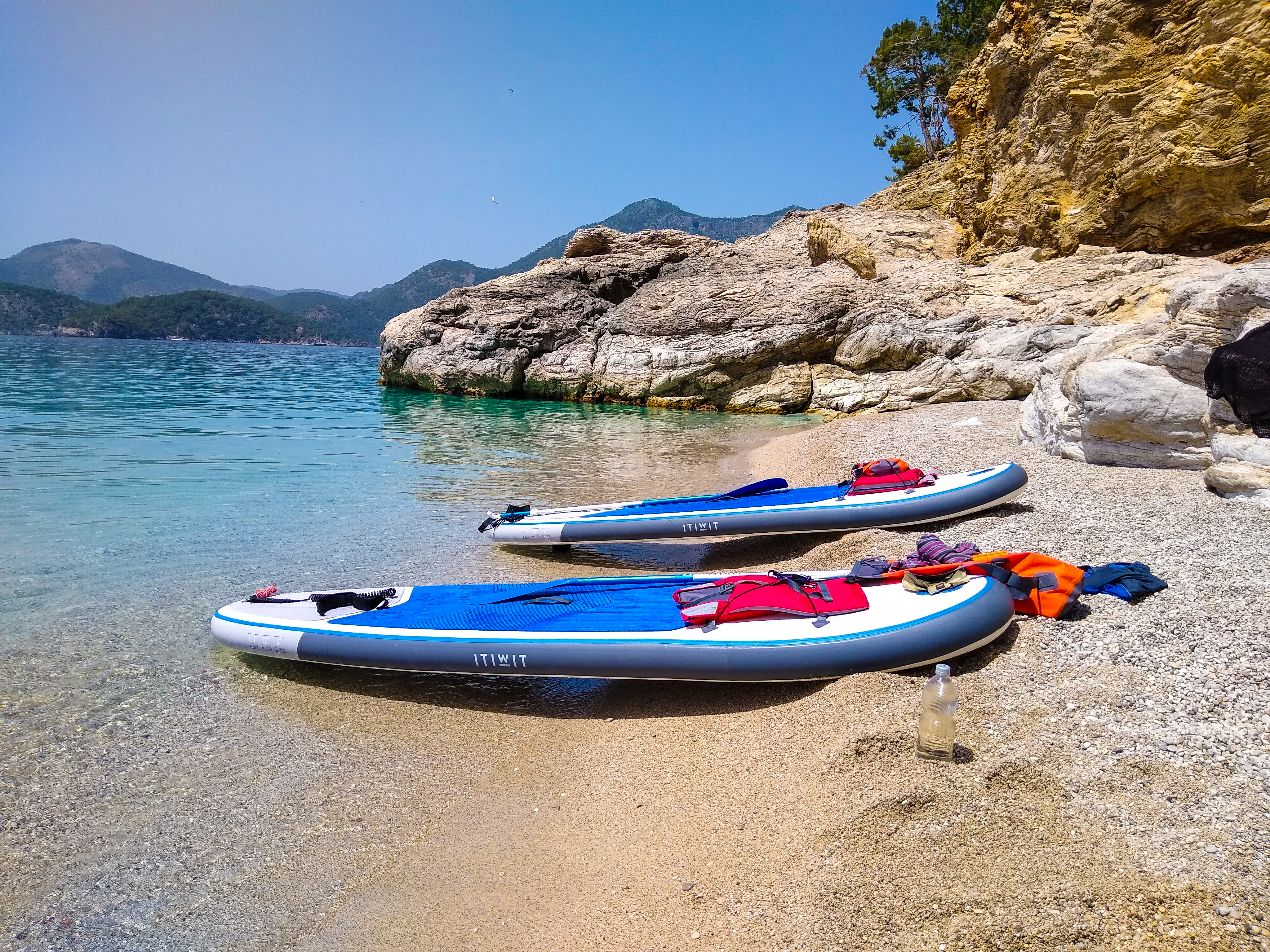 As we were so busy during our trip I didn’t keep on top of the pics 🙁 so am now hopelessly behind. This is only the start of the snippets

Yoga on the beach with Egle, Fab lamb doner at Bela Gusto at Oludeniz, a trip to Meis with the family …such a pretty place and a Greek island so close to Turkey. A bit of paddleboarding, the best kebabs at the vegetable market, the odd jog, the odd walk, and even some cycling 🙂

Edit 14/07/2019 Just getting round to sorting this stuff out. … slowly!. The first gallery is random images from our first week or so. The weather was sunny but still with a nip in breeze and cold at night. Very cold at night ….needing the air-con units turned on “heat” and the curtain in the living room closed to separate it from the kitchen to keep the warmth in!

Spring was in the air and a lot of work still to be finished outside the Villa. We had a new septic tank installed last year and changes made to the drainage. The Villa was painted outside and the marble around the pool had been changed along with marble to replace the tiled steps in the pool and the pool gutter re-tiled. This hadn’t been fully finished. The pool still had to be cleaned, grouted and filled too!. We arrived on the 9th of April. Linda, Keith and Helen were due on the 13th for 10 days,!

Ölüdeniz we quiet. A lot of the local business hadn’t even started preparing for the season and a lot of restaurants wouldn’t open for a few weeks. We kinda like it this way too

It was good to see the Buzz Bar had re-instate the roof-top terrace which was still a way from being open for the season. It looked big. We visited Cem and Baki and the team at Paradise Beach. The food is great as ever and it was really good to see the team getting ready for a season. They were open all winter as they are “local lads” but the wet/cold winter wasn’t kind to them in terms of attracting people to the beach!

Fethiye was bustling as ever. The Kefal (our favourite fish restaurant had a snazzy new plastic “awning” to keep us warm in the cool evenings. The boats were all ready for business but not many tourists around yet!.

I had decided to join one of the cycling groups so dropped my vintage Specialised Rockhopper into Can Bisiklete for a service. It came back good as new 🙂 … only 30 years out of date!….. a bit like me!

Kayakoy is always a pretty place despite the ruins of the “Greek” village being a reminder of a sad piece of history. Farming is small scale and very old school with crops being harvested using old tractors and machinery… or often by hand. In spring it’s spectacular. Lush green with wildflowers everywhere. Babdag looks impressive from the Kayakoy angle.

It was really good to start Yoga with Egle again. Sometimes at the Baracuda restaurant in Hisaronu (especially if it was cold or wet), and sometimes down at Oludeniz. We like doing it down at the beach. It would be ideal if it was deserted but there are always a few people about. They aren’t that close and don’t bother you in any event. One morning on the beach we got rained on and had to abandon play!

Occasionally if we were meeting people at the beach we would indulge in a Bella Gusto kebab for lunch. These are REALLY good. Homemade pita bread from the stone oven (like a small nan bread), really tasty lamb kebabs (strips of lamb, (not minced lamb)), “all the trimmings” and of course fresh or pickled chillies! Superb!

We did a day trip to the Greek island Meis with Linda, Keith & Helen. Its a 30 minute ferry ride away from Kas and it has a beautiful harbour. Meis is the name for the island in Turkey. It is also known as Kastellorizo or Castellorizo (Greek) or Megisti or Meyisi ! (Greek). It’s also the closest Greek island to the Turkish mainland

You sail at 10:00, arrive at about 10:30 then through immigration (you are in Greece now!). There a couple of hotels on the island and quite a lot of restaurants around the harbour. Lovely for a wander around the back streets and lanes and on towards the bay on the opposite side of the harbour. There is a small fort and a large church in disrepair. Despite the pretty, colourful harbour frontage there is a definite feel of a village which has seen more prosperous times. I guess that kinda adds to the charm too.

We had a great lunch at the family-run To Paragadi, bought our Duty-Free, then back to Meis. After a beautiful day, we headed to a cloudy Turkish coastline …and the rain came on !. Most people headed for cover but Aileen and I braved the elements !. It soon turned fine again.

I had decided to go out with one of the cycling groups I came across last year on Facebook. There are about 9 groups of different levels/specialities ….but I started with the “easy” one.

Before that, however, it sounded like the type of thing Aileen could do. We have had some decent cycles in the past so it was nothing new. We hired a bike for Aileen and went for an easy (flat) cycle at Calis. The rented bike was a good one which was also properly set up as we hired it from a proper bike shop (Can Bisiklete).

It was all going swimmingly until I turned left into a car park. Aileen was a good way back. The road was quiet, she had plenty of time …then I heard behind me “I knew this was going to happen”, then crash! She was talking about the crash before it even happened. I suspect she touched the powerful front disk brake as she was turning and the rest is history. Fortunately, no damage was done….and Aileen was OK too 🙂

We cycled back after a stop-off for a bite of lunch but that had pretty much put an end to Aileen’s cycling career. We did try again in the car park at Hisaronu but her heart wasn’t in it.

I took the bike down to Calis for the Easy Riders run which is organised by Gareth. It’s a great idea as Gareth’s premise is this will always be an “easy” ride so newcomers, returners, first-timers will always feel comfortable, and the routes will be picked to suite the least “able”. The route was easy. A cue along the new cycle track into Fethiye(although that has its own hazards!) then on to Askazlar beach just beyond Karagozler. The ride was enjoyable but the people on the ride were a blast. Some big characters and just a great laugh.

I talked to Gareth about the problem of cycling down from Ovacik to Calis then cycling back (a bigger uphill problem!) when we didn’t have a hire car. He suggested the Fethiye / Kayakoy Road / Forest track route….. shit that’s steep when we walked or and drove it!

Later that day I took my trusty vintage steed over the forest track from the Villa to the Kayakoy / Fethiye road. We have walked this track a lot of times….and it’s a good uphill pull!. The first section to the “behive” junction was OK. The next bit was the steepest… but not long. Strava said 15% but I have since learned to be suspicious of the measured gradients!. I nearly made kt to the top but thought I would stand on the pedals near the top. Schoolboy error!. As the surface was lumpy and lose the back wheel spin and I lost forward momentum (which was only at a crawl anyway! . Easy…. shift my weight back to give more grip to the back wheel…. and I got a wheelie instead!. Once again a loss of forward momentum. I had to stop and walk the last few yards as I almost ground to a halt by this stage. Bugger!

Getting going uphill on a loose / bumpy surface is interesting too. I had another walk for a few yards as the track surface had been washed away and it was bumpy bare rock, but other than that I made to the Kayakoy road and back much more comfortably than I expected.

I got great views of Babdag cycling back as we never walk this track on the way back to Ovacik. I passed pony treckers (2 groups) on the way back which includes passing a huge Kangal dog (about the same size as a horse!). A high herd of shiny, well cared for goats joined the track just in from of me and I followed them camera in hand along as the track until they turned off.

The last gallery is a local mixture. We visited Casa Margot hotel in Fethiye for breakfast. The breakfast was nice but the views are fabulous. It is in a great spot as it sticks out a bit from the hill so you can see down the coast to both Karagozler and the waterfront where the day-boats are.

We had the odd walk and visits to Paradise Beach for paddleboarding (and often lunch !)

We tried the paddleboards from the main Belcekiz beach at Olu Deniz. It was a bit more “bumpy” than the lagoon but we paddled up to a “secret beach” near Kidrak beach. It was refreshingly litter-free. Just a small cove at the bottom of a cliff with nobody else there. At that, an elderly tanned gent (we think Turkish) came down the cliff, stripped off an went in for a dook!. We didn’t hang around long!. We later discovered it was also known as the Nudist beach!