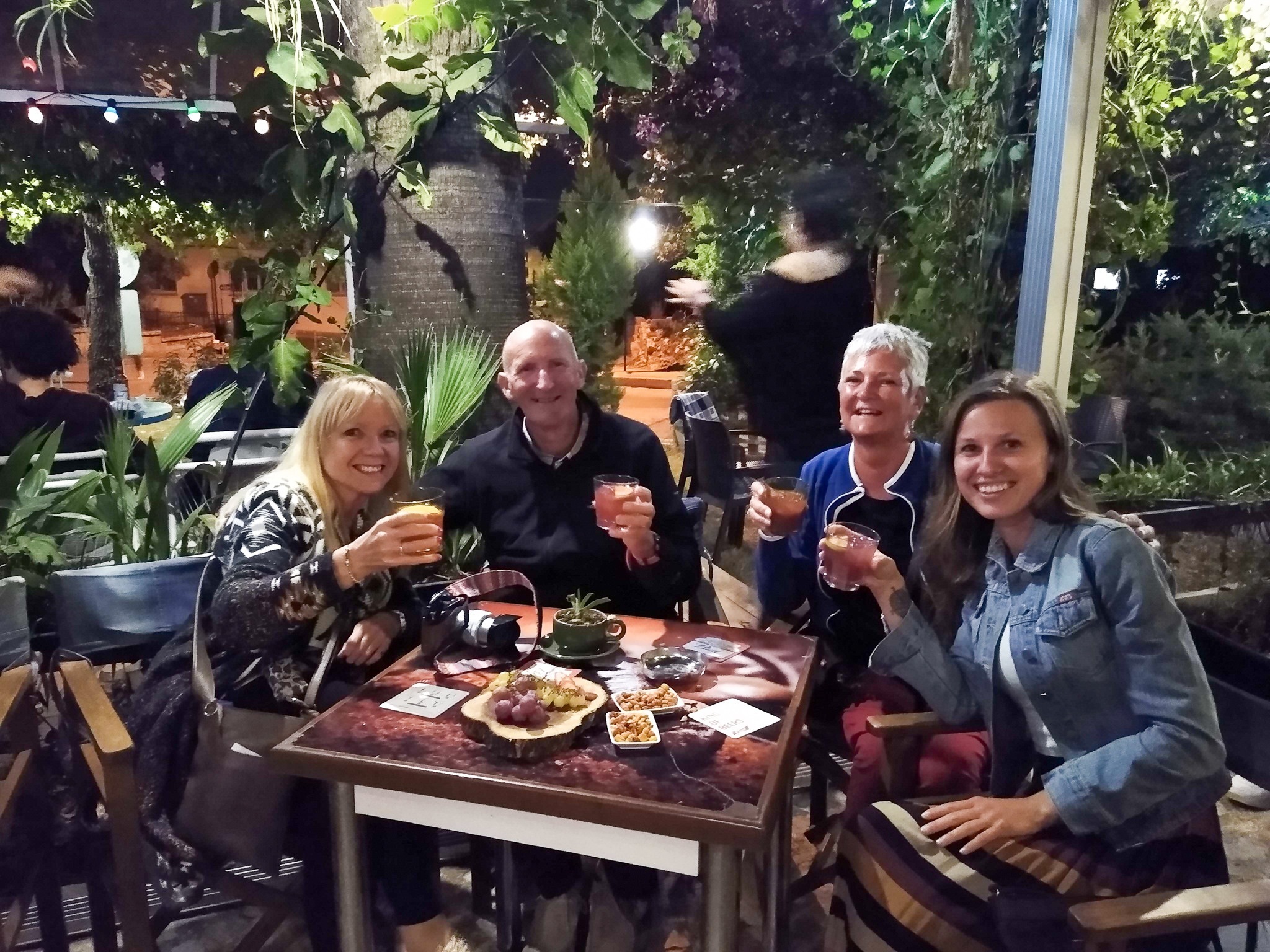 Note: A photo-diary for ourselves rather than a work of literary genius 🙂

Our last week in Turkey was blessed by more exceptionally fine weather making the thought of leaving even more of a wrench. That and leaving our chums ?

Yoga with Eagle as normal. It’s moving to Barracuda both Monday and Saturday soon and pushing back to 09:30 now “winter” is due. It is still high 20s C in the shade and beach yoga is still happening if the weather is good enough for a last-minute change of plan.

Aileen, Natalia, Eglė and I hit Abrakebabra for a coffee. It tickles me super-chic Natalia also has cereal from a plastic bag and two fried eggs on toast! She isn’t really a greasy spoon kinda gal!

We gave Eglė a lift to Fethiye for her Turkish class and went onto the ESNAF for my MRI scan (after it was cancelled on Friday night then nearly happening on Saturday). It took a while but job done for £65! Back on Tuesday for the results

A couple of chores were done including key-cutting, buying some Turkish Delight from the tiny “factory” (think large cupboard), and having freshly roasted coffee, the ground and sealed for a present.

We had dinner out at Abrakebabra with Ann & John. It feels like we have hardly seen them, we have both been away so much. It was nice. to catch up

Mmm …seems to be a few hospital visits featuring here!

On our way to get my MRI scan results, we visited El Camino for a bit of lunch. We like it there. A backpacker hostel frequented mainly by young cool locals. It has decent grub and different beers and cracking elevated views over the Marina.

Nothing new with the MRI scan. No new diagnosis, just let it get better. I got a copy on CD and the Radiographers report in Turkish (bicep tendon ruptures)

The weather was cracking so we headed to Help Beach Bar for a coffee and a chill by the sea. Very nice

I tried to copy the MRI CD….how old school!. Neither of my last two laptops have had a CD Drive. I had a couple of ancient laptops in the Villa which did have CD drives. One was Vista and one was so slow it barely has enough puff to load the OS!.

One of them tried to finalise the CD and corrupted it ….Grrrr. Back to the ESNAF to get a copy!

The Ramblers walk was a repeat of one from Sarala Koyu near Dalaman to Cleopatra’s Baths. There are loads of these around the Med. She must have been well dirty!

Dalaman is an uninspiring wee town close to the Airport. The drive from there to Sarsala is stunning n on the other hand! Nice countryside, the mirror-like lake below cliffs, then hairpins down to Sarsala Bay. WOW!

When we did is in Spring it was roasting and during Bayram (the 9 day holiday after Ramadan when everybody is on holiday and on the beach !). The walk was quiet but the car-park was jammed. Tne bays were full of luxury yachts and day boats and a cast of thousands at Cleopatras Baths

The linear return walk was only about 10Km but it is mostly single-file and rocky or loose under-foot in places. It took a long time for the distance last time.

Aileen decided not to do the walk this time as its not her favourite type of terrain. Egle came along to this one though as she didn’t know the area.

If anything it was even more spectacular this time with better temperatures and very few people at the Bay, or the Hamam and hardly any boats. The colours of the sea and the forest were intense. We didn’t swim this time although the water was vivid blue and crystal clear. I would have loved to if there was time.

Aileen did her own Ovacik walk so as not to miss out!

We popped in by the ESNAF of our way back to Ovacik and for the MRI CD !. Better be more careful this time!

Our 2nd last full day and we were both feeling pretty knackered so we had a rare chillout-day by the pool ….and started taking down outside decoration and solar lights etc.

Aileen and Joy and I had an excellent meal at Denizati. Very impressed by that place!

Yoga was due to be at the Barracuda but the weather was great so Natalia suggested we head for the beach.

It was empty….but a bit pongy !. End of season septic tank work was underway!

We headed further along the beach and pretty much escaped the pong. That pretty much worked…..but we picked up a pack of street dogs (just like often happens at Bootcamp !). They just want company. It not unusual they just settle down for a sleep as you do your thing!

Natalia is extremely polite, well-manicured and well-mannered…we saw her darker side as she went Wild-Woman-Of-Wonga to chase the dogs away 🙂

It was a good turnout of 8 people including Joy who gave it a try for the first time.

Aileen and I went back down to the beach for a chillout and a swim. That’s our first time doing nothing at the main beach in two months! The water is warm and perfect for swimming.

Egle joined Aileen and Joy and me for our last supper at Kukina in Fethiye which was excellent as usual. We then walked along to Kose Kahve which had live music.

We were all really impressed with Kose. A small coffee house off the beaten track a bit. They roast and grind their own coffee. At night the serve drinks and the serve food at times also. The music was a guitarist singing Spanish and Turkish songs.

The audience was mostly cool locals kicking back and singing-along with the odd bit of dancing, It was still in full swing when we left after midnight.

A brilliant last day spent with my favourite Ladies 🙂

It had to come. We didn’t have to do a full-scale lock-away as we are next in the Villa. Egle came round for coffee and some bits and bobs we had for her.

We nipped down to Paradise Beach for lunch and to say bye to Cem, Rebecca and Muhi……and to give Rebecca our spare cheddar cheese!

It felt much harder than normal to be leaving. The superb weather has had a part to play in that but we will really miss spending time with all of the brilliant people we have met.