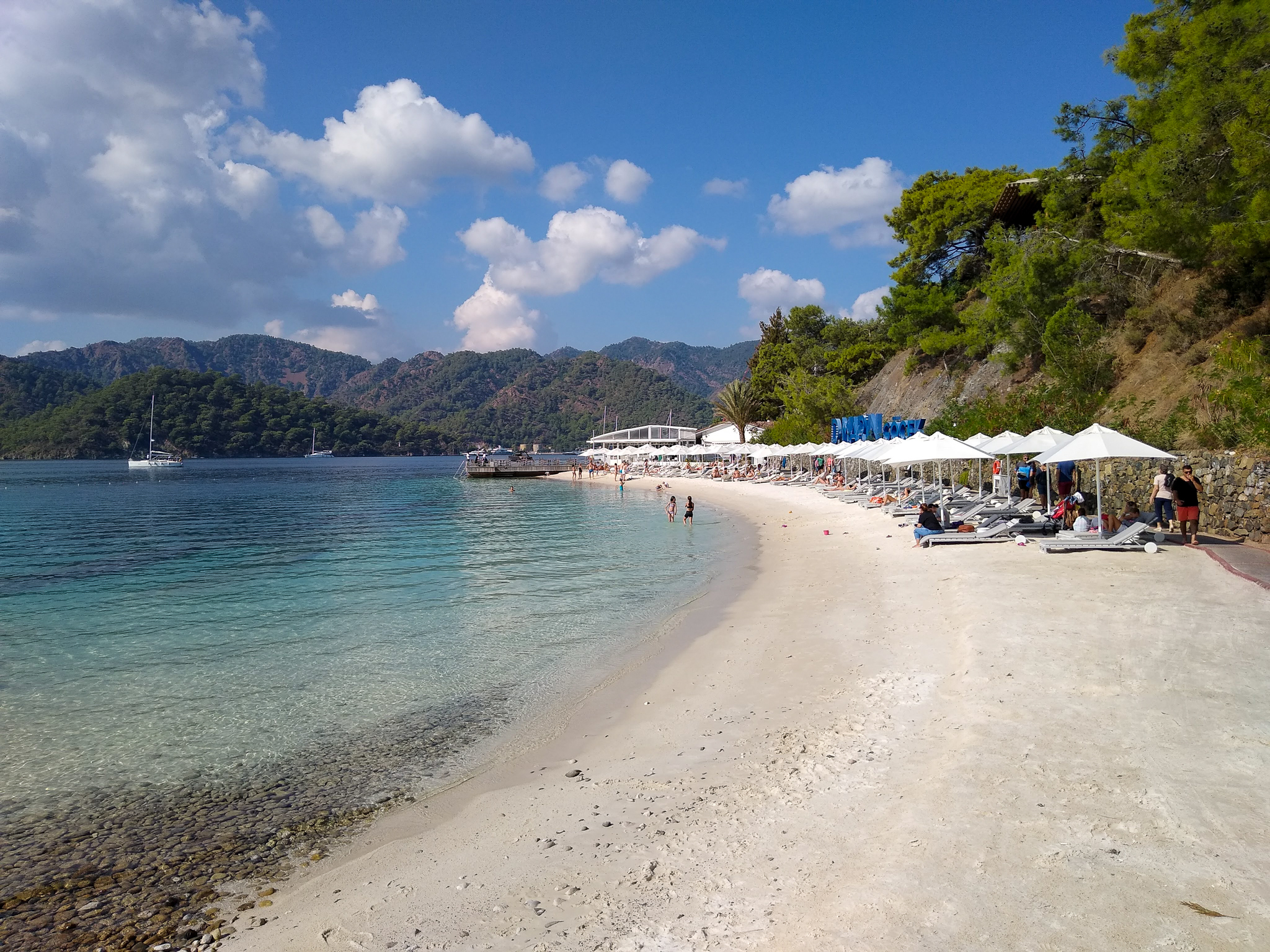 If you are one of the few who read these ramblings, just a reminder these are just photo-diaries for ourselves. They aren’t intended to revolutionise travel-writing… or even be entertaining to others!

OK maybe I was a bit premature with the “Count Down” Blog. Still, a couple of weeks left in Turkey but the end is approaching fast!

Yoga with Eagle followed by a coffee is a great way to start the week.

We haven’t seen Jim since he tore his Achilles Tendon as getting around for him has been difficult. Denise picked us up in the afternoon and we all had lunch at Bella Gusto. Aileen and I had the lamb kebabs (great as ever). The Lasagne looked good too however!

Kayak / SUP try-out day with Barbara & John. Barabara was keen to give them a try. We took our two rigid sit-on kayaks down and we deflated the SUPs and put them in the boot. John brought his sea-kayak and Rasmus came along to the Lagoon with his sit-on also.

Barbara did own a kayak before which was stolen, but she was still a bit nervous. That didn’t last long ! A cautious paddle into the lagoon, then it was like a duck to water! I think we have a new convert!

Next up was the SUP. That is a bit trickier but she had a paddle on her knees to get the feel, then up on her feet… I was ready to steady the board just in case, but it was enough to give her a feel it was doable.

The time passes so quickly when you are paddling around in no hurry and nowhere to be. It was lunchtime so we all headed to Paradise Beach and all went for their excellent fish & chips. It’s local Mezgit (one of the whiting family) which they buy from the market and fillet it themselves. The batter is crispy and served with tarter and home-made chips. We were all ready for it!

Cem and his son Aslan had a quick paddle before we left. Aslan had originally thought our SUPs were dangerous and wasn’t keen to go on one, but he seemed to love the kayak!

We paddled back to the car and loaded up. That’s when I hurt my arm 🙁 When lifting the kayak onto the pick-up roof I felt something “crunch” (tear) below my bicep. It wasn’t agony but I knew it wasn’t good news.

We managed to get the kayaks off the car when we got home (after a fashion). I Googled the injury …it sounded like a Bicep tendon tear. The arm was moving OK but I couldn’t do a bicep curl with anything heavy (Quelle surprise !). Being a Google Doctor is never a good idea as you read about all sorts of bad outcomes and possibly surgery needed ….which had to be done soon after the injury….

I emailed the Physio I used in Perth for a knee problem a while ago. Rachel from Caledonian Physiotherapy rang right back and I had a chat with her about it. She recommended I see a Physio in Turkey for their opinion.

The Ramblers walk today assembled in Hisaronu, then it was down to Kayakoy. Egle came along to this one …her first Ramblers walk. It is these which have prevented us from going to Yoga at Kabak on a Wednesday.

It is a walk we have done before and it is on parts we have walked it a number of times but it is still a great walk. Through the lanes of Kayakoy, passed Lycian Tombs and Rock Tombs, up the forestry track at Belen past marauding (but thankfully chained) dogs at Belen. The views are superb over Kayakoy. Baba Dag looks impressive from this angle…..then you get the views over Fethiye Bay.

The twist is a track we didn’t know about which takes you through the forest and into what must have been a very old settlement. There are no buildings as such but there are some amazing old trees. I have no idea what they are,…. maybe some kind of nut?

After the walk Aileen, Eglė and I went on to GOGO Eatery in Calis as we had heard good things about it. We popped in past last Saturday and had a chat with the owners Gökçen and Gökhan a sister and brother.

They have a boutique in Hilton Sarigerme and Gökhan trained as a chef in Italy. They have some great ideas for their shady restaurant with the tables widely spread out amongst the trees.

Their menu is refreshingly different to others. We even had a taste of their homemade beer they can share, but can’t sell. It was excellent!

The food was really good. I had a Confit Ribs bowl, Aileen the burger and Eglė the vegan burger. Thumbs up all round.

My hunt for a Physiotherapist hadn’t gone well. A few had gone home for winter (even healthcare scales down staff at the end of the season). I went to the ESNAF private hospital instead. As we are Residents it only cost 110Tl (about £15).

The physio prodded, and went through assorted arm movements and concluded the arm wasn’t too serious. Just reset it and no heavy lifting. Good news.

It was a beautiful day so we walked into Fethiye for an explore. With a comfortable temperature and very few people, it is a great time to explore.

As usual with us, it was restaurants and cafes we were “exploring”!

Tina, Tony, May and Robert invited us to a Halloween do at the Nil Bar in aid of Hayed. We did look for overalls in Fethiye so we could transform ourselves into Ghostbusters… but no joy. Fethiye isn’t big on guising!

My phone rang not long after we arrived at Nil Bar. It was Rachel the Physio from Perth. She had been discussing my emails with the most senior Physio in the Practice. His advice was if I could get a MRI scan I should so they could see what hat torn. Apparently these type of injuries can appear not to be bad, but they can be problematic later, by which time it is too late to repair it…. Oh joy….but pretty much what I had read on the Internet.

Anyhoo…. back to the party!. Some of the costumes and makeup were fantastic. We went on to the Meri Bar which was a new one for us. Onur Arcelic was playing. They are fantastic, playing a huge variety of genres and styles and really putting their own stamp on the songs. A wee bit of jigging was involved…. and a very late night for us!

Yoga then down to the ESNAF to arrange a scan. I had to see the Physio again to get the scan. He told me it wasn’t necessary but we eventually agreed I wanted one anyway! I emphasised I wasn’t questioning his diagnosis, but I could get one done in Turkey easily and cheaply. If I needed one in the UK it would be difficult and expensive.

Appointment made for 22:30 that night!

Unfortunately, it was cancelled due to a problem with the machine… but at least they cancelled it before I got there!

I was in two minds due to the bicep problem, but I but Yoga had been OK as nothing was using bicep strength. I thought padelling would be the same as your arms are held in a locked position and you rotate the torso rather than pull on with your arms…. which would have been a problem!

The bigger problem was how to get two 22Kg kayaks onto the car roof as I had been liftinv them on and off myself. Something not possible (for me) with one arm!

I hatched a plan…!

The rug from the villa and a sheet was used to lay over the car bonnet and windscreen. We laid the kayak’s nose on the car bonnet. Aileen pushed, and I pulled with a cord attached the kayak. It slid easily onto the roof with no drama and arm unharmed!

The 2nd kayak was more tricky as that had to lie sideways against the first one.

We got it onto the roof the same way but in the process of turning it one-armed, the other one fell off the roof…. doh! Fortunately, these things are tough!

We had another think and hatched a revised plan to get them on without another calamity!

The plan was to kayak from Karaot Beach past Günlüklü. There were 10 of us (it clashed with the Rugby final or there would have been more)

I could see immediately Aileen’s kayaking coaching had worked wonders. She was making much better progress and looked much more comfortable and was paddling at a controlled rate.

We stopped at a bay past Günlüklü for a slice of Denise’s excellent lemon drizzle cake! We paddled on looking for any more picnic / camping stops (for future), and but the advance party didn’t see anything promising so we headed back to Lemon-drizzle beach!

We had the obligatory BBQ then headed back. Terry had to leave before the BBQ as his wife had taken ill and he had to hurry back. Dave accompanied him for safety reasons and to help him load the kayak onto his car roof.

These coastline paddles are fab ?

This was our last “Sunday walk” until next year. A nice little stroll round Koca Calis seeing new parts we hadn’t been to before.

We didn’t stay for lunch. We carried on to the Wobbly Boat Race at Gocek.

This was great fun after our Calis walk in the morning.

Gocek is more like the Cote d’Azur than a few miles outside Dalaman!. You can sniff the money.

Brimming with yachts, the Tennis club, the Little Venice housing on a “canal” where you can moor your tender, the imported golden beach sand you can use at 50 Euro a pop…..but all very pretty.

The teams started building their boats at 11:00 with 4 hours to build and decorate. The materials were thin bits of timber and marine plywood. An impressive array of power-tools, saw-benches, sanders etc were on display…and lots of silicone !.

The decoration of the boats was brill

We didn’t realise Robert, Sue, Clive and Maria were building a boat. They built an Indian canoe and dressed accordingly.

We had a chat with Alex who worked for D-Marin (The Marina where this was all happening) She has been running the event for 10 years. They were building the Plastic Monster using plastic they found in the bay to decorate it. When I mentioned we had been kayaking she asked if I fancied paddling their boat! Fortunately, I had an injury to save me the embarrassment! Their boat went on to win comfortably.

We had a nice lunch at Joy which was close to the Marina and looked expensive but was actually reasonable and great quality.

The Plastic Monster won easily….but they had a lot of experience.

Sadly our friends didn’t make it far from shore. It was a bit “capsizey”, but hats off for the effort and the fun.

The wee-guy in the inventive boat with the keel didn’t get far either. The poor soul looked really upset. Probably scarred for life!

A fab afternoon out and a great Family event