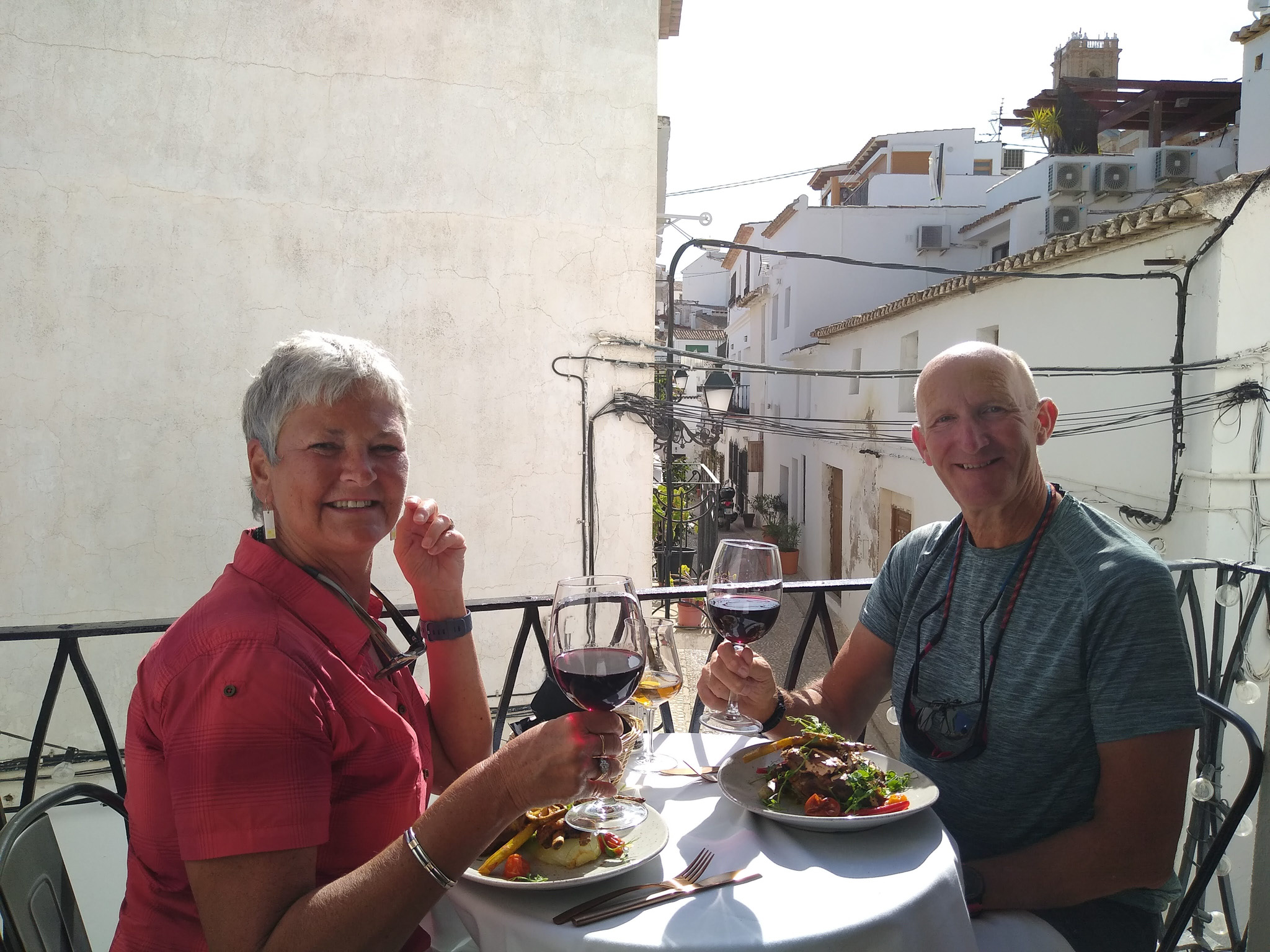 Ten weeks passes really quickly, …….especially after having had visitors for three of them.

Our last day in the apartment was 29th Feb and we had to be back in Scone for the 6th March for Madamme Butterfly by the Russian State Opera! We made our plans to drive up to Ijmuiden near Amsterdam to get the ferry back to Newcastle and so have a short end-leg home.

Before all of that, we re-visited some local places and had a bit more of a chill-out.

We have been up to Col de Rates a few times and enjoyed the fab drive and views. For assorted reasons, we have never “finished it off” by walking from the car park and restaurant where most people stop, up to the top.

It didn’t look far and it had a road at least some of the way up, as we saw a transit van coming down the first time we were there after dropping off paragliders.

It was more than 300 meters up to the top and steepish in parts despite it being the road. It was a good hour up and a bit less down. Only the last section was a path. A few mad cyclists made it to the top. It was a stiff climb for them!. The views were even more spectacular from the top.

There was also a manned fire-watch station at the top too as they could see for miles (or is it kilometres!)

A shared Currywurst and Strudel at the German cafe washed down with a Tinto de Verano and a zero alcohol wheat beer was just the job!

On a nice but windy day, we had a short walk out to Cap Prim. We had a chat with a family from Montrose! Stunning scenery, blue sea and sky and crystal clear water.

Onto Altea on the back roads for our “free lunch” at Bistro Shabby Chic which was an apology for our underwhelming previous visit.

We met Kevin the other owner. Andre who we met on our first visit wasn’t there. Apparently an elderly Norwegian lady had been dining there last night when a local workman backed his van into her parked car. She went out to “discuss” it with him….so the workie punched her in the face and booted her car !. Andre had to go round to the Police with her to translate!

We were offered the balcony table. Compact, but nice views. We could have ordered from the à la carte, the menu del dia, or the “special menu”. The town has regular foodie events. This one, the restaurants had to come up with their signature dish menu. Customers rated it for value, quality, service etc …and I assume somebody won eventually.

An amuse-bouche of mushroom soup and polenta empanada, oven-baked leek with a poached egg in hollandaise sauce, Slow cooked pork ribs, crisped and served with pak choi and other roasted veg, and finished off with cheesecake. Cava, wine, alcohol-free beer, coffee etc.

Kevin and Andre are excellent hosts. Chatty, friendly and not “formal”. The food was excellent, cooked by their Dutch, French-trained chef.

They talked about some of the challenges running a business in Spain and all of the hassles and barriers set by the local council and the church-wardens (as its a conservation area)….and the main-man lives opposite! Their absence on our previous visit was because their lawyer called them and told them they had to sign papers that day. What do you do ?. Finding good staff and retaining them is also a challenge especially in winter ….you might have thought it was easier ?….but many service professionals come to work in summer then go home in winter.

It was a really nice meal and experience which they genuinely wanted to provide free of charge, but we left them a generous contribution…..which they really didn’t want to take!

We had also wanted to walk up to the wee white church on the hill above Xabia. It was a bit of a challenge finding the path, but good old “Map Me” App came to the rescue again. It’s brilliant for showing footpaths, unlike Google Maps which is rubbish for that type of thing.

Another steepish pull with great views then back down the other side for a cold-one!

I decided to top up the SAAB’s oil before driving back up to Scotland. It will be about a 6000 mile round trip, and despite the SAAB running well and performing well, she is an old-girl with over 100,000 miles on the clock, and these SAABs are known for “using” a bit of oil even when new.

Do you remember when putting oil in a car was a simple as Castrol or Duckhams?. Nowadays all the oils may have several versions matching specific car manufacturer specifications …..none of them SAAB however!

I messaged Willie at Perth SAAB who has been really helpful. He told me the spec of the genuine SAAB oil which is in the car. Fully Synthetic to Dexos 2 specification. Nothing in the filling stations matched that.

It took a fair bit of Googling but I found a link on the GM (General Motors site as SAAB was latterly owned by GM), which explained Dexos 1/2 was a GM oil specification….and it listed all of the oil brands from all of the oil manufacturers which complied with Dexos 2. I now knew what I could safely buy!

Sounded good but I still couldn’t find the right oil. Brainwave!. Go to a GM garage and buy it from there. All their cars will use Dexos2. I found one on the way to Altea who were very helpful. The didn’t sell 1 litre containers but they said they would fill one for me. I suggested they just top it up instead ! 🙂

It took 1 litre and all was good. The invoice (they wanted a home address and passport number etc!). The invoice said they had put in Dexos1, Gen 2. I later discovered that’s what they use in Petrol engines (which mine is), and use Dexos2 in Diesel engines, although the SAAB Dexos2 and some other Dexos2 can be used in Petrol engines also.

The Fat Lady has sung

It had been a good winter stay in Xabia. We still really like it as a location.

Some things didn’t work out as we hoped when we booked the apartment a long time ago. I didn’t join the Paddleboard club due to my arm surgery. We didn’t join the walking club initially as Aileen’s knee was too painful for long walks on rough terrain then later we just had too many other things to fit in.

The weather was pretty decent. Hot sometimes, but often thin fleece or jacket weather, but mostly dry. There were only a handful of days we didn’t spend most of the day outside.

The apartment was in a good location and well equipped with gas central heating. We thought having a ground-floor apartment with a garden at either side of the building would be good for the sun and nicely sheltered. The high hedges were quite close and gave good privacy and no-doubt welcome shade in the summer, but in winter they cut out too much light and the sun was low in winter so the gardens didn’t get a lot of sun. This all made the apartment really dark. It was often a surprise how nice the weather was outside!

We both agreed, much as we enjoyed our 10 weeks in Xabia and the weather was way better than Scotland we really missed the “touring” element of this holiday. Driving to Spain was enjoyable as we had time to make it interesting. Driving back was mostly Peage to minimise the duration.

Probably if we do something similar again we would probably spend shorter amounts of time in more locations…..kinda like we did the last three years!

And the SAAB ? Brilliant!. It’s not cheap driving to Spain and back (ferry cost, fuel, breakdown insurance, 7 nights or more accommodation and food etc.), but we really enjoyed having the convertible. It would have cost a fortune to hire one in Spain even in winter. To hire a budget car is cheap ….but it wouldn’t be the same!