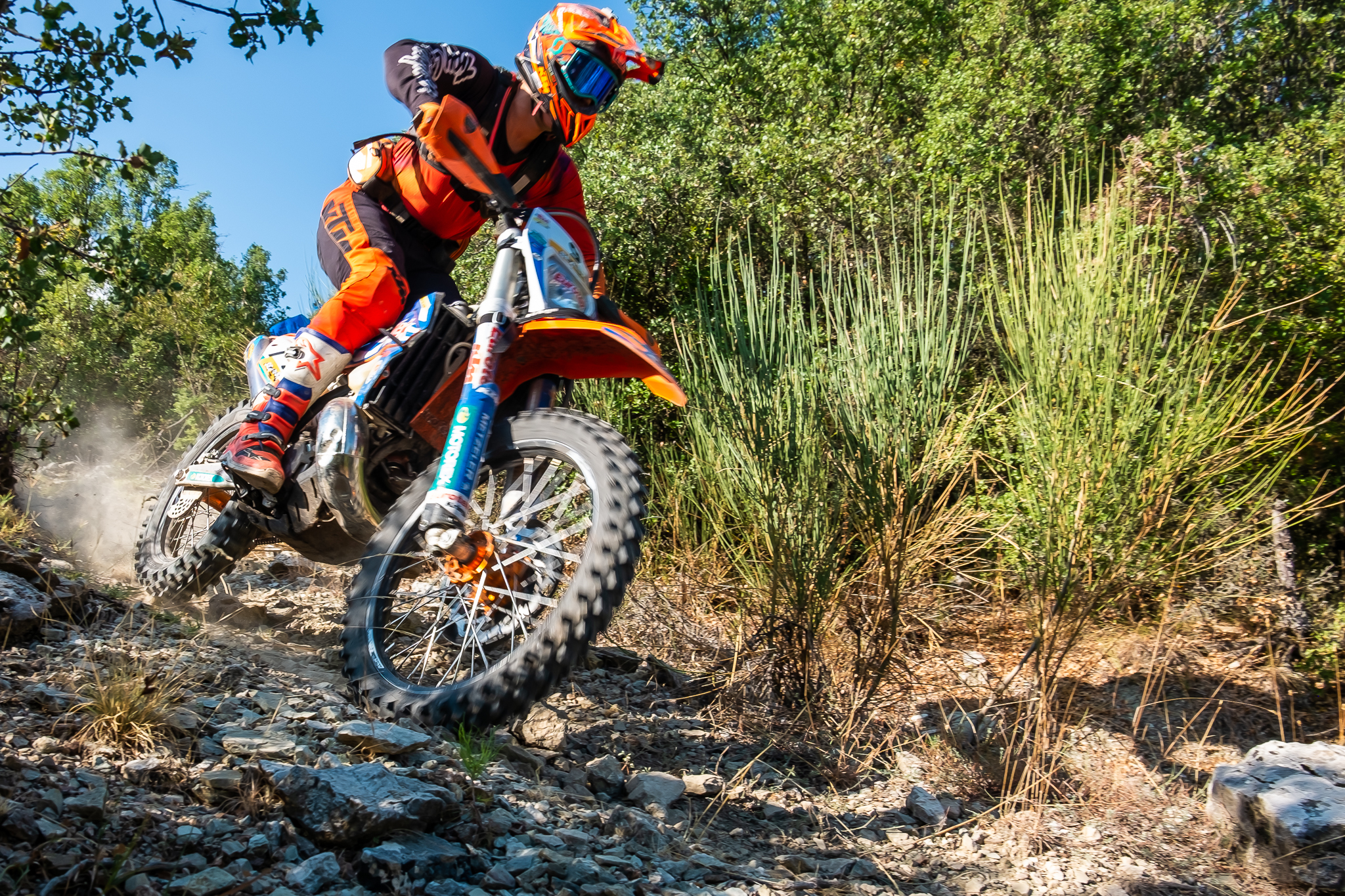 Thursday brings us the Forest Race, which was a loop close to Kemer. Rob had downloaded the map which showed where the Spectator Stages were.

We met up at Crystal Aura at 08:00 and headed off. It was a beautiful day. The drive up through the Canyon into the rugged mountains is breathtaking.

We got to our destination at the “Checkpoint”. There were no other spectators, just 2 guys doing Checkpoint duties. We hiked along the narrow track until we came a to the tricky part which looked like it would be interesting. The usual dilemma was whether a better vantage point was further along or further back.

The bikes came through and I got some good shots. We were spread along the track a bit for different vantage points, but we weren’t able to see each other due to the high bushes.

Then we heard a “Help, Help” shout from Aileen !. Shit !. We thought someone (Aileen ?) had been hurt!. We all rushed to the anticipated bloodbath, only to find an agitated rider trying to knowck his bike back into shape after clattering a boulder. He had asked Aileen to hold the bike upright as he booted the gear-change or peg back into place !. Aileen isn’t used to holding motorbikes upright hence the cries for help!

The rider took off after a few seconds chuntering about “F***ing rocks” ! They take it seriously and every second counts, even on an extremely tough 4 day event!

We watched some more, the had to walk back down this narrow track. Constantly listening for a bike or bikes coming so we could leap into the bushes to get out of their way! Probably Aileens worst nightmare as she isn’t fast on downhill, loose stuff…and some of this was downhill and loose! I had to confiscate one of her walking poles to try and speed her up, and dragged her along by the hand!. We all survived to tell the tale.

The postscript to that was Rob realised that night we were spectating from the wrong places ….which is why there were no other spectators and there wasn’t a sign saying “Spectator Point #” !. We should have carried on a bit further to where the Spectator Point actually was !. Not Rob’s fault, as we all should have twigged and the Checkpoint Marshals should have said!

The above may explain why one rider stalled and threw the girls a filthy look. He probably saw spectators where he wasn’t expecting them and thought “this must be a difficult bit”!

We drove back to the bridge over the canyon to see the riders coming down the rocky river-bed and up a steep slope to the finish.

We chatted to a few people. I spoke to a family from Fife supporting their son Stuart Mack (Big Stu!). He was in the top 20 which is very good, He had been travelling in Australia and hadn’t been on a bike for 3 months. He looked big on a bike. We later discovered he was 6′ 5″. Probably makes dragging a bike around a bit easier!

This was after Thomas Cook collapsed, so there were also assorted conversations about getting flights home. There would have been a lot of devastated people if they hadn’t been able to fly out to compete after a year’s planning and saving.

The riders looked tired. Some had a bath in the freezing cold river. There were a number of characters about! Families and partners re-united, and competitors congratulating each other and sharing stories before heading back to prepare for a harder race in the Canyon the next day.

As we walked back to the cars we were amused by two police motorcyclists on a bike. The pillion was massaging the riders neck and shoulders 🙂 Never seen that in the UK!

“Crystal Crowd” headed back to their hotel. We had another wander round Kemer. We couldn’t get into the Paddock, unfortunately.

Our 2nd attempt at Kemer didn’t help. We walked past the harbour/marina you can’t access ….. Decided to go to a nice-sounding cafe alongside the harbour ….closed!. The beach and bay to the east of the harbour looked nice but packed. We had a wander round a peninsula which was better ….but it was a dead-end with barbed-wire and threats of being shot, when it would have been really easy for them to make it a path you could continue the loop.

Click on the pics to open a Gallery with captions