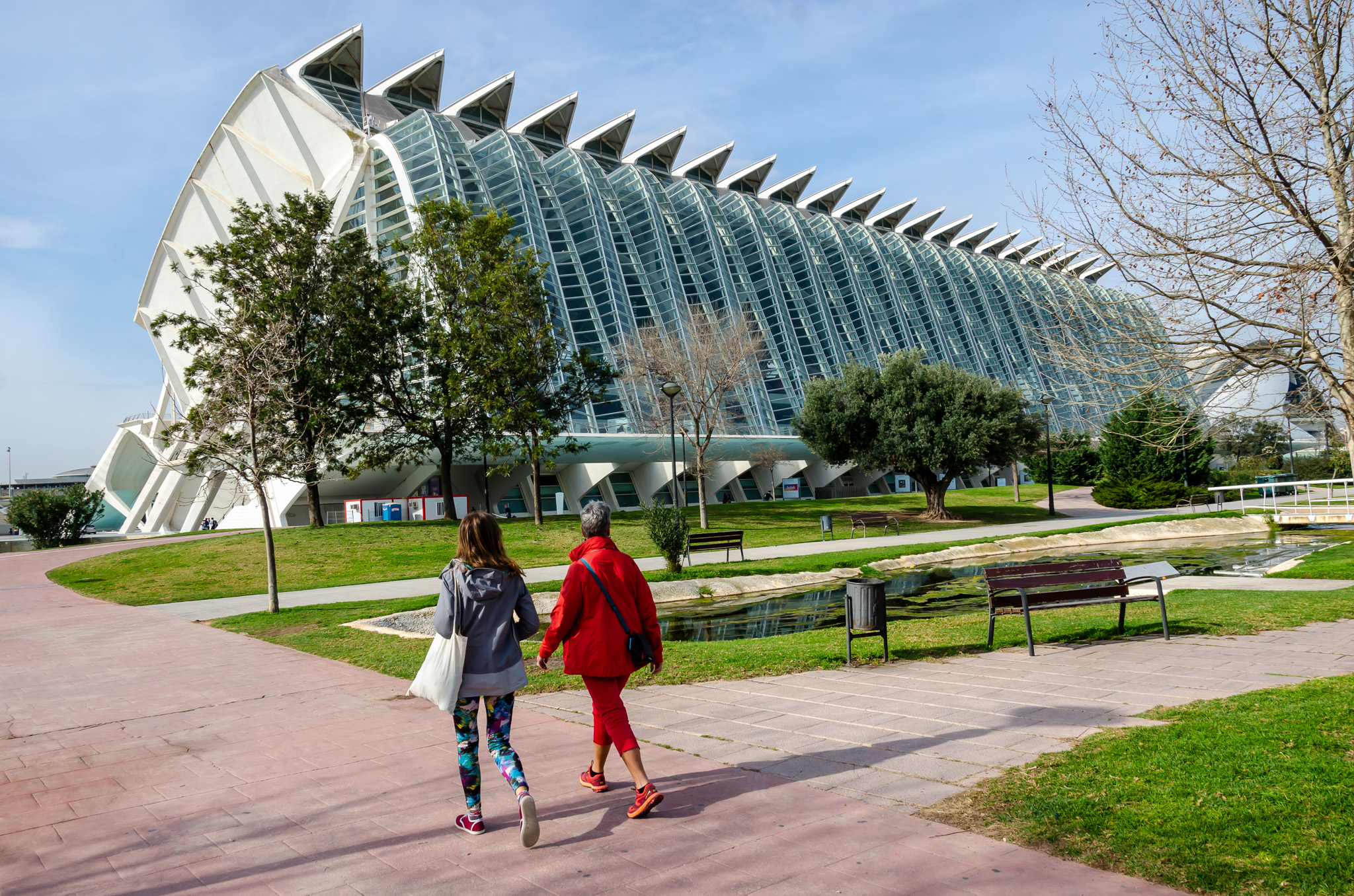 Eglė our friend from Turkey was due to fly into Valencia the same afternoon Kenny and Moira left. The plan was for us to pick her up at the airport.

Sadly, she was due to fly from Dalaman to Istanbul the previous day, only hours after the Pegasus crash where the plane broke into 3 parts and 3 people died. All flights to and from Istanbul were cancelled.

Eglė managed to sort out other flights to arrive in Valencia the following day.

Aileen and I went to Sagunto after dropping K&M at the airport. About 30 minutes away from Valencia and very important Roman city and fortification in its day. Today it as also a busy port, but as usual the “Pueblo” as inland a bit and on top of a defensible hill!

We didn’t have time to explore the Fort on the hill, but the old town was nice to walk round and the over-restored Roman theatre was interesting.

A newspaper article talked about up and coming young Spanish chefs, one of which had a restaurant in Sagunto. Never look a gift horse….!

Lunch at the historic but smart Arrels restaurant was over reverential and not entirely slick as far as service was concerned. Disappointingly we had to ask for their lunch menu as they wanted to sell us “Tasting Menus” for a lot more money. The food was nicely presented and perfectly pleasant, but not “moreish”. A nice enough experience, but not on our shortlist.

We headed back to Valencia for another night in Hostal Venecia which is right in the main square. Very nice rooms, a fab location, good parking for Central Valencia and not expensive. We later discovered it has to be called a “Hostal” rather than a Hotel as private accommodation on the top floor shares the stair. It is a fab wee Hotel in every other way with lovely helpful staff.

We had our tea in our “local” Taberna Antonio Manuel.

The next day we visited the Valencia Oceanografic which gets great reviews and is the “largest in Europe”. 28 Euros each lighter, we had a good wander round. We were underwhelmed. The Lisbon Aquarium blew it out of the water (boom boom!)

We met Eglė at the airport and headed back to Xàbia. She had a very long journey with flight changes in Istanbul and Brussels.

Finding stimulating vegetarian food in Spain isn’t easy. El Bodeguila at the Port as our choice for a Tapasy / vegetarian Paella meal…… We got a carry out with the leftovers!

I’ll not bore you with the details as we now have a “circuit” (as you do when showing guests round your area). We kinda did similar things to what we did with Kenny and Moira…. and we will with our next guests 🙂

Fortunately, I am shallow enough and have a short attention span, so it always feels fresh and exciting ?. A bit like a goldfish swimming round in a bowl 🙂

A walk up to Xabia old town in fine weather. We passed two cars at a Garage which had clearly been dragged out of an underground car-park after having been immersed in sea-water, mud, twigs and slime….right up to the top of their roofs. Not pretty, and I imagine both write-offs. Both expensive SUVs

Alcalali, another of the pretty little villages in Val de Pop have a Flower Festival over February which includes walks through the Almond Trees in full bloom, festivities and special menus in the restaurants and bars. A very pleasant spot

Col du Rates was a bit cool in the breeze as there was a light mist / cloud hanging around despite the bright sunshine. It really affected the temperature. Rather than a full-blown picnic, we had a coffee huddled behind a barrier at the viewpoint! to try and shelter from the breeze.

L’Arenal , the Windmills, Lighthouse and Denia were on the list too.

We had a trip up to Guadalest but taking the high road this time which gave a different perspective, but you still didn’t see more than the jagged, isolated ridge and a couple of towers. The House and the Village were still hidden.

We drove down t the Reservoir and walked over the dam. “Someone” decided it would be a good idea to walk around as the other end didn’t look too far away and I knew it was a circular walk. I Googled the walk as we started the trek to be advised it was 9km and took 2.5 hours (from a reliable source). It seemed barely credible an “easy walk” 9km would take 2.5 hours …..or the walk actually was 9km……it did and it was ! ……oh, and taking water with us would have been good as it was roasting !

Egle’s flight was 06:30am from Valencia so we drove up the day before to spend the day in Valencia. The weather was OK but not as sunny and blue-skied as I would have liked.

We drove through L’Albufera to get to the “City of Arts and Sciences”. There are always new angles and new things you see as you walk around.

We explored central Valencia and tracked down one of the few Vegetarian restaurants!. La Lluna was tucked away and barely advertised it’s modest presence. It was mobbed inside however and we were lucky to get a seat!. The food was a set menu with assorted dishes served. It was really very good.

We came across more and more street art and a photo-shoot of girls in their traditional Valencian costumes. La Fallas (The Fire) Festival is a huge thing in Valencia during early March )1st to the 19th this year). We were there during it two years ago. I guess these girls were part of the publicity.

From a website ” Another important event is the Ofrenda de Flores a la Virgen de los Desamparados, a beautiful ceremony every March 17 and 18, that honours Valencia’s patron Virgin. Thousands of Falleras and Falleros arrive to the city from every corner of the Comunitat (Valencia State) and take the streets wearing traditional costumes and dancing to their neighbourhood or village bands as they wend their way to the Plaza de la Virgen to offer bouquets to the giant image of the Virgin.

Some Churros and Hor Chocolate were needed to warm us up. Job done !

Our evening meal was at Las Tasta Olletees in Del Carmen district. Even more street art in El Carmen!. It was another great vegetarian restaurant with interesting choices. Eating vegetarian wasn’t easy in Spain !

We overheard an American booking a taxi via the Hotel to take him to the airport at 06:00 the following morning, so we asked if he would mind taking another passenger!. Egle’s lift to the airport sorted!

We didn’t envy her long journey back to Ovacik but at least it all went without the drama of journey getting here !

So why “The Eagle has landed” title?. Eglė is “Yoga with Eagle” in Ovacik. Check out her website, or even better sign up for her Retreat in the evocative Kaya Koy on 16th May https://www.yogawitheagle.com/