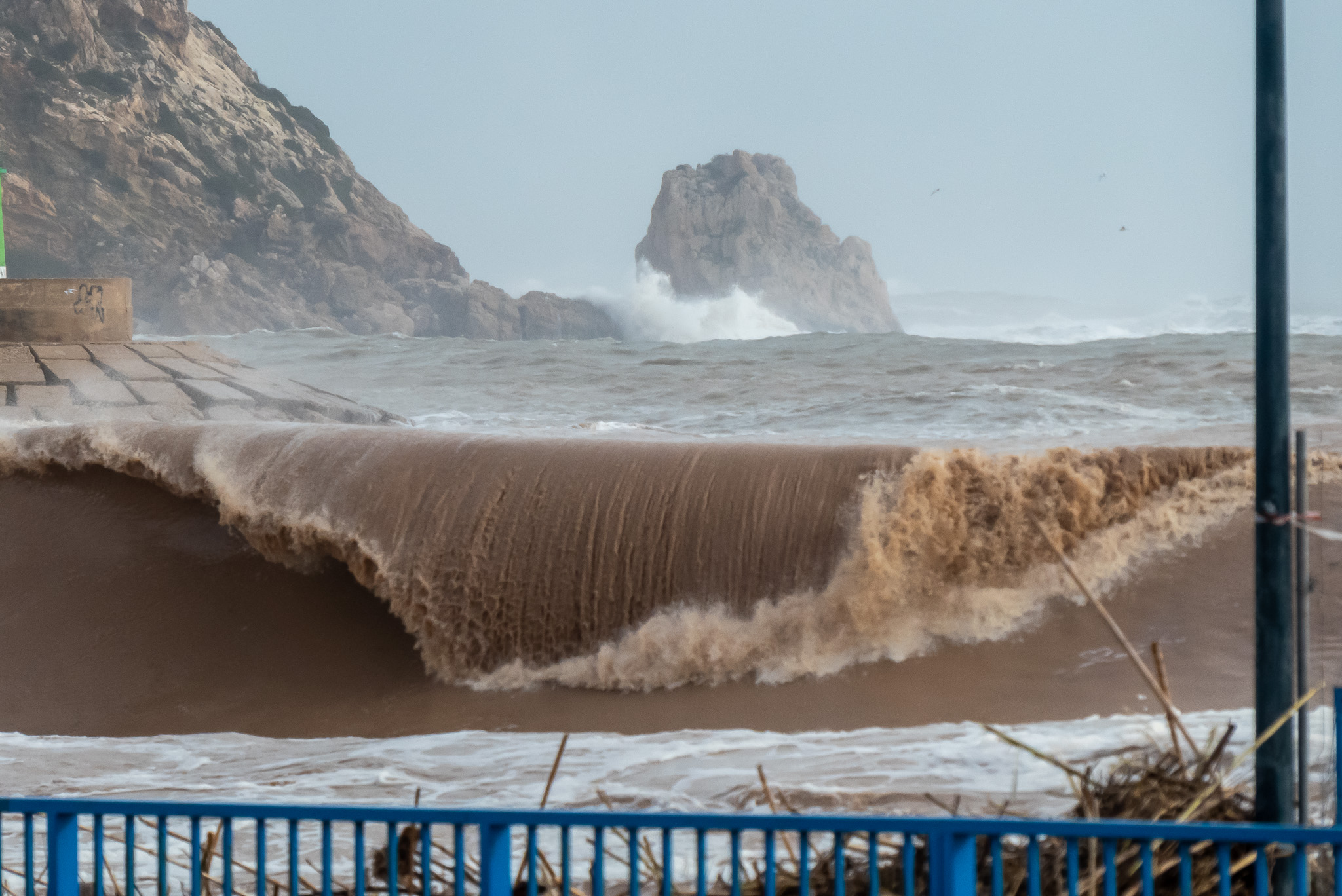 The last Blog mentioned the “calm before the storm on Saturday. It was a beautiful evening.

Severe Red Alert Storm Gloria warnings have been circulated for days, with the epicentre being Xàbia where we are staying. The alerts were not being toned down as Sunday night approached.

Sunday daytime was warm and sunny. We had a long walk to L’Arenal beach area and had lunch (a very good Indian at Kathmandu!). As we left the restaurant the skies had clouded over and the wind picked up. Sand stinging your face as you walked into it. We walked in the middle of the road to keep away from the swaying trees.

The storm was blowing towards the shore. We were relatively sheltered so it didn’t seem too big a deal overnight.

The weather broke the next morning and it was bright. We saw a windowsill had blown off our building and was on the ground in pieces. We walked the 150 yards down to the shore. The road had (broken) tape across it but people were down on the shore road.

As we approached the shore the noise was thunderous. Where we had seen the blue horizon in the distance before, was now a mountain of brown raging waves rearing up from the ocean, with the huge waves pounding the shore. The road was covered in shingle, rubbish, trees, bamboo etc. Walls were knocked down across the road and underground garages flooded….with cars in them. The shore-line was scoured down to the rock and totally re-modelled.

La Siesta and Montgo Bongo are the only two (adjoining) buildings on the shore side of the road between Xabia Port and L’Arenal. They were wrecked. All of the decking totally destroyed, furniture umbrellas and outhouses smashed into pieces. The concrete housing for catering gas-cylinders ripped off the wall and lying on the ground ….complete with gas cylinders. It was carnage.

We couldn’t walk along the shore road so took the parallel road. We bumped into Jane and Andy on the way, the first time we have seen them since last February!. We compared notes on the devastation!. Billboards toppled, road-signs bent or flattened, more trees or branches down …not a pretty sight

The “river” is wide but is really just a trickle normally. It’s wide (despite it just being a trickle)….and maybe 15 feet below the bridges….maybe more. Now they were mud brown almost at the same height as the bridges … and flowing very fast with branches and all sorts being carried down. Much higher and more bridges would have been closed….and possible damaged….and the estimate was the rivers would rise further as the mountains released their rainfall. Luckily that didn’t happen as luckily the heavy forecast rain landed further north and inland.

The river did burst its banks in a few places and some people were evacuated, but not as bad as it might have been.

We carried onto the Port waterfront which is lined with bars and restaurants. Even more carnage. These took the full brunt of the sea. Promenade covered in shingle and crap, doors and windows smashed in, buildings full of shingle and the Art Centre smashed on the ground floor. All the plate-glass windows gone ….in fact, most of it around the back of the buildings!

We went onto the harbour. It didn’t look too bad at first. The fishing fleet looked safe as it was protected by, and far from the sea-wall. We could hear and see some yachts at the yacht club had their sails ripped. As we walked towards the mooring immediately behind the seawall we saw a lot more damage. Masts broken off, sails ripped, railings bent and mangled, windows and hatches broken and missing and at least 3 boats sunk. A lot of the gangways were sunk, smashed or sinking.

The posh Cala Bandida on the inner harbour wall had a downstairs bar, a middle lounge and a rooftop terrace. Only the middle level survived.

Later we saw the videos of the sea easily breaching the top of the seawall and crashing down on top of the boats. They had no chance…

Snow was forecast and that did arrive on the higher ground….20cm or more. Roads were closed and cut-off. It was a corker of a storm.

So how bad was it? … Pretty bad. Gusts in Javea were recorded at 135 Kmh. The Storm was Gale Force 9. The waves were the highest recorded in the Mediterranean between 7 meters 13.5 meter (44 feet high !) A number of lives were lost.

The scale of the damage was a shock…and we had more to witness tomorrow. The sea apparently rearing up in front of you was awe-inspiring. It looked like a brown wall, rather than sea.

After a wander around in the sun, we got totally drenched on the way back despite being in full waterproofs!

The shore road was still closed but it had been cleared of the worst of the debris and shingle. That was in piles along the side of the road which was to be re-distributed along the beach and re-spread.

The sea was still a solid wall of waves and the tide-line really high….just not as bad as yesterday.

Strangely whilst the Port, Port restaurants and La Siesta close to us were smashed by the storm, the equally exposed shoreline closer to L’Arenal wasn’t nearly so badly effected by shingle on the road etc. The only noticeable difference to the geography was a 6 to 10 feet verticle bank/cliff rather than a shallow sloping beach. That must have been enough to stop the brunt of the waves pushing forward.

Sand from the beach at L’Arenal had been piled up by diggers into a barricade and much bigger and deeper at the far side. Apparently it lasted for about 10 hours before it was breached……

The line of smart bars and restaurants which are busy even in winter were pummelled too. Windows smashed, sand covering the tiled-prom up to a few inches deep. Seaweed, plastic ….and dead fish and other sea-life spread across the beach.

The wall on the far side was undermined and shunted sideways. Huge marble blocks which acted as a low wall were strewn around like lego. The kids climbing frames etc were in bits. Even iron railings were ripped apart like a tin can.

The clean-up was in full swing but would take a while.

We drove along to Cala Blanca which we heard was bad. but to be honest it didn’t seem that bad. Maybe just the clean-up had been very good!

The Port restaurants were still out of bounds. We had a closer look at the marina as the sea wasn’t breaking over the sea-wall as much today!

The poor boats had a hard time. The damage caused by the enormous waves breaking over the sea-wall

We did our tour of the crime scene. The sea was a bit more quiet but still angry.

Every cloud has a silver lining. The keen surfers were out riding the surf. Getting into the water was a challenge involving waiting for a wave then launching themselves from the rocks onto their board and paddling like billy-oh! I have no idea how they got back in safely!

We did another tour The sea was much more like it’s old self today. Sand was being re-distributed round the beach and tidied up. Shingle shunted along the beach by lorries and spread.

We managed to get look into one of the flooded garages. There were a number of cars which had been submerged over their roofs

The Cantina which was attached to the Fish-market was open today for the first time. We sat outside in the sun for mussels and calamari….they were fresh !.

At least some of the fishing boats don’t head out early. They seem to arrive back around 16:00. There are small hand-hauled fishing net boats and some small trawlers which will trawl the sea-bed.

As we tucked into our lunch there seemed to be a lot of fish in the nets from the small boats and a lot of excitement. I had a look. The net in the bottom of the boat was full and fish were being extracted from the net on the quayside in handfuls.

It was also the first time we saw fish being sold to the public. Just a question of timing I guess!

We later discovered the cages at the fish farms had been damaged in the storm. The fishermen were catching all the Bream and Bass etc which “escaped”! It was good news for the fisherman….but the sheer volume of fish caused the prices per Kg to plummet! Supply & demand!

The next few days we “patrolled” and watched the progress. The council and Business have done so much, so quickly but they have still so much to do. We started our jogging on the beach now our knees are both OK. Just being careful and testing them now.

We went a short distance down the coast to Moraira to see what damage had been done there. Now they will probably have been clearing up there too but damage looked minimal (maybe a plank on a park bench or two).

The geography and angle of this part of the coast meant a big headland protected this bay and harbour. They were lucky.

Somewhat ironically the bridge over the river Gorgos ner the pot has been closed to traffic this year as it was damaged by floods in 2007 and must have been damaged too much for traffic in recent floods.

Work starts to remove and replace it tomorrow at the cost of nearly 500,000 Euros

I think that’s the end of the storm update, if not the clear-up