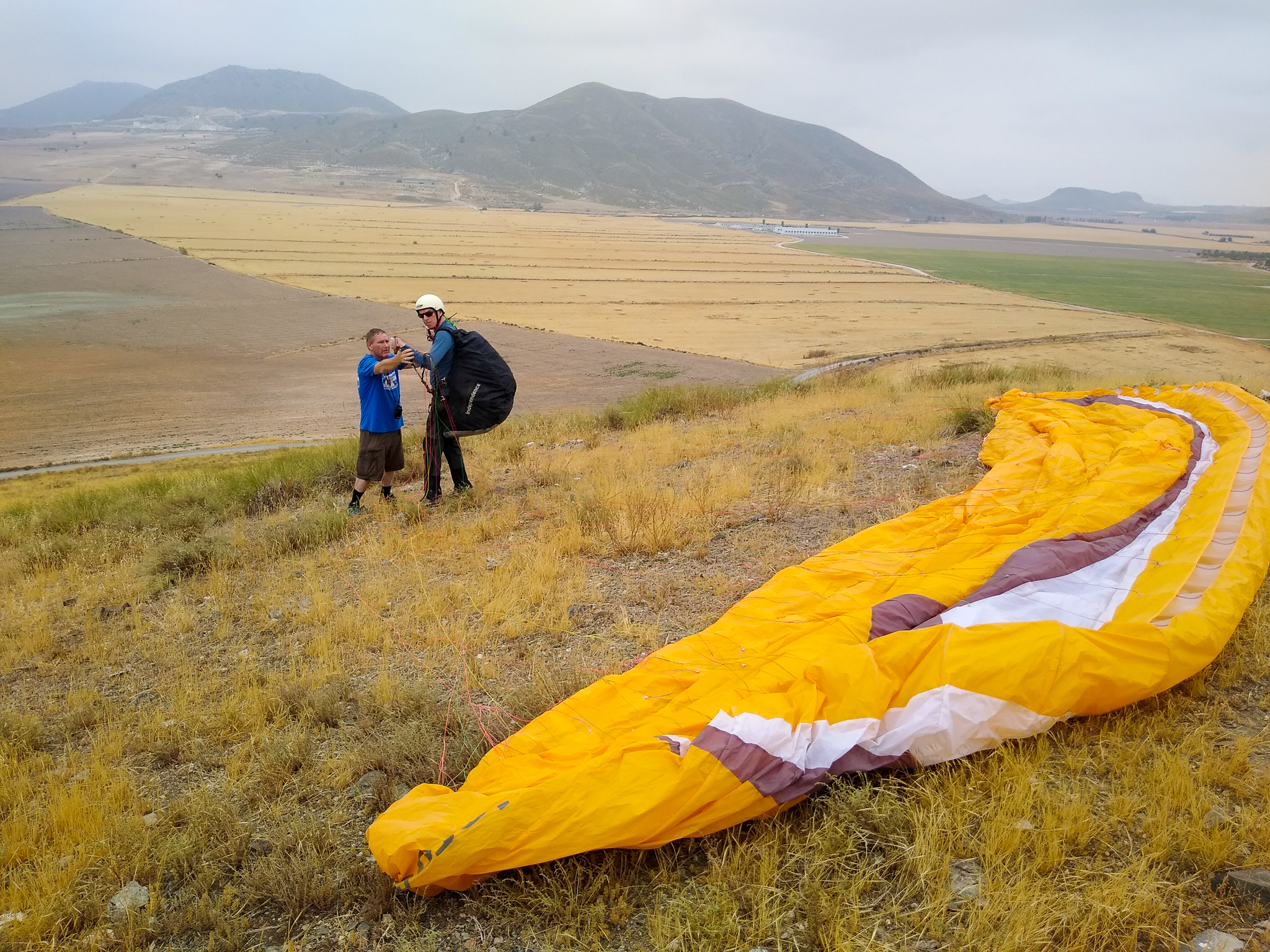 The day I came unstuck!

We made an even earlier start meeting at 06:45 rather than 08:00 as the afternoons have been too gusty (the heat causing thermal bursts).

Unbelievably it was a bit misty with a slight bit of drizzle and no wind!

We drove back to “the lump”. It wasn’t raining but still misty and not much breeze. The canopies were checked and taped to repair the punishment we had handed out to them.

There was enough breeze for a forward launch… at times. Ken went first and made a long flight on his second attempt, then Marius then Tony, then me.

My first attempt felt good. Straight launch, canopy OK, on the brakes as instructed….. then I did what many of us did and we knew not to do…. and I have seen lots of passengers on Babadağ do it so no excuses …. I stopped running too early. Bugger I was so annoyed with myself. Landing on your arse on a hillside covered in big sharp pointy rocks and hillocks of grass is going to hurt. Note to self. Wear gloves next time!

Attempt two was going well, straight launch, off the A’s and onto the brakes as instructed… and kept running and running… and running.. (or so it felt). Eventually, I tripped over a huge grassy hillock. On my arse again. As there was so little breeze, certainly for me, generating enough speed on the rough terrain was hard.

3rd attempt. This didn’t go quite as well. The canopy started dragging me left until I toppled for the 3rd time. This was getting annoyingly repetitive!

Simon came down to give me a hand. We were chatting having a de-brief about what went wrong. I saw I had a tear in my trousers and saw some blood. I had a look at the graze….. Holy Shit!. About a 3″ triangle of skin was peeled back and I could see the muscle underneath!. “Err Simon… I have a problem. A Hospital problem!” ). These big sharp pointy rocks showed their fangs!

Fortunately, the bleeding wasn’t too bad. We packed up and headed to the medical centre in the nearby village. They looked a bit unsure at first, but very soon after Mario took me into a medical room, cleaned it up and stitched it temporarily. The staff there were great and Mario in particular.

He left a drain in the wound and said I should go to the hospital to have it checked properly. He gave me a tetanus jag and said I would need antibiotics.

The leg wasn’t painful… apart from the iodine. Let’s see how that turns out!

I’ve spared everyone the gory photos. If you are interested in seeing them let me know. ?

We all headed back to “the lump” so the guys could do more flights. The got on great. I was very envious?. I was also feeling guilty for having wasted their flying time.

I sat down by the van. Luigi made me a fan for the flys out of dried grass. The flies LOVED the dry blood on my trousers and boot! Plastic bags made good gloves to keep the flies off the grazes!

Flying stopped about 14:30 as thermal gusts were too strong.

Heading to Cartagena Hospital as I type to see what they say.