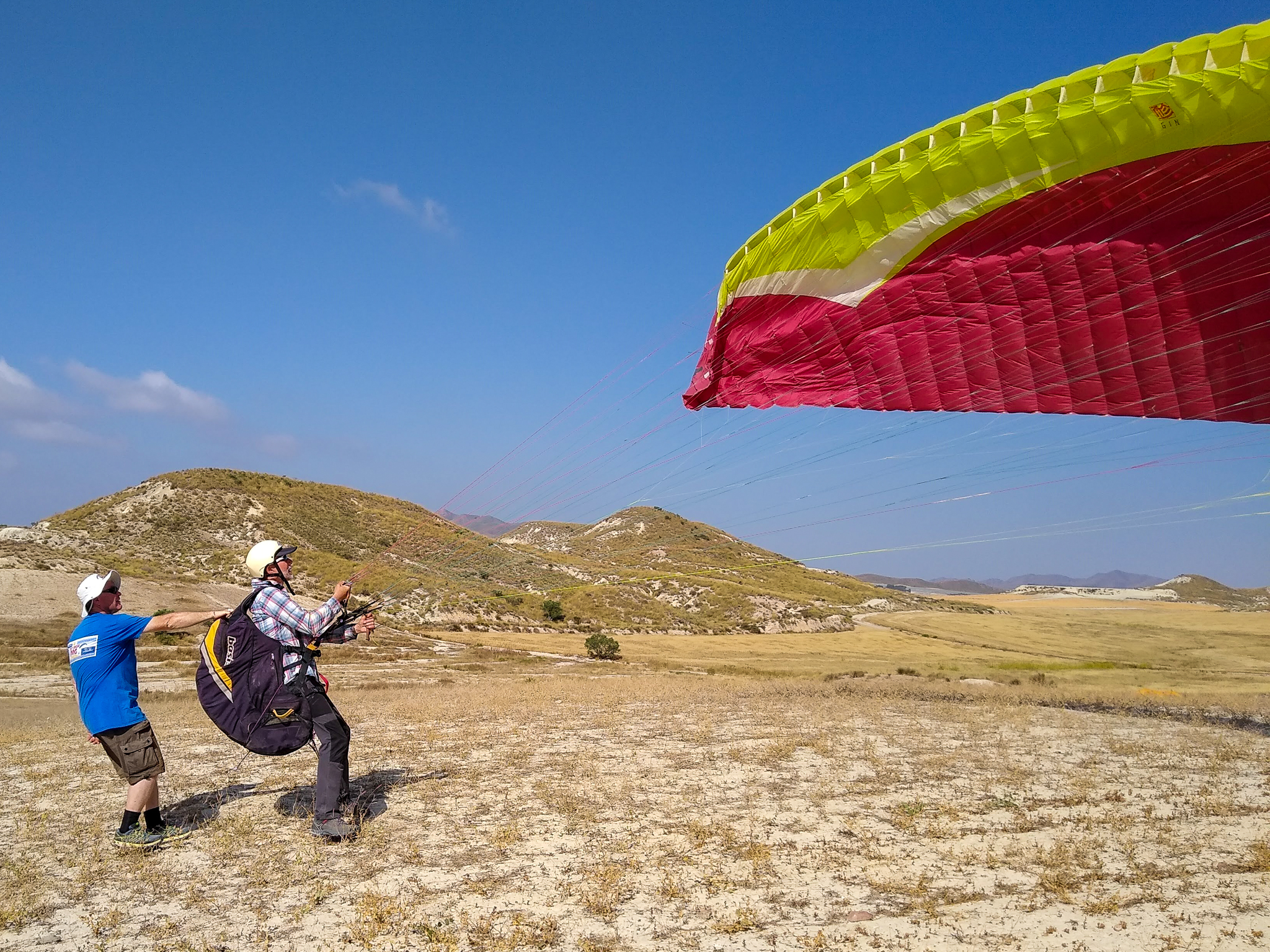 It started to feel a bit more “real” today.

After two days of limited practice controlling the canopy on the ground due to the conditions, and really not getting the feel for it at all (i.e the canopy was controlling me not vice versa!), Simon took us to a slope where we had to reverse launch, turn, run down the hill, flare (brake), turn and collapse (collapse the canopy not a collapse of the pilot ?)

We might not actually take-off but the whole process is the same as taking off. In fact, we did take off…. a bit…. so it was our first flight.

Simon started with Luigi who was pretty good at ground handling and looks like a natural. He flew!

Ken was next and did a great job on his first flight.

My turn next! I must admit to being apprehensive. Not about the low flight I might do, just not feeling comfortable with the whole process of lifting the canopy, getting it over your head and under control, then releasing the control lines (other than the brake), …. all this when trying to walk backwards, turning then running forward. A lot to think about!

With help from Simon, the first “flight” went unexpectedly well!. I then ended up on my arse a few times but the key thing was trying to understand why….. and how not to do it again!

We were sharing 2 gliders and swapping. I had another handful of flights and some went quite well!

We ended up at “the lump”. A small hill. We’ll it looked small enough from the bottom until we carried the canopy and harness up to the top. Looking down to the landing site it seemed much higher!

The wind was getting a bit “brisk”. Luigi our top trainee was selected to go first. A gust caught the canopy on the 1st attempt. On the 2nd attempt, he was lifted off his feet before take-off and had to “turn” in mid-air. He did a great job but that all resulted in him flying sideways rather than forward. He flew closer and closer to the pig farm and also got a couple of thermals which added to the distance. He stopped safely before the “shit pit”!

I think we were all a bit shocked, but also very impressed with how Luigi coped. I had video of the flight which was handy to analyse what happened. Unfortunately, the file size is too big to post here ?

We decided to head to the local village for a coffee and hope the wind died down. It was a great wee roadside restaurant. These places don’t like much from the outside but the food looks good!

Unfortunately, it didn’t die down so instead, we went to the hill they would use for the next course. This is CP (Club Pilot). On completion of that, you are authorised to fly solo without instruction. The hill was a lot higher and the training is more advanced. Lots of good chats and info exchanges on paragliding.

We headed back for a beer at the hotel after a Lidl shop for tomorrow’s lunch. We had a really nice meal at Nueve Bodegita ready for an even earlier start tomorrow to try and get the lightest winds!