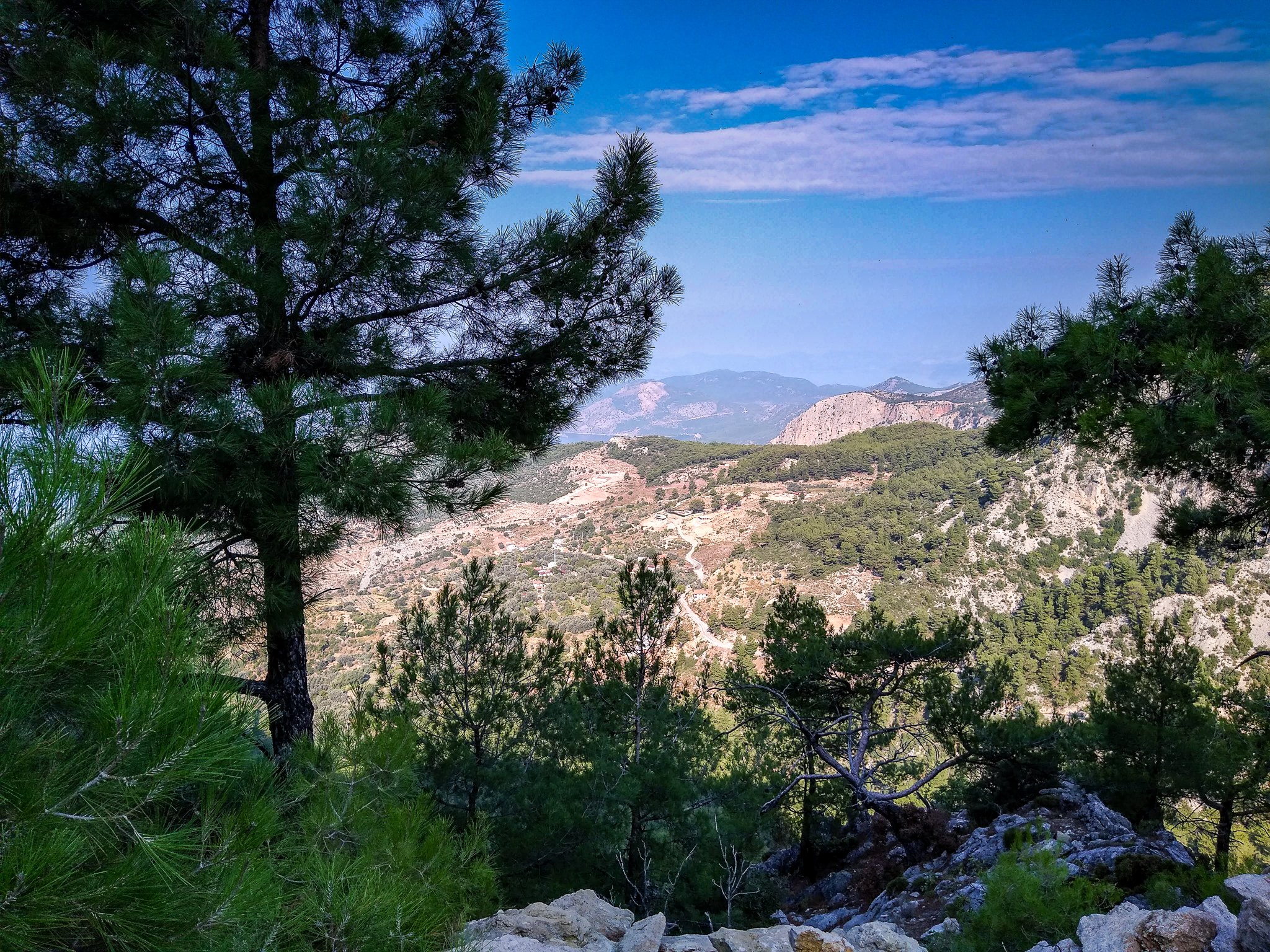 ROTA (Return of the Aberdonians)! – Part 2

Ramblers day 🙂 . Carol and Neil were up for it so preparations were made for the picnic.

Unfortunately, the forecast was rain and we were heading for the hills at Üzümlu.

It was dry as the walk started with the odd droplet falling from the sky. We hadn’t gotten too far when it became heavy enough for jackets to be donned.

We’ll everyone apart from Neil who didn’t want to be “any bother” and didn’t tell us he didn’t have waterproofs. We have spares of everything including jackets and ponchos etc…..eejit!

It was wet enough to need a jacket….. if you had one…. but fortunately not torrential and not too cold. Still, the idea of walking in a wet cotton t-shirt is not my idea of fun!

This one was different terrain. The views would have been spectacular over to Fethiye and the Bay, and it was a rare view all the way across to Ovacik which is tucked away in a dip in a plateau.

The views, the temperature and the “soft” drizzle could have been the West Coast of Scotland!…. in summer, not the middle of October!

We had a lovely meal that evening at the Yengec. A fab way to end a damp day… but far from a washout day.

Carol wanted to do a wee road-trip. We didn’t plan anything in advance due to flight hassles post Thomas Cook, and we didn’t know how much or little they wanted to do.

We decided to head to Kas which is very pretty and on the coast road to Antalya. Carol and Neil are flying back from Antalya.

After the damp Wednesday, we had a fine Thursday.

We went over the mountain via Kirme. The views are stunning.

Out if the blue Neil asked if we had squirrels here (as we drove through the forest). “Yes” we said, but we don’t see them often, and we have never seen them here.

As we reached the rocky clearing near Blacktree Farm, Neil spotted something in a pile of rocks. Now Neil claims to have bad eyesight. With this “spot”…. and several others over our Road-trip… I hae ma doots! (I have my doubts for you sassenachs 😉 )

What turned out to be a squirrel popped its head up from the rocks again. We spotted another… and another. There were are least three but could have been more.

They were having a great time diving in and out of the rocks and keeping “meercat” lookout form the top of the rocks, with the odd scamper across open ground. They looked perfectly at home out of the trees.

We dragged ourselves away as they had been fun to watch. We dropped down to the D400 and diverted in Patara. We visited the 17km of powder-soft sand, undeveloped beach. It is also where turtles nest. It will be a tragedy if and when money overpowers conservation and they start building.

We had a brief look at the ancient Lycian Patara city from the distance. We didn’t have time to give it a proper explore.

We arrived in and Kas. The apartment block looked nice and it wasn’t too far from town. The parking was easy. Our top floor rooms had spectacular views over the harbour bay and over the Marina bay, with Meis poling its head over the hill in the centre.

It had only been open 3 months and the rooms were fab..all for £24 per night per room, including a very good breakfast!

We walked down to the town and booked our ferry tickets to the Greek Island of Meis the next day. I had the bright idea of exploring the peninsula which we had never been to before.

Carol and I explored the Lycian Theatre. Aileen and Neil found some reason not to walk to the top of the Theatre ?. We continued walking…..and I started to realise how big the peninsula was!

We passed the turn-back to Kas and the marina but pressed on. It was hilly… we got to the narrow bit which only just makes it a peninsula rather than an island. We stopped for water at the beach bar. It was a pretty spot with crystal clear water.

We pressed on with the view to getting a Dolmus back. There were some big Villas and almost Amalphi like groups of houses in clumps round the coast. Very pretty and but too far from the town to walk it regularly.

We pressed on up another steep hill. Neil’s back started giving him gyp at this stage. I had a look at Google Maps and it was still another 45 minutes to get to the end of the peninsula!..and the sun was dropping.

I wanted to complete the circuit of the peninsula so I carried on walking and the others got a Dolmus back. They l waved as they passed me taking a sunset photo!

I had about 1:10 worth of walking to do and the sun was almost gone. For some reason, the return didn’t seem as long as getting there.

I passed the locals setting up a market for the next day as I neared the apartment. One to explore tomorrow.

We rounded off the full day with a great meal at the Corner Cafe.