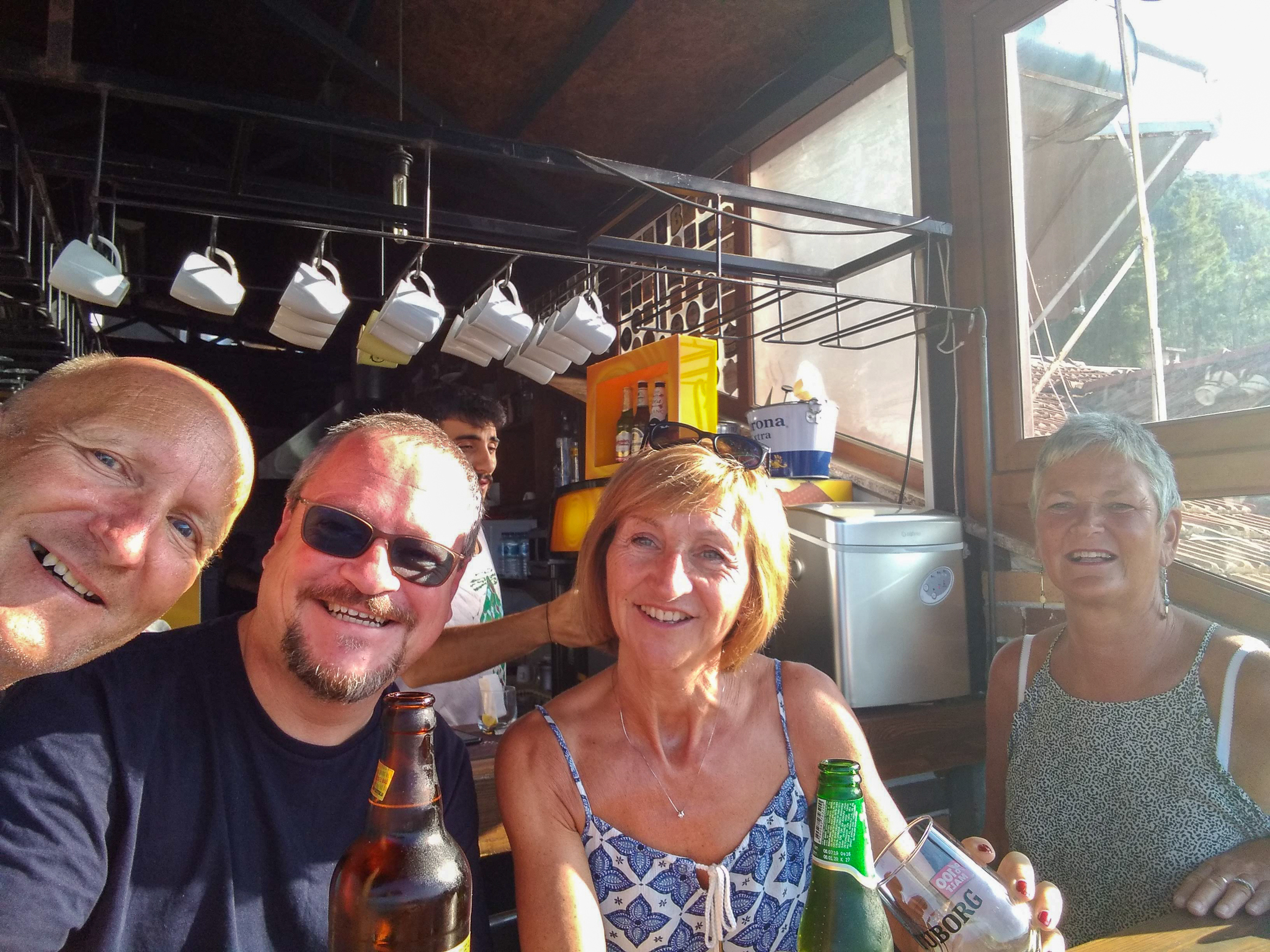 This is a week(ish) “diary” rather than “Blog” to keep track for ourselves.

Carol and Neil are staying for a week, arriving via Bodrum (long story), and departing from Antalya (another, long story), so road-trips are involved! 🙂

Oludeniz Hash Kayakoy. We started at the Dolmus turning point, then wandered around back lanes via Izela until we returned.   About 5 Km and thankfully undramatic. There we lots of barky dogs.      Some doing the token-gesture waggy tail barking…and a few going mental!  We all survived.   Roka had cancelled our lunch booking at the last minute so Paul booked Badem in Ovacik……it was a bit “meh”

We were picking up Carol and Neil at the Bus Station around 16:00 as they were travelling down from Bodrum by bus.   It was all a bit vague as we didn’t know what time their bus was due in, but they thought they would be there before 16:00.    No sign of them at the meeting point at 16:00!   We hovered, then decided to head back into the station to find out when the bus arrived.    As we arrived at the station we saw them getting off a bus and heading the wrong way.   We caught them!

Carol had been at a Yoga Retreat in Bodrum for a week.  Neil had flown to Bodrum the previous night.   It was all a hassle because of the Thomas Cook liquidation meaning they had to re-book (and at a lot more expense).

The journey was long and traumatic….. especially when Carol left her bag with passports etc on the bus when they changed at Mugla!  I think this is where Karma came to play as they had handed round chocolate on the bus and had helped an old lady.     When they realised the passports etc were still on the bus, a girl helped them, but the bus driver had spotted the bag and drove back to return it to them…..quite a while after they had got off the bus! What friendly helpful people.

We headed to El Camino for great views and a beer to help de-stress.     Carol also wanted unhealthy grub after a week of vegetarian Yoga Retreat ?

That night we had Thia food at Sandinos   Tres good ?

Carol and Neil came along with us to Yoga at Barracuda.   Neil was a Virgin Yogi and did fine ?   The rest of the troops hit the Monday Market at Hisaronu and did a bit of shopping after Yoga.

Next stop was Paddle-boarding at Paradise Beach.    Carol got on great again and Neil did well too.  The weather was perfect and we had a great afternoon there.

Dinner was down at Yildrim Guest House in Fethiye via a return visit to El Camino to take-in the nighttime views.

Yildrim Guest House is interesting. It’s a kinda back-packers hostel owned by an ex-Tour Guide from Cappadoccia and his Korean wife. It has maybe 6 tables and does simple Korean / Asian food at low costs. Omar has great English and is well travelled and fascinating. We have never met his wife!

We tried to go the other week but they were away hiking in Marmaris (them being away when we want to visit is a common thread!) They will travel outside Turkey for a lot of the winter.

His wife was away leading a Christian tour of Turkey for Koreans at the mo!. Turkey has deep Christian roots and history dating back to biblical times as it is close to the Middle East and on the “Silk Road”. Korea (apparently) has many Catholics ….Hey Presto a niche travel business!

Carol adopted a tiny black kitten before the eats started. It looked cute but the teeth and claws were ever-present!. I am not a “cat person”!. I got clawed on my leg for no apparent reason. It was itchy as heck!

We have eaten there a couple of times before and enjoyed the simplicity. The starters were great (veggie spring roll and a type of omelette). Carol did well on the main with her chicken curry but the Bulgogi was a bit chewy. We would go back….we just wouldn’t order the Bulgogi!

Omar didn’t have wine but he went next door to the shop and bought a Litre of Dikman (wine) for us. He just charged us what he paid for it.

We wandered past the trendy bars in the old town (the Paspatur) but stopped at the far side at a quiet bar. We had a drink downstairs….only to be rudely interrupted by “yachty types” who sat at the next perch and droned on over inane nonsense. It’s not a “yachty” thing, but some people seem to want to talk piffle about nothing just to be heard. They seem to enjoy the sound of their own voice rather than the content ….

They had a sniggering, smart-arse, in-joke exchange with the waiter who brought the clown-prince the “wrong size” of Baily’s Cofee. The lead (English) protagonist was preened and coiffured with flowing locks and overly tight shorts….he really loved himself. The type who go abroad for a “warm England”…and want everything to be “just like home”……

Now, this was a hectic day …which turned out great 🙂

It was the start of the 20th Olu Deniz Air Games. Paragliding “Acro” pilots come from all over the wold, wing-suit nut-jobs, base-jumpers from paragliders, para-motors, mosquitos, free-fall parachutists, speed-wing flyers, etc etc. It is hectic!

Carol and Neil went shopping and we were to meet them in Abrakebabra at 11:30 and walk down to Olu. We were just about to leave the Villa when a message can in that our new Kayaks had arrived (Did I mention we bought new Kayaks ? 😉 )

Time was tight but we decided to pick up the Kayaks first as we were going away on Thursday for 4 nights and other things scheduled before then. Using a foam strap–on roof-rack at the front of the roof and two yoga-mats strapped onto the back we loaded two 22Kg kayaks onto the roof and headed back to the Villa.

That was fine….until we were stopped at the Jandarma checkpoint (just routine, not the kayaks on the roof!), but waved through!. It meant we were 20 minutes late to meet Carol and Neil …who were milling about looking a bit discombobulated!

We set them on their way to Oludeniz by Dolmus and we went back to offload the Kayaks, see if our camping supplies had been delivered by Decathlon (another story!), then Dolmus it down to meet C&N later.

The camping stuff had been delivered, we had our Kayaks….what could go wrong?

After unloading the gear I went to move the car off the “road” which I was blocking, …..only for the button to disappear inside the handbrake with the handbrake jammed on hard! Shit!.

I called the car-hire company who arrived 20 minutes later to take the car away and return it later that day…..phew!

We waited for a Dolmus but it sailed past full, so we got a taxi. A well-spent £4!

We went for our prescribed Lamb Döner in Pita (homemade) at Bela Gusto. Still, a must-do lunch stop for us at Olu.

We all kinda split after that. Aileen’s hooves and nails and hair done, Carol and Neil chilling and shopping. Me watching the Air Games and generally mooching!

I “know” Lorena from Brazil, via Facebook and Instagram as she Paddleboards and is a friend of Eglė but I have never met her. I thought it was her, but I wasn’t sure… as she didn’t have sunglasses on like on Instagram!. She is tall, so toned and blond so not hard to miss! I eventually wandered across to say Hi. She had recognised me too…. Nice to say hi in the flesh ?

We all hooked up and decided to stay in Olu for the evening, so headed to the rooftop Tilki Bar for refreshments. It was a great place to watch the Air Games and the sun go down. Some impressive flying from Wingsuit Flyers and Speed-wing pilots. The guy flying the 2 metre (ish) long, remote control plane was good! Amazing stunts and control. It wouldn’t be allowed so close to the crowd in the UK!

We headed off to Kumsal Pide for a simple meal but got sidetracked by a tethered hot-air balloon being inflated. They certainly had a lot going on for the games!