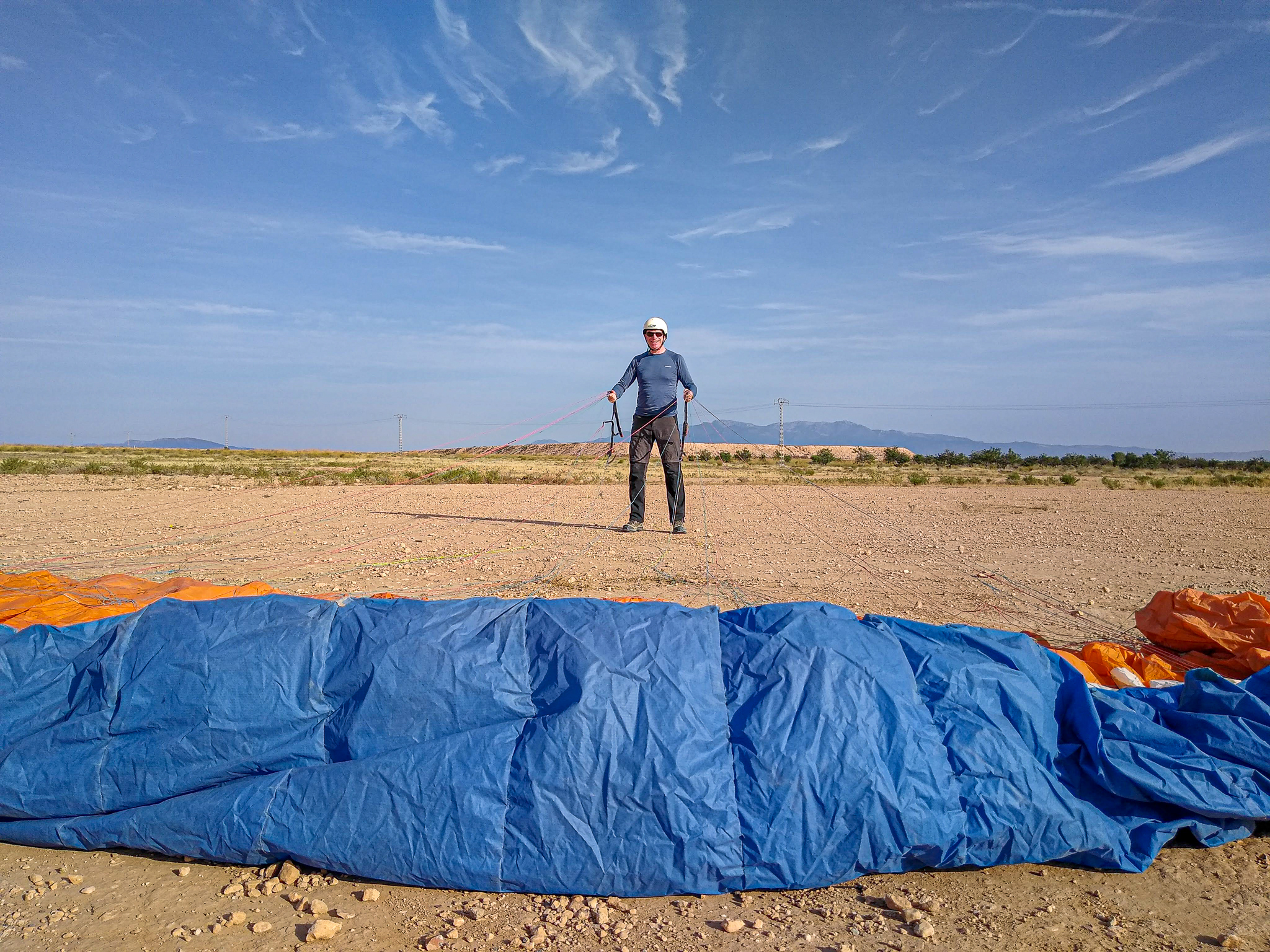 Yes it is so soon after Turkey. 4 days in fact!.

When I first did a tandem paraglide many years ago I remember my first thought was “wow this is amazing”. Almost immediately my second thought was…. “it must be great to fly one of these!”

Time passed and I didn’t do anything about it. Well I did talk to people about it and the consensus was it was hard to learn in the UK because of the weather, I didn’t follow it through.

The clock inched (flew!) forward and I decided to think seriously about it again. I was recommended to learn with a British school in France or Spain. Again though, fitting it around other plans made it tricky .. and I clearly wasn’t committed enough or I would have changed “other plans”!.

Just before flying out to Turkey in April, Sky High PPG in Mazarron, Spain, advertised availability which fitted in with our dates coming back from Turkey. Bosh. Booking made with little time for thought,

Simon our instructor has been flying for a long time. There are only 5 on the course (their maximum number). The 08:00 day 1 started with a DIY breakfast in their townhouse in Mazarron, a bit of paperwork and signing disclaimers, then onto the first training site via Lidl to buy water and lunch. At the checkout, I realised the bottle of water I picked up was cloudy. On close inspection, I realised it was “Diarrhea water”! Actually, it was probably a good call to replace all the salts etc we were going to lose in the sun!

First up was “ground handling”. Basically flying the canopy from the ground so you are competent enough to strap it to yourself then prepare for take-off. An essential skill and one you can’t side-step.

It was hot with a baked mud surface covered by stone and low growing scrub.

We watched Simon to see how it was done. The conditions were so tricky (strongish gusty wind), even he struggled a bit. Shit that doesn’t bode well!

It was then our turn to struggle!. Nobody said it was easy so no big surprises there ?.

I am pretty sure I was the worst of the 5 of us which is a bit depressing. These canopies have a lot of power with even a little breeze. The strong gusts were dragging us and lifting us as we fought to control the canopy and manage the direction of it over our heads. The wind swinging wildly as well as gusting.

We tried again after lunch and went down a canopy size to compensate for the tricky conditions. I’d like to say it helped… and it did for some… but not me.

We drank water….. a lot…. and we realised we should have brought more but luckily Simon had extra.

We spent time being shown hot to clip into a harness and sit into it when flying and how to extract yourself before landing. Some theory on flying and landing at our novice level…. then a lesson… and 5 practicals on how to re-pack a canopy!

We waited for the wind to drop but no joy so we abandoned about 17:30.

It had been a long day and surprisingly tiring.

We met Aileen & Mo at Ken & Mo’s Hotel which was close to where we were staying. I had a lovely cold beer and caught up with the stories from the girls. Crocheting and sitting by the pool sounded great!.

We had a good meal on the waterfront. Again typical Spanish of being quiet at 20:30 but mobbed at 22:30 (including families and babies etc.)

One thought on “Paraglider training in Spain – Day 1. This is hard!”