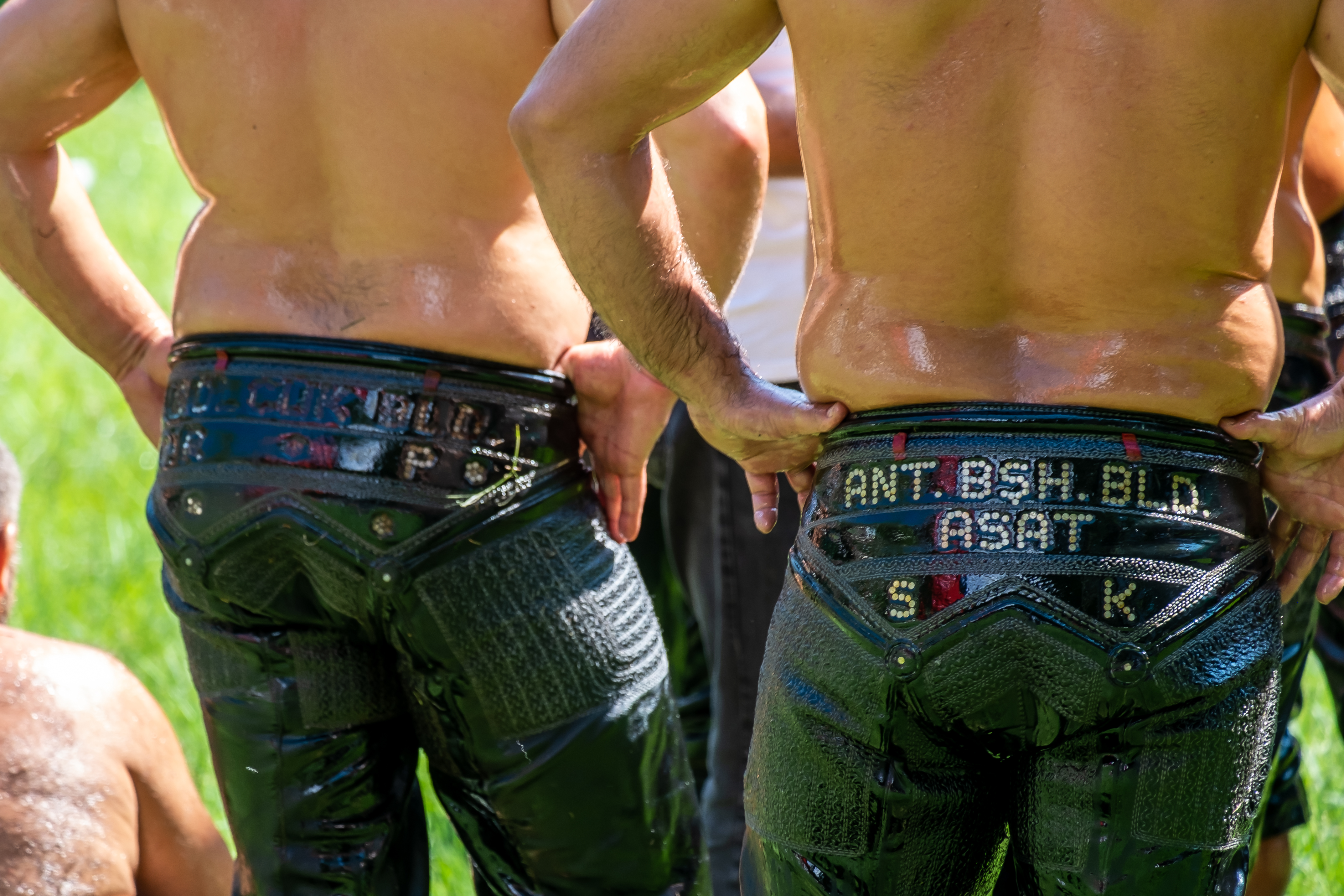 Oil Wrestling (Yağlı güreş in Turkish) is a very old sport, going back to Greco-Roman times and one of the oldest continually running sporting events in the world!

There have been 658  Yağlı güreş events in Erdine which happen once per year… Do the maths!… OK it has been going since 1362!

We have never been to see it and always wanted to, so back up the road to Köyceğiz on Saturday having just been there a few days ago.

It was only 90 minutes or so away on a good, scenic road. We went over the mountain at Gocek for a change rather than use the tunnel. Its a good wide road too with good views in both directions. It was quite busy so lots of locals must use it to avoid the 7Tl tunnel toll charge (about £1).

We arrived in Köyceğiz having no idea where the wrestling was, and drove down the main drag hoping to see something….nada!. We turned along the lakeside knowing there was a park there….. nada!

Aileen asked the Zabıta (a kinda Council Policeman who issues fines for shops and businesses breaking rules etc etc.). He pointed vaguely away from us towards Muğla (the capital of this area)……

I started looking at Google Maps to find the Muğla road, by which time he had another think and motioned us to follow him!

It was great having our own Police escort! It was a fair distance away through a tortuous route. It might have been a challenge finding it on our own!

There was a car park on our right which we went to turn into, but he went into the one on the left. We followed. We think that was the car park for Officials, competitors and dignitaries. They let us in!

It was a free event set in a grassy area surrounded by stands. Trees surrounded the grassy area and a small river ran alongside. I imagine on other days it’s a shady picnic area for the locals.

We passed through assorted food stalls and watched a bit of the event which was in full swing.

Now part of the problem is we didn’t know the rules or the customs so it was a bit of a mystery.

From what we gather, there is a fair bit of custom and tradition and showing respect to the audience and their opponents.

It is a male only event. They wear knee-high right  leather trousers made out of buffallow or calf skin, and everything is doused in oil. The trousers are called Kispet.

The wrestlers are called Pehlivan from the Persian pehlevān that means “hero” or “champion”.

The competitors all enter the ring and are introduced, along with their town and their achievements. Some time after that they march around towards the audience swinging their arms and slapping their thighs.

At some point they kneel and touch and kiss the grass.

Shortly  after they wander around embracing other competitors, but we think that is a symbolic mark of respect to anoint each others backs with oil.

The final preparation is to cover themselves in even more oil, then constantly wipe oil and sweat out of their eyes with paper napkins the referees carry!

The wrestlers all wrestle (one to one) at the same time. There is an umpire for each match so there are a lot of people in the big grassy circle at the same time. The referee blows the whistle if they are getting close to the perimeter of the ring, or if there is foul play (neck hold etc).

Putting your hand inside your opponents leather trousers (Kispet) is allowed…. and encouraged!

A winning move seems to be turning your opponent so their belly-button is skyward….. or gripping the Kispet (leather trousers) a certain way?

The match ends for any pair which concludes like this, while the other wrestle on untill they have a match-ending move or they  run out of time (we think 30 – 40 minutes)

Throughout all of this, and drums are thumped and a flute-type thing is played in sporadic bursts!

We went for some food under the shade of the trees. Köfte (meat balls), corn on the cob, stews, kokoreç (chopped intestines!) etc.

We picked a place with tables and chairs and went for Köfte. It was really good served in bread along with a Fanta (no alcohol here).

It was fab for people watching. There weren’t many tourists here. A young lad at the next table was interested in us. They wrestle from a young age, as wrestlers have to train the next generation to keep the tradition going. He motioned that he was a wrestler (we guessed as he had green leather pants (Kispet)). He motioned that I should take his picture which I did and showed him and his family. It was lovely to see the pride in the tradition.

Other young lads were carrying bits of cardboard with them. This was to stop making a mess of the seats and stools they sat on at the cafe. Other didn’t bother and left  oily pools on the garden chairs.

We saw our friendly Zabıta officer again with two council “jobs-worths” with clipboard. They were fining the stall-holders for some indiscretion or other.

Past champions were cheered and I came across an elderly gent in traditional costume who did a parade of the ring. He seemed happy to have his photo taken, but a bit uninterested and truculent when I showd him the results. Maybe he was used to better photographers!

We watched some more wrestling then made our way to the exit before the end.

That’s when we saw the gift-wrapped sheep being led in! We were curious but the locals werent in the slightest! We have no idea if it was a prize or a sacrifice!

We manged to squeeze out of the compact car parking space under the trees and made our way back.

It was a realy intersting day out and we would go and see it again as the local colour was fascinating.

Click on the pics to open a gallery with titles. Apologies the images are in tbe wrong order. I won’t be able to fix that one we get back to the Villa and onto my laptop.