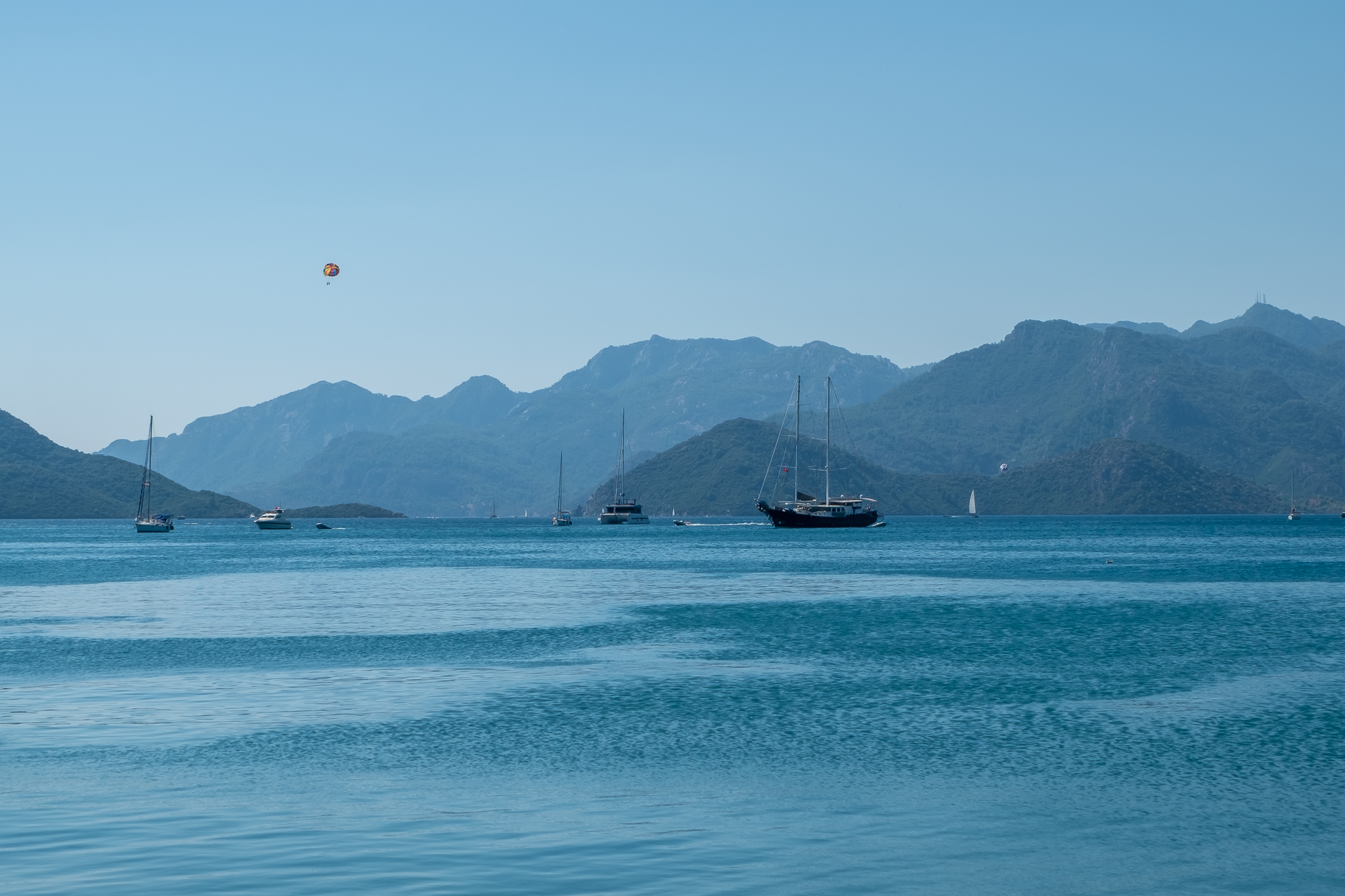 We decided to head for Marmaris today then take it from there. We had been once before, but only to get on a Gulet and get off it, and round the outskirts on our way to Datca & Bozbrun. It seemed perfectly pleasant from our last visit !

It’s only about a 30 minute drive over a lovely wide road (mostly dual carriageway), snaking over the hill then back down again.

Our visit coincided with The Rally of Turkey 2019 which was centred round Marmaris. We saw signs for it and a couple of cars, but it didn’t hamper us.

We parked close to the waterfront and waked in a couple of hundred yards. The main street was wide and tree-lined and well-kept. There were fountains and waterfalls and a “canal” with a row of fish spouting water from their mouths. Nothing “Blackpool” about Marmaris at all!

The Bay look magnificent as you drop down into Marmaris from the high-ground, and the waterfront is smart. A natural harbour surrounded by hills and mountains. We had a Fanta and a toastie to tide us over. It was all friendly and zero hassle,

Now, we have only see daytime Marmaris and that seems lovely. Guess we need to come back some evening to give it a full test!

Lots of people go to Icmeler but we have never been. The Taxi boat was heading there over the bay so we jumped on. 20 Tl per person one way (about £3 for the 40 ish minute journey). I must admit it was further then we thought and it took longer than we thought.

From the new angle, we saw a cruise ship was in, and a marina in the distance identified by a clump of masts. The bay was lined by big hotels and the beach lined with sunbeds. Some hotels looked very smart especially as you approached Icmeler and one had some fancy yachts moored up, The bay was crisscrossed by jet-skis, bananas, “flying mattresses” etc ….and the odd proper yacht or gullet.

Icmeler looked very well cared for too. Big hotels along the front (many of them all-inclusive we were told). but again lots of trees and flowers and a very pretty canal with bridges to allow small boats to pass under. We had a drink in the bar of a very smart block of apartments. We can see how Icmeler is a good call for many.

We did see the WRC camera helicopters buzzing about and as we were leaving we realised the last WRC stage was right behind Icmeler. We saw the dust and briefly heard a car, but despite the close distance, the loud rally cars were barely audible.

We got the water taxi back and hummed and hawed what to do next. Too early to go back to Akyaka and too late to go to Selemiye. We decided to drive to where the rally HQ was……I should have realised it was almost at Icmeler !. So good we have been there twice!

It looked like it was Official Passes only for the Rally HQ, so we kept on going to Turunc which was over another headland. A wide, well-surfaced twisty-turny road with fabulous views back to Marmaris & Icmeler in one direction, and Turunc as you drop down from a great height from the other.

We had high-hopes of Turunc as it looked like a lovely bay surrounded by mountains. As we walked in towards the harbour it was like we had returned to Hisaronu!. Not what we expected!. A large busy British-styled bar on the corner with loud music and shops selling “genuine fake” shirts and bags and all the tat of the day. We were a bit crestfallen.

We walked to the east of the waterfront which had nothing to grab us either other than the scenery.

The main walkway above the beach was a lot better. Looked like some nice bars and restaurants and accommodation, but it was a narrow walk-way and the beach was rammed with sun-beds. It felt a bit claustrophobic …and didn’t need to be. If we had approached Turunc from the opposite side it may have made a totally different impression.

I grabbed a pic as we left Turunc. What we have seen of the Aegean Coast, it is very “western” in clothing and attitudes (at least on the surface). There are both young and older ladies who wear traditional dress and/or head coverings. Some wear the “burkini” when swimming. A swimsuit which covers the legs, torso, arms and head…..but what is quite common is (especially in the young), very “western” dressed girls are good friends with very “traditional” dressed girls and mix happily despite totally contrasting clothing styles. In the street or on the beach.

It looked nice enough to spend some time there and we only had a flying visit, so we maybe got the wrong impression. We were hoping for Kas but it was more Cleethorpes (Note. I have never been to Cleethorpes …it is poetic license 😉 )

Heading back out to Olta tonight as there is more seafood to try !. 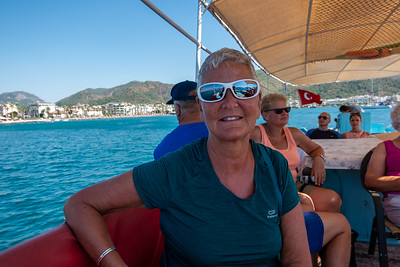