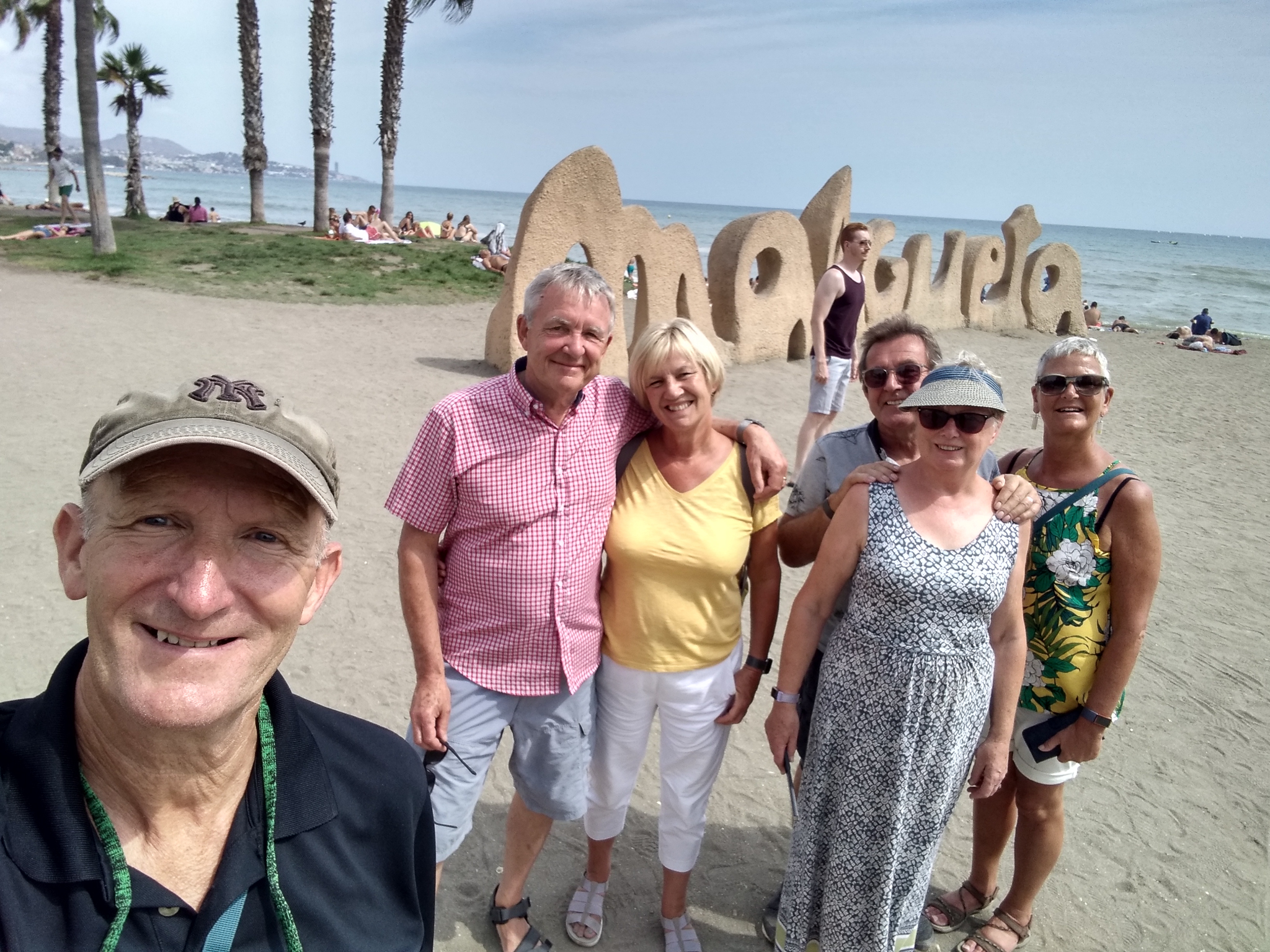 Our last full day was a trip to Málaga. Aileen and I know it reasonably well, but we are always finding new places, and just like spending time there anyway.

Ann, Ron, Ken and Ray know it less well so we were the tour guides! The first problem was how to get there. We discounted the car, so plan B was the bus or the bus then train.

We waited patiently….. and arrived very early for the 320 from Marbella to Malaga.  It isn’t a regular service and has the reputation of being “unreliable”.

I was engrossed doing my blog….. as the bus shot past in the fast lane of the dual carriageway showing no signs of stopping!. We later surmised it was full,… or you needed to throw yourself under it to make it stop….. Bugger!

Panic not, the 220 soon came along, which brought us into Fuengirola where we could catch the train into Málaga. That all went swimmingly…. but its not a quick journey on any of the routes by public transport.

We got off at the main station, but later realised we could have stayed on one more stop to reduce the walk a bit.

Ken craved a coffee so we stopped at a nice wee local place.  Aileen and I had a coffee Bonbom.      It’s an espresso, poured on top of a layer of condensed milk with the crème (coffee foam on top).  Really pretty, and nice in the occasional small dose…. if you like sweet condensed milk!

First stop was the food market, the Mercado Central de Atarazanas. It shuts in the afternoon so a breakfast / lunch option only. We split up as it was busy.   A lot of locals do their proper shopping here.

Aileen and I stopped for a caña (a small beer) at one of the several bars around the inside of the market. They also sell fantastic, great value tapas/media/racionies (different sizes of portions), and some at least serve you at high tables on the pavement…..if you are lucky enough to get a place!

We were lucky to get 2 tables together outside in the sun at the Medina Bar which we have used before. We avoided the one which charged us €30 for 2 langoustines in 2018!

The food and drinks were fab and cheap too. A couple of wines or beers each, a huge plate of mixed fried fish (a local speciality), artichokes and ham, a tortilla, Burgos black pudding and 3 x prawn skewers.    More than enough for us all and only about €34!

Next stop was Antigua Casa Dėl Guardia, which we were told about by a hotel receptionist a while ago. It is the oldest bar in Malaga dating back to 1840.  It looks its age too with a trestle-table bar and huge barrels from which they serve assorted sherries, sweet wines and vermouth. The pricing of the drinks is chalked on the barrels as a cost per Litre ! (about 9 – 11 Euro). No beer other than in bottles (and not many drink them). A real step-back in time and a quite different experience. Aileen and I had vermouth and the others dry and medium sherries. Just over 6 Euro for 5 drinks.

You can read more about them and even descriptions of what they have in the barrels here. http://antiguacasadeguardia.com/

We then wandered down the lanes to the north of the old town. It was just a lovely buzz and not crazy busy.  I had hoped to take them into Las Merchanas, but Ken wasn’t keen as he needed longer between drinks!   It is worth a stop if you are passing as it is completely dedicated to the Semana Santa religious processions at Easter, even the videos they show!.   No football or MTV, only the easter processions with their brass-band accompaniment.

Back into Plaza de la Constitución de Málaga, then up to the Cathedral. It is known locally as “La Manquita”, meaning “The One-Armed Lady”. That’s because a tower is missing as the funds were used to help British Colonies gain independence from Britain (The War of Independence in America)…..or perhaps less romantically, but more factual, the funds were used to build the road to Antequera as historic records show!

We carried on to the famous El Pimpi Bodega/Restaurant powerhouse.  Big, both outside and inside and always mobbed, but well run and good.  It also has an up-market version next door.  https://www.elpimpi.com/en/get-to-know-us/meet-el-pimpi/

Next it was up to Plaza de la Merced (Picasso Square!) where he was born. We had a look at the gastro food-market but it was empty and is more of a night-time place I think.

Back down past the Roman Theatre and below the Alcazaba (The Moorish Palace) and the Castle (Castillo Gibralfaro), before getting to the waterfront.

The $80 million super-yacht Azteca was moored there. It is owned by a Mexican businessman https://www.superyachts.com/motor-yacht-4291/azteca.htm, also the five-masted, sailing cruise-ship, Wind Surf.    She only takes just over 300 passengers. https://www.windstarcruises.com/yachts/wind-surf/overview/

A big cruise ship was anchored at the other side of the port at the bigger cruise terminal.

We cut the corner and went straight to the Malagueta beach… for a selfie!   I think we had worn out some of our party (well we are a lot younger?), so another pit-stop was demanded. The Chiringuito we tried wouldn’t let us sit if we weren’t eating, and standing at the barrels wasn’t well received, so we crossed the road and had a perfectly pleasant refreshment at very friendly North African cafe/bar/restaurant. Time to head back.

We tried to get to the roof terrace at the AC Hotel which gives great views over Málaga, the port and the cathedral, but they were “full”…. ar maybe they didn’t like the cut of our jib!   It’s the first time we have been turned away from here!…  just sayin’ ?

We found the bus station and got the direct 320.  It was fine, but it doesn’t half go round the houses….. literally!

“
We spent the rest of the evening “in”, which was probably just as well as we had drink and food to finish before flying home the next morning…… and we were all a bit pooped.

We got new neighbours next door, so maybe it was good timing we are leaving, as we lost elderly, quiet semi-naked neighbours and got young noisy, partying, outside TV watching Spanish neighbours!

Ian and Roz came to say goodbye on our last morning…. and to collect our unused drinks and food.

The trip to the airport was uneventful other than struggling to find the fuel-flap release button. I had to Google it in the end and found it under the seat.  The big bold plastic knob which would have advertised its presence was missing, so it was a tiny black metal lever on a black carpet. Little wonder we couldn’t find it.

Europcar checked the Rodius with a fine-tooth comb !.  Not an easy job as virtually every panel had scratches, dings, dents, scrapes before we got it, and mucky upholstery with a hole or two!      It was like the car Father Dougal was trying to repair in Father Ted!

It got a clean bill of health! …hurrah!. I am typing this on the plane at the mo, and Ken and Ray were heading to Madrid by train before flying to France.   We are off to Turkey in 2 days!

Thanks folks for a great week with a lot of laughs, and too much food and drink!, and many thanks to Ann & Ron for arranging and planning it all

Click on the pics to open the Gallery (which has captions)