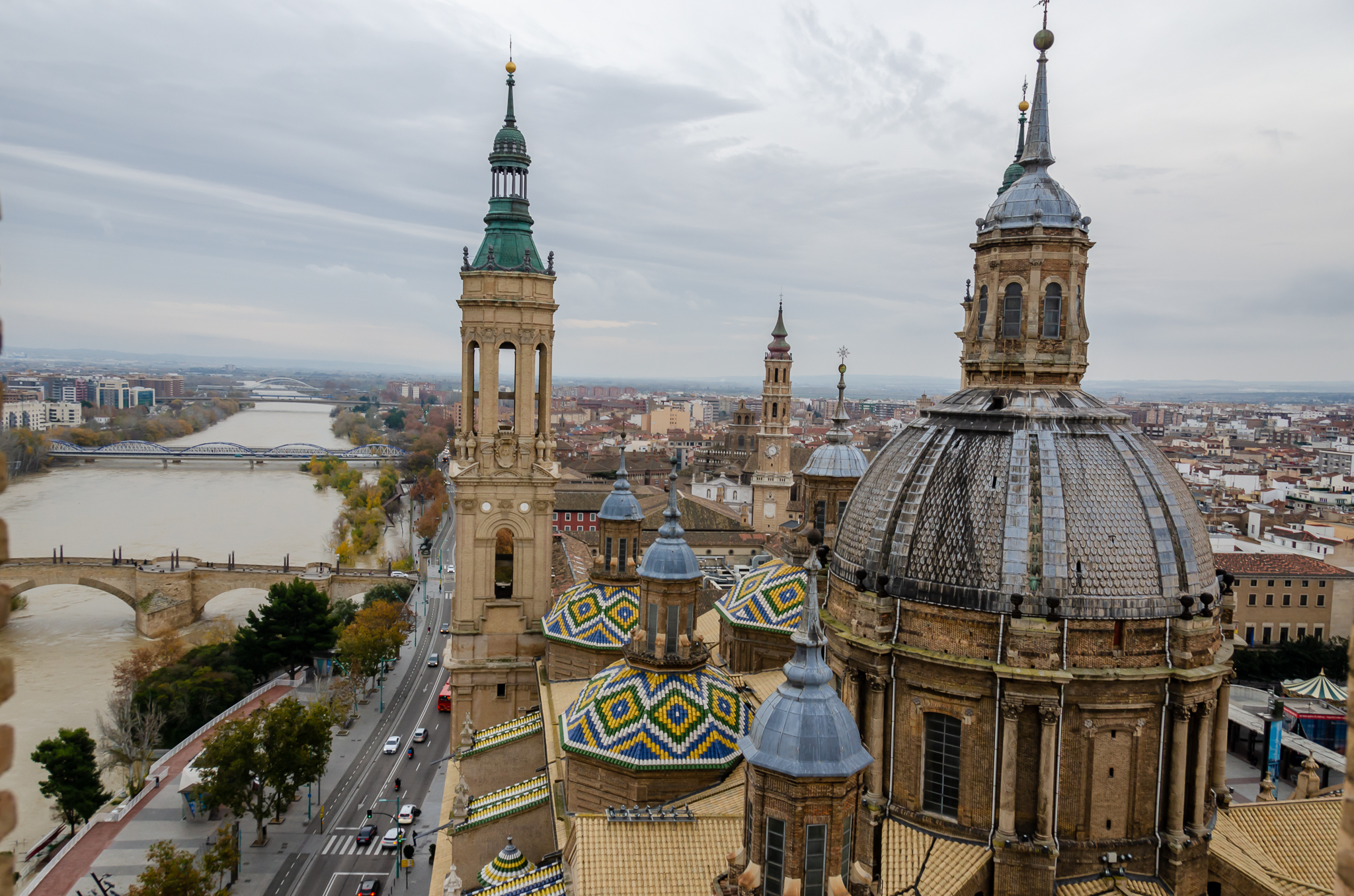 This was a fairly straightforward, 2 hour non-toll road run to Zaragoza. The weather was dry with high cloud and an eerie mist hanging over the landscape.

There were vineyards everywhere. Still bare, but they were being worked. Pruning, tilling and burning the cuttings.

The landscape changed from the rolling, lush foothills of the Navarre region in the Pyrenees, to Logrono in La Rioja where it was higher but flattish. We were passing from La Rioja (of the wine fame), to Zaragoza in Aragon.

In common with a lot of Europe, the landscape was dotted by hills which were convenient locations to put a castle/fort/church and a village.

We had to stick the car in a car-park first as we couldn’t check-in until 15:00. The apartment was right in the centre opposite the Basilica and the Town Hall. We parked underground nearby beside the temporary food market ….and ice rink, Christmas market, a nativity “village”. toboggan run, fair rides etc.

We took pot-luck and went into a bar/restaurant right next door to the food market (the food market was closing). A menu “del dia” for €12.90 including a drink. The food was superb! A goats cheese salad for me, ravioli for Aileen followed by steak and fish then desert. The ” free drink” was a bottle of wine between us. That’s not too uncommon in these parts! It’s nice enjoying a meal when you expect it to be good, it’s somehow even better when it comes as a surprise.

We collected the apartment keys from the offices of an Agency. We had parking underneath the apartment which was roomy and direct lift access to the first-floor apartment door.

The apartment was a new modern block which seemed to be exclusively for tourists. It had views over the main square onto the Basilica and the Town Hall and over some of the Christmas Market. It was modern and very smart and very well equipped. We liked it a lot and the location was superb.

We had more time to explore in daylight. We liked Zaragoza a lot and will definitely use it as a stop-off point in future and probably have more than one night.

The old town was lovely. Narrow lanes, smart shops, lots of nice bars and restaurants and “El Tubo” where it all happens at night! ….probably after our bed-time.

The Basilica was huge. We went to the top of the bell-tower (there was a lift most of the way!). The views would be better on a clear day, but here also the swollen river tells the tale of recent wet weather.

There are a number of churches and monuments to see an also Roman archaeology. The Roma Theatre was only discovered in the 1970’s when they were excavating for a new-build.

The Christian / Moorish theme runs strong here too. You can see that clearly in the mix of architecture and design in the Catedral del Salvador de Zaragoza.

Again, “surprises” are often best. A random stop at a quirky bar for a refreshment and a warm-up was fab. Quirky, retro, friendly and cheap. No tourists and right up our street 🙂

When we headed out again for tapas we followed Lonely Planet and headed for the nearby Meli Melo. We wouldn’t have gone into it normally as it was very gaudy and bright and looked more ice-cream parlour than tapas bar.

It was busy (no tourists as far as we could tell). The tapas/pintxos on the counter looked amazing …..and tasted amazing. For the quality, they were also very reasonable. We shared a quail on vegetable pintxo, a goats cheese with fruit and fig compote, a prawn on something pintxo and pigs cheeks. All excellent.

We wandered up to the El Tubo hot-spot but it was all pretty dead. We went into Bodega Almau which was a family business several generations old. A nice wee visit.