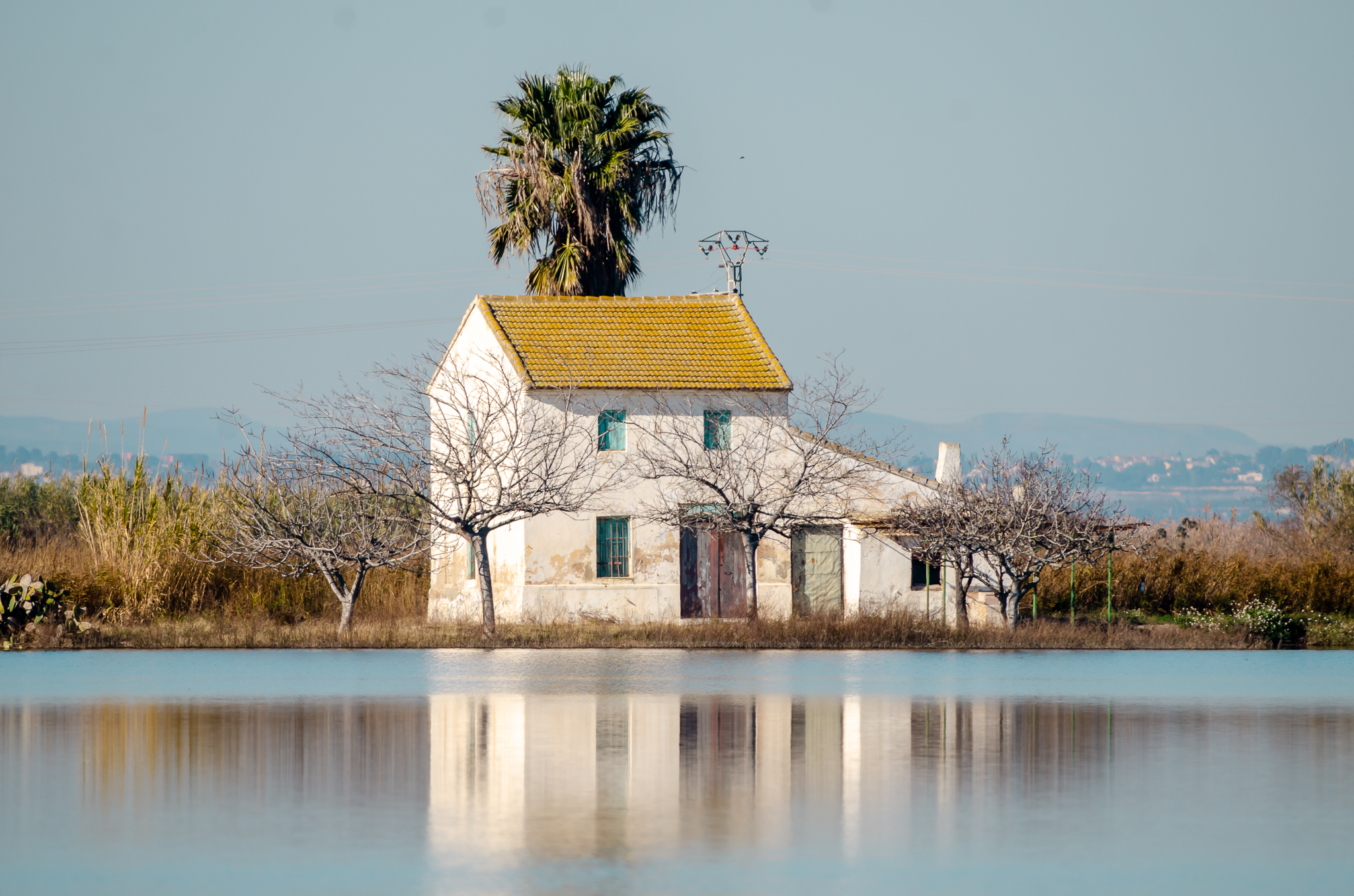 We had heard L’Albufera just on the outskirts of Valencia was worth visiting so we headed off for an explore.

It’s a large freshwater lagoon only 10km from Valencia and separated from the sea by a strip of land and beaches. It is famous for rice growing, fishing and wildlife.

The local press was full of news of the tolls being removed from the AP7 Toll road from south of Alicante to Tarragona (south of Barcelona) . We decided to give it a go ……and yes the tolls have been removed but the GPS still shows the AP7 as a toll road, the road signs all still say it’s a toll road and the barriers etc are still there. It certainly made it a lot quicker to get to Valencia ….top-down 🙂

We saw bright orange fruit on bare trees as we drove along (not oranges). As we came off the free “Peage” we stopped alongside an orchard. They were Persimmon. We scrumped one which was already on the ground 🙂

One of the problems with some nature reserves is figuring out how to get access to it. That wasn’t a problem in this case !. We saw a couple of medium-sized hawks as we drove towards it L’Albufera then a small one with a really fast wing-beat and erratic flight. My guess would be a Merlin.

I randomly plugged El Palmar into the GPS. The whole area is a network of roads crisscrossing the wetland/rice fields, quite apart from the large lake you see on the map.

Almost immediately we were close to Glossy Ibis. We stopped for some pics. Of course, we assumed we would be as close to the wildlife everywhere we stopped!. I think we were particularly lucky this time 🙂 . Marsh Harriers and other distant raptors were flitting about.

I assumed El Palmar would be one-horse-town. Yes, it was small, with narrow streets, but it had a nice buzz and a couple of nice wee restaurants.

We stopped for lunch at Raco de Les Eres for proper Valencian cuisine. It was a Restaurant “Arroz” (a rice restaurant)……although it did do lots of other foods !

A nice bowl of mussels with fab bread and crushed tomatoes, followed by a dish of Valenciana Paella (chicken and rabbit). I am not a big Paella fan generally but I must say the Paella here and even the one we had in Gandia was really good.

As we went further into El Palmar the town centre was busy too with quite a few restaurants. You can even get a bus from Valencia straight here. You can do boat trips from various locations too.

As ever, Spanish opening times can be a challenge. The Interpretación Centre, Racó de L’Olla closes at 14:00 every day …….

We carried on to north Cattaroja to allow us to go south again to Tancat de la Pipa Reserve. It, of course, was closed too, but we also discovered you needed to book in advance anyway. It didn’t really matter as it was late in the day and the journey there through the rice fields / wetlands was stunning.

We stopped briefly at Port de Catarroja where there was a restaurant and a canal with lots of wee boats. Lots of wildlife here cheek-by-jowl with rice processing factories and industrial history in the form of old chimnies.

A short distance later we saw something hovering ……too small to be a kestrel…..it was a kingfisher !. I managed to grab a few shots. Always a lovely “spot”.

A short distance further we saw what looked like buzzard stationery in a field…..except it was female marsh harrier not a buzzard!. We have seen plenty flying, but never one stationary. It moved a bit shortly after we stopped the car but settled again. I managed a couple of shots of it before it moved 🙂

Looking over the vast wetlands as the sun went down was special. Valencia in the close distance and mountains in the far distance.

We will be back soon to spend longer here.

Click on an image to open the Gallery with Captions