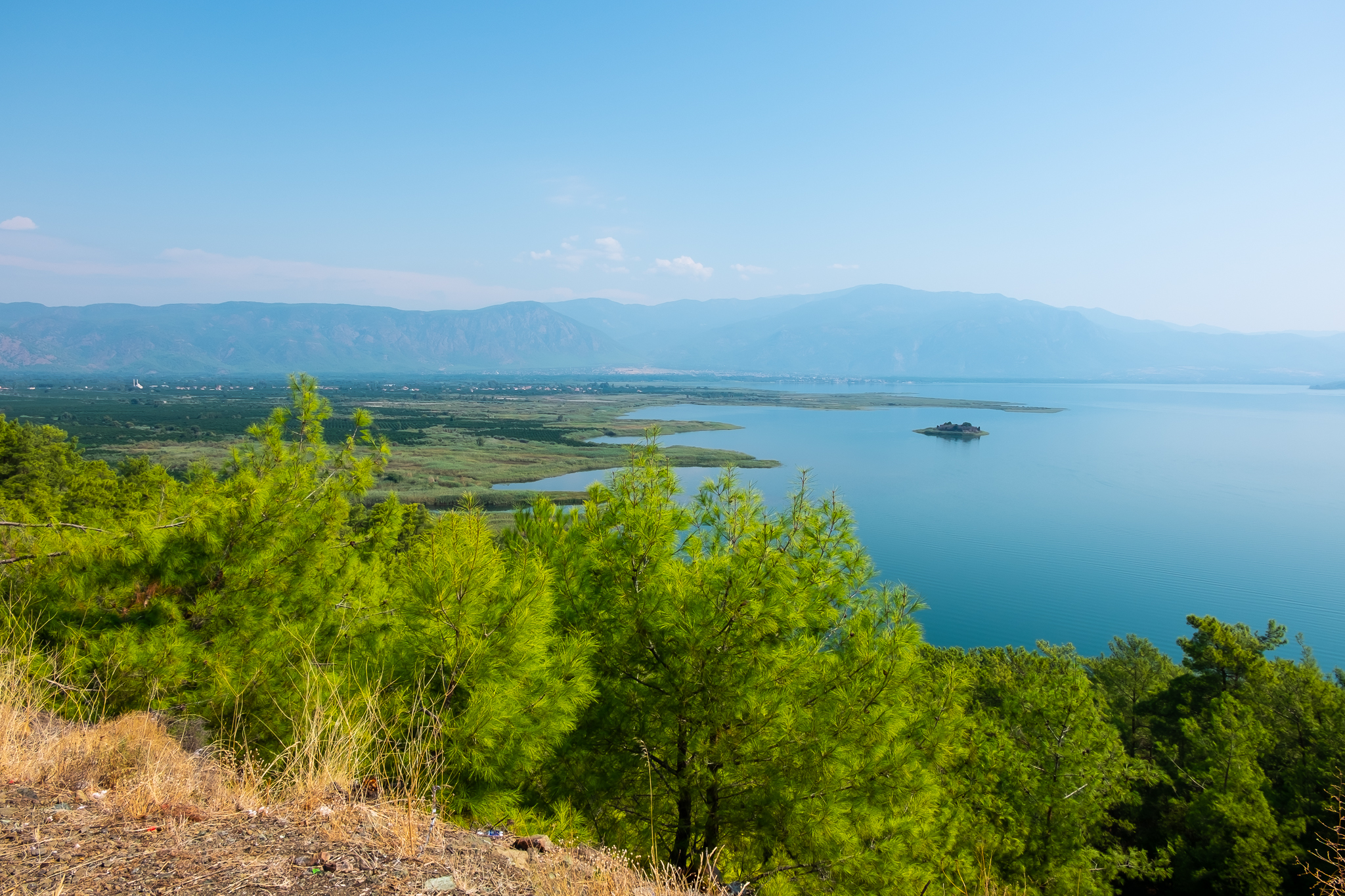 Today we are moving on to Akyaka. We had a couple of nights here in 2006 when we pulled out of buying the apartment in Üzümlu and went on a tour instead.

It’s only about an hour away from Dalyan where you turn off for Marmaris.

We planned to visit Köyceğiz first which was midway, and on the shore of the huge lake at the opposite end from Dalyan.

We could have gone the “normal” way back to the main road and via the D400, but I liked the look of the wee two-car ferry we found on our walking explore. Who doesn’t love a ferry!

On the map it looked like the road to Köyceğiz from the ferry was twisty and didn’t have any towns.  What that means in Scotland is a single track, pot-hole strewn, slow, tortuous grind.   Exactly the type of thing I like!

I couldn’t force Google maps to route me via the ferry, but it reckoned it was about the same time to get to Koyaciz using either route.  It seemed unlikely but we were in no rush.

The ferry crossing was great fun. It took a few minutes and cost 20 TL (about £3).   It should have been a RoRo (Roll on roll off), but I guess one of the ramps was broken as you had to roll on / reverse off!

Google maps was right enough with the time to Köyceğiz on the “back road”. It was twisty in places, but two lane, a centre line, and a great surface.   The views over the lake, mountains, wetlands and lush forest were stunning.  Lots of good stopping places too.

It would be great for cycling.

There were signs up to beware of tortoises which we liked, but didn’t see any real ones.    I assume we were to try and avoid running over a tortoise rather than a concern for our safety. i.e they weren’t armed or erecting roadblocks etc. 😉

Köyceğiz is a sleepy farming town (lots of citrus trees) but also fishing in large freshwater lake (well brackish freshwater from the tidal flow coming up the Dalyan river).

It has a long promenade and looks more seaside than lakeside. It almost looks like Fethiye Bay as you gaze across the lake.

We had a look round both small harbours, and tried to get some pics of the little grebes diving for fish.

We had an OK frappe and a nice fresh fruit juice at dozy, unwelcoming cafe on the prom. They overcharged but not by enough to get upset about (although we did have words)

We moved on and shared a wrap at Tuana. Much more switched on and friendly. The toasted wrap was excellent.. as was the shared apple pie!

There was a bit of jiggery poker to get onto the D400 dual carriageway, as the underpass we needed was dug up as was the slip road going the opposite direction.   No signs, so you followed the leader and cut across the contraflow!

As the high ground above Akyaka on the way to Muğla approached, the sky got darker and flashes of lightning speared straight down.  The forecast was for a thunderstorm… it may well be correct!

Our digs are The Portofino Boutique Hotel right in the bank of the clear, fast-flowing Çay Creek which empties into the Gulf of Gokova.

I don’t imagine the hotel is old, but it looks old.  The room is very boutiquey with wooden Ottoman arched doors and windows, exposed stonework, and olde-worlde charm.

We unpacked and nipped across the road to grab a beer by the river just as the rain came on. It should pass soon then back to clear skies and 30+ Centigrade.  And it did rain, thunder and lightning along with a stiff breeze…..which then turned into a proper hooley !

Despite the drops of rain and strong gusty winds disrupting the party, Akyaka is clearly way more upmarket than Dalyan. Lots of Ottoman Style Boutique-hotels. Lots of flash cars parked and lots of trendy shops and bars in the back lanes. So trendy were some of the shops’ decor and names I had no idea what they were actually selling…..

We headed into Akyaka and picked a place from Trip Advisor. Lots of stars and great review. A meze style place called Inceden Meyhane.

The wee place we picked looked nice and almost empty (we were early in the evening). We had a nice welcome and a friendly girl explained the cold meze cabinet. Everything was a bit pricier than Fethiye / Dalyan but hey-ho, not crazy…..The cold meze was fine. Spicey tomato paste, cheese and walnut paste and an Armenian/tahini type mix, all served with baslama bread and olives …..then it all went downhill!. We ordered hot Turkish liver and a dish of prawns ……it took forever.

The “owners” (parents ?) who welcomed us were having their dinner. Enjoying their soup in the middle of the restaurant as nothing happened around them. The couple of staff there didn’t have a clue. The restaurant got busier which didn’t help. The guy who checked us into the hotel turned up as he was a waiter at the restaurant too. Absolutely no connection to the hotel, just a weird coincidence. We wished we had listened to him and tried one of the two restaurants he suggested (when we asked)….and neither suggestions were this one!

The food wasn’t terrible, but very much style and trendiness over substance. Not our bag.