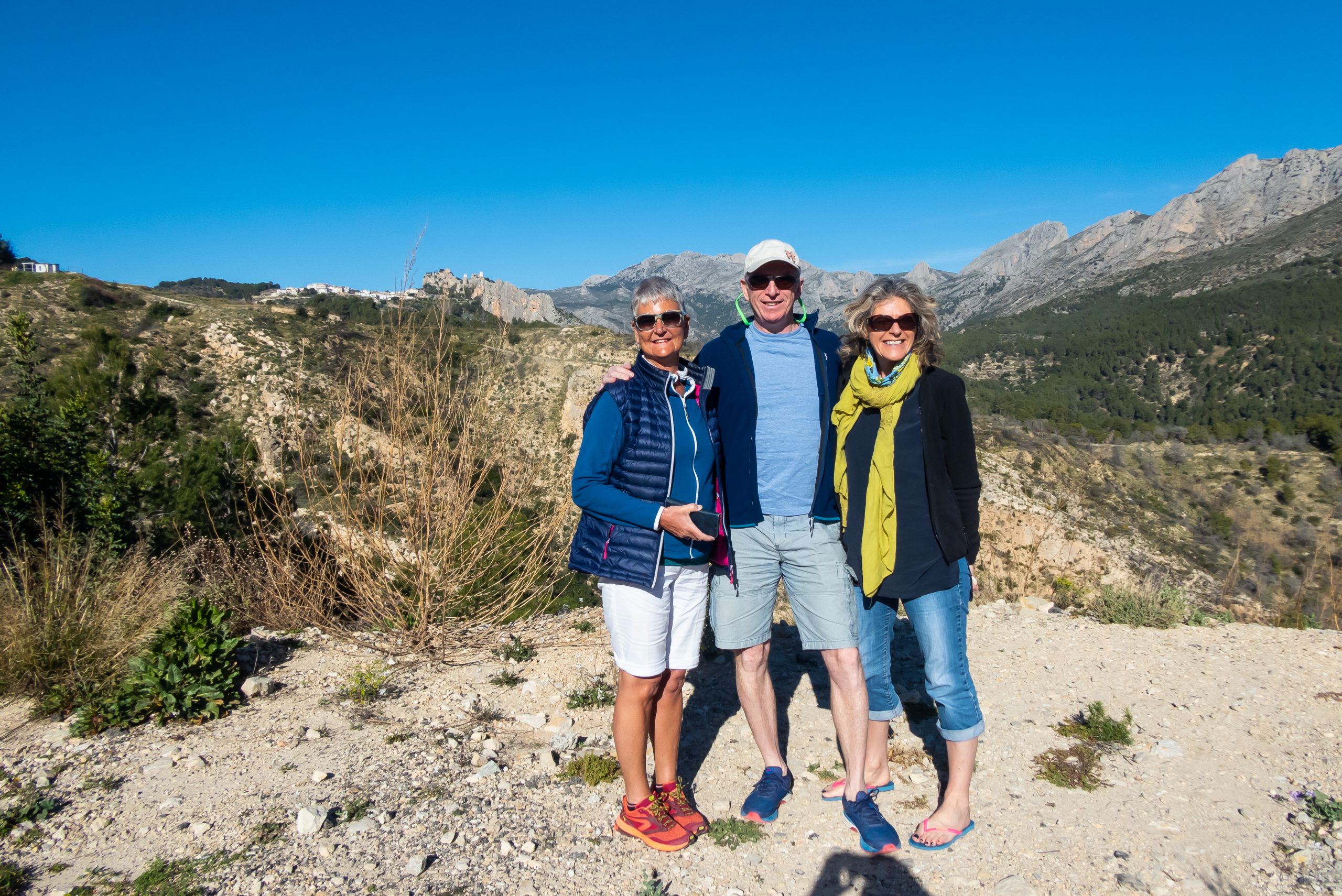 We have passed Guadalest Castle a couple of times on previous visits. It’s only a few miles from Benidorm…. but in a parallel universe!

Lovely, scenic twisty roads to get there either through the gorge/valley or from high on the hillside to drop down into it. The mountains are craggy and rugged.

The castle landscape looks impressive from all angles, with a short knife-edge rocky ridge sticking out of the ground and balancing a couple of modest towers atop. It doesn’t look like there is a lot to see.

On our first drive past from the gorge we couldn’t find anywhere to park….. even in February! Last time we came in from the North and didn’t have time to stop. This time we were going to visit no matter what!

We had a bit of a discussion before we left Xàbia as sitting in the back of the SAAB (or any 4 seater convertible) with the top down can be miserable. It can be very blustery and cold even in decent weather. It’s not the same as sitting in the front especially if the back seats are empty and the wind deflector is fitted.

Moira doesn’t like being cold, and she can get travel sick….. all roads to Guadalest are very bendy!

Fortunately the temperatures were often in the 20s when K&M were here and I tried to be less “enthusiastic” than normal when driving. Aileen & Moira hopped in the back and survived the journey. I was conscious we had mid-journey “vomit” situation on that road a few weeks ago!

We got parked OK and headed for the “castle”.

We still didn’t really know what we were going to see!. A higher and a lower lane took you to the single entrance to the castle. This was a fissure in a rock-face (closed at the top) which was fashioned into a tunnel/arch.

Once through the arch/tunnel, you could enter the home of the Osuna family, which then gave you access to the castle, which then brought you back down into the fortified village.

It is one of those time you don’t have any expectations (certainly not high expectations!) and are pleasantly surprised. The house was a maze of corridors, rooms and levels. It was laid out well with interesting items from grand living of the past (but not sumptuous by modern standards). The “castle” was more just a lookout position as the work of the castle was done by the geography (geology) of the rock it sat on top of.

We were all charmed by the visit.

As Moira had been big and brave on the journey here, I took the gamble to head to Col du Rates for a late lunch. It was back down the twisty valley/gorge road, then up a much narrower, twisty pass. We made it without any emergency “medical” stops!

We like it up there. Great views and busy with walkers and tourists and cyclists. It’s a “must do” if cycling in the area.

We sat outside in the sun at the German(ish) restaurant and selected from the Teutonic menu. The portions were enormous!

Well-fed, we headed back to base via the village Jalon (Xalo) in Vale du Pop. It was pleasant enough, but didn’t set the heather alight. Maybe we just didn’t find the good places

A very pleasant day out

We went to Bar El Fuego at L’Arenal for breakfast. What a difference a day makes!

It was a bit misty/cloudy but far from “wild”. The sea didn’t agree though!. The flat blue mirror from yesterday, was now a grey, bucking cauldron!. The surfers were enjoying it though!

Fortified by internationally inspired breakfasts, we drove to nearby Moirara for an explore, then onto Calpe.

We parked near “Calpe Rock” (Peñon de Ifach) and entered the National Park (of which it is part of). Now we knew it took 2.5 hours to walk to the top and back.

The access was through a tunnel …and we also so the park was going to close soon ! (it was about 13:30 and was due to “close” *we thought) at 14:00!. As people were still coming in at 15;00 I guess it must just have been the visitor centre which closed at 14:00……however another National Park we visited at L’Albufera literally closed the gates at 14:00 and stopped people entering well before that!

The weather was clearing as we started up the path. A choppy sea, but showing it’s turquoise roots. We reached the tunnel which we knew was polished marble and slippy, although it did have a handrail (hand rope!)….pitch black though!

Aileen let the rest of us go and explore. Kenny kept guard at the tunnel exit as Mo and I explored further on. We spoke to a Dutch (?) couple who were coming down. It didn’t look as hard a walk as some of the write-ups said. We wished we had just bitten the bullet and walked it, but we left half the party behind us!

Calpe also has Salinas so we took a bit of time out to watch the Flamingos. Interestingly we saw some disturbed ground close to the path to the viewing platform. I’m pretty sure it was wild boar scrapes.

We had thought that was the end of our sightseeing but I drove back a slightly different way and passed a Garden Centre we had seen before. It was notable as it had an enormous steel Whale sculpture in its grounds!

The Whale was impressive. You could walk inside the “ribs” which I guess they must use for “events” etc. There was a huge ant, fish , dragonfly etc etc, This whole area is peppered with brilliant steel sculptures. I guess this is where they all come from. At the back was the workshop with two guys beavering away, The abandoned or unfinished projects cast aside like broken-down robots in the Starwars scrap-heap. Another surprising visit.

Kenny & Moira had a civilised flight time. 12:45 from Valencia meaning if we left Xabia at a sensible time in the morning, we had plenty of time

We left in plenty of time. As we were heading up the Motorway in a leisurely fashion Moira piped up from the back “errrrrr looks like the flight is 11:10” …….Aaaaah …..that adds a bit of jeopardy to the journey!

I had never been to Valencia Aiport before, although I had checked out the drop-off arrangements thankfully. I couldn’t afford to get lost or get caught in traffic though!

When Google Maps was telling me something different from the Road Signs it was a bit fraught, but we got there with enough time……just!

The week really flew past. Kenny and Moira were great company as ever, and we had some great laughs 🙂