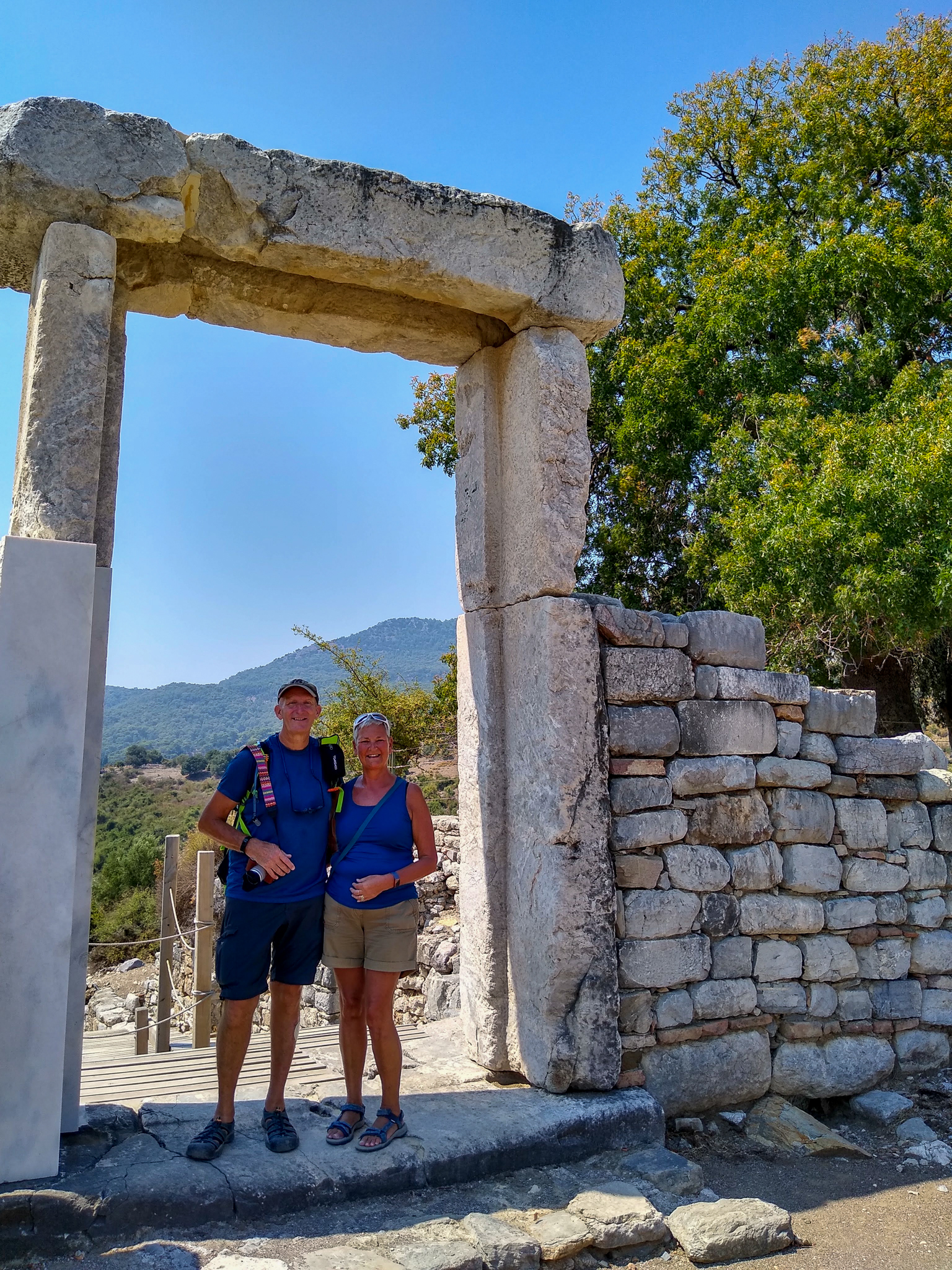 We thought we had a plan for today. Boat trip at 10:30 to see the sites along the river…..except when we started looking at the detail we were more interested in going to Kaunos the Lycian City and the river / birdlife / wildlife than fannying around at mud-baths for 2 hours and 2 hours at Iztuzu beach (lovely as it is). I guess we aren’t “standard” tourists!

We re-convened, had a look at Lonely plant in PDF on my phone from Dropbox and formulated Plan B.

We could wander back to where the rowing boats ferry you across the river and walk 2 Km to Kaunos from there. It’s really not very well advertised!

It was only 15Tl for both of us to do the return crossing (about £2!). We have been really impressed by the (mostly) ladies doing the river crossing by rowing boat. Some stand and row, some sit. All very efficient despite the current and wind-drift….and big wash from the river-boats travelling at way higher speeds than is necessary (safe).

In fact there is another part to the river-boat behaviour issues. Other than speeding, their propellers do a lot of damage to the turtles who are in the rivers. The turtle hospital at Ituzu beach do what they can which can be to patch physical damage to the shell, or it can be damage which means they are unable to dive or surface properly (maybe damage to the head). They have had some turtles for years in tanks hoping they will eventually recover.

The boats are offered protective guards to go round the propellers for free, but many won’t fit them 🙁

Anyhoo, our lady taxi-driver took us across. All was well apart from my baseball cap attached to my rucksack having dangled in the water all the way across !. We had a pomegranate juice in a kosk at the far side. The people were lovely as was the pomegranate juice, and we thought….this is captive-tourist-rip-off-territory! Thankfully it wasn’t

We hadn’t realised there was a road on the far side and a fair bit of agriculture. You walked closer to the Lycian Tombs carved into the cliffs. There was a huge cemetery there as well. The main modern population was on the other side of the river. Did the existence of the Lycian tombs mean modern humans wanted to be buried there too?

The walk was very “rural” with tractors coming and going, a number of donkeys, mules and goats, and pomegranates, olives, figs, grapes etc etc. Also ladies selling their honey and fruit juices at the side of the road.

Kaunos soon arrived. Our Museum cards we bought last October came in handy again. Only 70Tl, but we got in free today saving 28Tl. They have saved us a lot of money over or Cappadocia, Pamukkale, Ephesus trip and more locally too.

We were pretty impressed by Kaunos. It is elevated above the flat wetlands and farming delta. There is a further elevated defensive position. It is spread over a wide area with a church, a theatre, a harbour, agora, roman baths etc. It was one of the most important Lycian cities which of course then became Hellenic then Roman. The views over the wetlands and delta were stunning.

Interestingly the name is related to “green” which they think is to do with the complexion of the residents …..and could be related to malaria!

I tried to get to the top of the defensive position but Aileen wasn’t keen and there was no obvious path, just a network of animal tracks. I’d like to go back and do it one day as the view from the top must be amazing.

We wandered back and got our taxi-row-boat back to base. In fact she told us her daughter had the small place we had our pomegranate juice at the start of the day. The circle was complete!

We really enjoyed the visit and will add it to the list of places to take visitors.

We popped out at night for a refreshment and some good tunes (they know the age-range of their customers !) .

We weren’t particularly hungry so we picked Firit from Trip Advisor. If truth be told we loved it!. A simple Turkish place down a lane, just a stones-throw from the busy, bright places. It was an all-tourist clientele, but the food and menu was very Turkish. Another un-pretentious family establishment which actually delivers.

A cheese and mince pide (Turkish Pizza), and oven meatballs in tomato sauce. All just spot-on flavour and seasoning-wise. £17 including a nice glass of wine and a beer.

Click on a pic to go to the Gallery with captions.