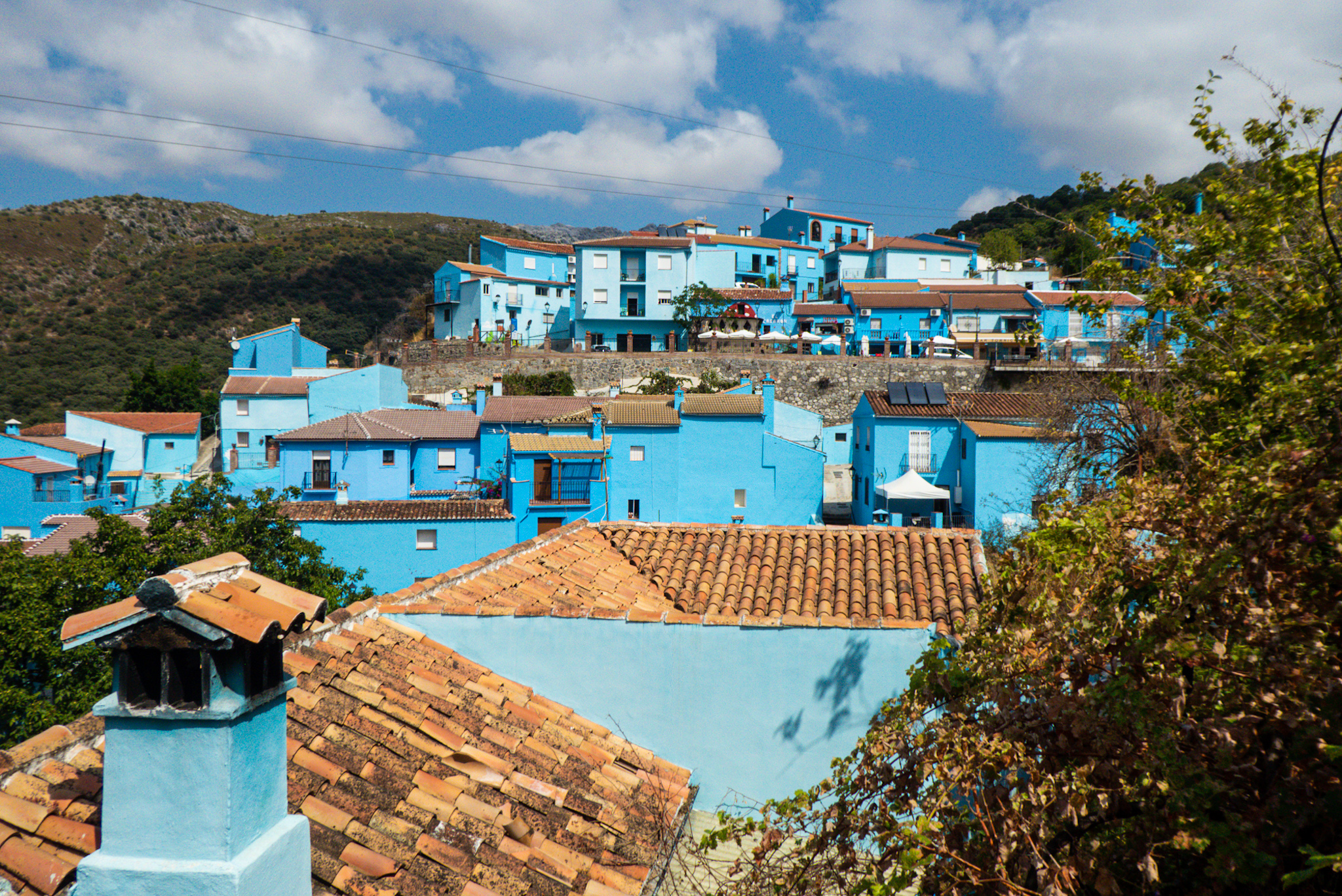 Friday was a “free day”. Ken and Ray went for a local walk, Ann and Ron had some holiday admin stuff to do and we decided to head out in the bus.

We had thought about visiting Júzcar before but we didn’t have time.

It “was” a white village….. now it’s blue! Here is the story from Wikipedia

“The village had been one of the White Villages of Andalucia, with buildings traditionally whitewashed. In spring 2011, buildings in the village (including the church) were painted smurf-blue by Sony Espana to celebrate the premiere of the Smurfs movie. 4,000 litres (880 imp gal; 1,100 US gal) of paint were used. While the original agreement with Sony España included painting the village white after its promotional ended, in December 2011, the village hall organised a special referendum vote for the village residents to determine if the village would remain blue or revert to white; the referendum results indicated the village would continue as blue with no date for reverting to white. One indication as to why might be that an estimated 95,000 tourists visited the village in the six months following the blue paint job and that the village had previously seen about 9,000 tourists annually.”

The road up towards Ronda is stunning. Wide, well surfaced and bend after bend. We had a clearish run up…. although the speed limit is only 60Kmh and there are speed cameras. That was about fast enough in the bus!

The stretch to Júzcar was narrow in places, but again a good surface with plenty room to let cars pass.

We saw loads of Griffon Vultures swirling around. On the way back we stopped and realised it must be a regular perch spot for them given there was a rare layby!

Júzcar was definately blue, with only the very occasional rebel white house!

We didn’t stay too long, before heading back with a stop off at Benahavis which was almost on our way back. It is near Marbella, a short distance up into the mountains and near numerous manicured golf resorts.

We had heard it was well known for its concentration of great restaurants…. and ex-pats!

It is definately pretty. It was virtually deserted at 14:30, but clearly being set-up for crowds of people at night. The narrow lanes full of tables.

We didn’t do any pre-research for eats. One we saw in Trip Advisor had people in it. It was upstairs but we couldn’t figure our how to get in! The only obvious door was locked and out of action!

Other places were deserted. Eden has some people in it, it was number 2 in Trip Advisor so we went for it.

It was nice but very “English”. The tapas were more compact quality pub-grub than Spanish tapas. Nicely done, nicely presented and tasty……. but the perfect example of one man’s 5 star Trip Advisor is another man’s 3 stars. Nice enough, but we like more authentic.

We completed our circuit. Benahavis is worth a visit if you are in the area. I am sure it will be lovely and buzzy at night. For us it felt a bit “theme village” for the benefit of the expats and golf-resort visitors. That’s probably unfair, but…..

We headed back to meet up with the rest of the crew who also had a successful day.

Ian and Roz came over for a refreshment before we all got taxis to the swanky but nearby Oceana. Very swish, light wood, wafty light fabrics, right on the boardwalk overlooking the shore with the sliding windows all pulled-back. Stunning as the sun went down.

The ambience was rounded off by the coincidently attractive waitresses in short, clingy black dresses. Ron compared them to the “band” in the Addicted To Love video…!

A nice meal and a walk back to base along the boardwalk with a stop for a refreshment. It’s is definately more tourist-focused as the Chiringuitos were closing by 22:00, not getting revved up then as they would be for a local crowd.

Another grand day out.