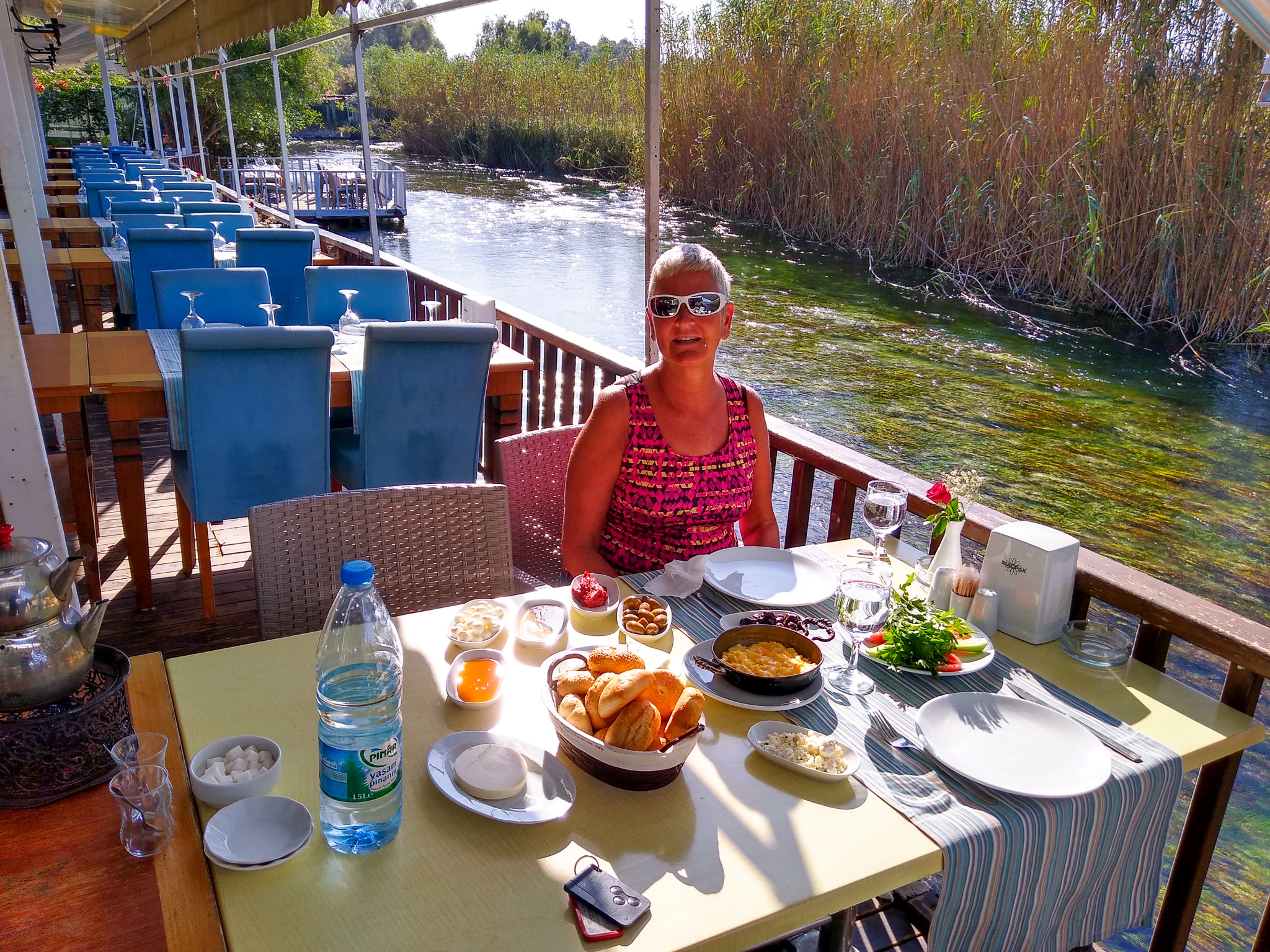 It was touch and go whether we went for breakfast or not, but sıtting by the river swung it for us. We went.

In my best Turkish…. which consists of very few words and a total lack of past, present or future tense or possessive pronouns. I was quite pleased with my “small breakfast with eggs, bread butter and honey & tea”, seemed to be understood. It all came along with tahini , tomato paste, two types of olives, 3 types of cheese, tomatoes, cucumber etc!

To be fair that was a small breakfast, as it missed out the two potato dishes, deep-fried cheese rolls and assorted jams and numerous crystallised fruits!

It was a lovely spot to start our day with ducks and geese drifting past, and moorhens hiding in the far bank….. and we finally saw a couple of fleeting glimpses of a Kingfishers. Always good way to finish.

We checked out of Portofino Boutique Hotel…oh how that term is abused and misused! It was a lovely big room with a fantastic balcony with great views, and we were very comfortable, but it just wasn’t run like a hotel… far less a Boutique Hotel. The staff were charming and lovely so it can only be a lack of management and lack of training.

The room wasn’t made-up at all, and coffee etc not replaced. Now we don’t really need our room made up every day but if you call yourself Boutique and charge accordingly, you expect the service.

They only charged for 2 nights rather than 3, so we got over it ?. That was about a fair price for their shortcomings. Time will tell if they suss it and Booking.com nab us later! We normally say if business undercharges us but in this case …..

Leaving Akyaka we stopped for a closer look at the “hay ricks”… which weren’t hay, as Ken asked me on Facebook what they were! They were very “twiggy” with lots of seed pods. I assume they are drying the seeds. My guess is sesame seeds, but Aileen has asked Sarah to ask Ömer who was born a few miles away!

We also stopped at rock tombs. I assumed they were Lycian but they were Carian. Caria was to the west of Lycia, so this was the area they met and exchanged ideas.

The Villa was less than a 2 hours drive away, so we did it in one go. Driving and pedestrianing ….(is that a word ?) ….is “different ” in Turkey. The roads are generally good. Traffic is generally not too heavy, but rules and conventions are different.

Roundabouts are “normally” give way to traffic entering the roundabout. i.e the opposite to what we are used to. If a car is on the roundabout it has to stop to let you drive straight onto it…..however, as soon as you are on the roundabout you may have to stop to let a car join it at the next exit. I say “normally” because some of them have “Give way” signs as you approach the roundabout (i.e. treat it like we do in the UK)….now that’s just asking for trouble!. Nobody has a clue who is doing what, so it’s every man for himself. You don’t commit until you see the whites of their eyes! …..And hope the car behind doesn’t ram you as you slow down to give-way, when he is expecting you to floor it into the mele!

The other interesting aspect is how much space do you need to pull-out or cross traffic. In the UK the Highway Code rule (and what most people practice) is you shouldn’t make other cars change their speed or direction i.e. don’t make them brake or swerve!.

In Turkey it’s much more simple. The rule is “do they have time to slam on the brakes before hitting me”! Any gap is big enough be you a lorry, a bus , a car , bike or pedestrian. A gap is fair game if you think the vehicle about to hit you has time to brake! No doubt this is a major cause of the carnage on the roads.

Pedestrian crossing are interesting. In Europe as soon as a pedestrian steps on the crossing, cars screech to a halt. In Spain and Italy, pedestrians take it to a higher level. Thy lurk behind parked cars and leap out to give you a minimum warning. You need to be on your toes driving there!.

In Turkey the white paint on the crossing is a complete waste of material. Traffic simply doesn’t stop. The problem of course is tourists who are surprised when traffic makes no attempt to stop!

The authorities seem to be keen on changing this behavior, but painting some additional words on the road saying the drivers really have to stop …..hasn’t modified behaviour one jot!

You get used to all of of the above, it’s just “different”. The big problem is the nutters. Overtaking three abreast, crazy speeds etc. Today’s knob-award was a modern black saloon. It was through a 70 Kmh section of dual carriageway with houses and businesses each side. Just a steady undramatic flow of traffic. I saw the knob coming up fast behind. I indicated to move to the inside lane to get out of his way but he didn’t look like he was shaping up to let that happen, so I stayed where I was to avoid a collision. He undertook me, pulled back in front, then was shaping up to look for a gap BETWEEN a car and a bus. To cap it all a couple of hundred yards later he pulled into a petrol station. Little wonder the death toll on the roads is so high.

The Villa was looking good when we got back on home turf.

We emptied the car, did minimum putting away, checked the Honda. All was good so down to Bella Gusto at Olu Deniz for a kebab (one of our favourite lunchtime stops). It is great to be back. Spending time in other places is always great fun and enjoyable for all sorts of different reasons.

As we did our patrol of Olu Deniz we had the added bonus of bumping into Fran & John at one of their regular haunts (Cloud 9). It’s good to be back 🙂

As we visited Dalyan and Akyaka etc. it was interesting considering what we liked about places and what we weren’t so keen on. Trying then to view the area we know and love as first time visitor isn’t easy!. I guess a place ticks enough boxes….then you forget all that and understand the location a bit better. Friends and activities being a big part of what makes the whole experience special.

Yes, everywhere has changed and evolved. Some things for the better, some not so much, but that is the way of the world.

We still enjoy Olu Deniz hugely. Yes, it has changed, and yes it is a bit more swish. We only ever use the places along the front (Buzz, Bella Gusto, Sey etc), but the presence of the Paragliders…chilling out under the trees with their mates and their kit, and the cool-chillout music played in many of the bars makes it like nowhere else we have been. We still love it.

Click on a photo to open the Gallery with captions