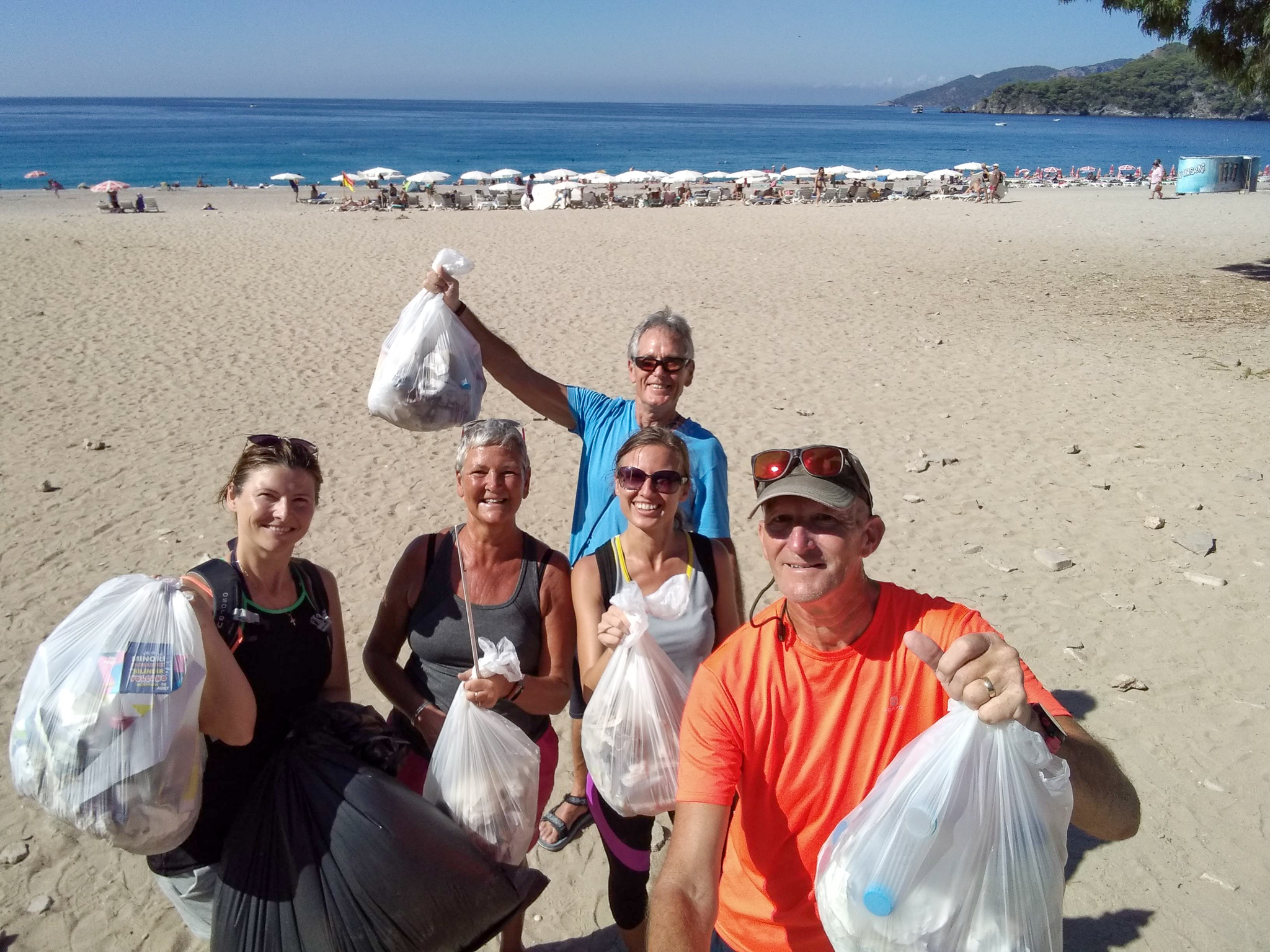 Apologies this is all a bit messy as it’s more of a diary for ourselves. It’s hard to keep track of what we did when unless you write it down!

Straight back into things with a Sunday walk…. this one had drama! It was a nice Oludeniz Hash walk at the nearby (to Calis) Ciflik. It started well. I was on Hash Flash (photography) duties as Ann was away galavanting.

Roko was unleashed despite spouse opinion to the contrary. He headed straight back to the car, so Andrew had extra walking to do to retrieve him.

We then came across a rottweiler doggy-paddling up the middle of the concrete-lined irrigation canal (there is a huge network of these here). Humans and animals have drowned in these as they can be difficult to get out of.

There were several problems. There was a fence between us and it, the Rottweiler looked perfectly happy swimming up the centre on the canal them swimming back down and swimming up again. It didn’t appear distressed and did land on a muddy patch for a few seconds….. then started swimming happily again. Another problem is rescuing a strange Rottweiler from his territory….. there could be a “teeth” situation!

If nothing else, expats love their animals….. especially any which need saved ?. John and Steve crossed a bridge and John waded in to grab the dog by the collar and drag it out with Steve’s help. No canine teeth were involved!

I’m not sure what a relieved dog looks like… but this one didn’t look that way! In fact, it was so keen to get back in, Steve slipped into the canal trying to save it!

One skinned elbow and a drowned phone later, and the dog was reunited with its owner….. who seemed unimpressed. He threw stones into the canal for the dog to “chase”!

The Hash circle at the end did the normal with new Hashers, Hares, Returning Hashers and Birthdays. It also had a “Hashanory” retold by Chris. Four Hashers had been invited to a Turkish wedding by the parents. They enjoyed the celebrations and food and pinned money onto the brides’ dress according to the tradition. They then realised they were at the wrong wedding, but rather than sneak out they unpinned the money from the (wrong) brides dress to re-gift to the right bride!

Monday was Yoga at Baracuda them a paddle on the Lagoon. Braw ?

Back on the bike on Tuesday (after dropping the car off at Pegasus for them to fix the candle-impersonating headlights). We were heading to Kemer. Fortunately the one near Fethiye, and not the one near Antalya!. A cycle up the D400 and back via smaller roads and couple of tracks. One section was unpleasantly loose, a sharp and squirmy. The 68 Km was enough having had a long layoff. My arse was sore and that didn’t happen at the start of the year!

Wednesday was a 15km walk at Günlüklü. A good walk with stunning views over the Fethiye and Gocek islands….. but I could swear there was a lot more climbing than descent. It felt like the famous drawing of the Penrose Stairs where they keep going round in a square,… but always up!

On the drive back I checked my mirrors approaching red traffic lights. Nothing there, so I pulled into the outside lane….. until I heard a horn and caught a shape out of the corner of my eye. More luck than judgement, but fortunately no collision. No excuses on my part, just blindspot and not double-checking. I later made my apologies to John and Linda who were also on the walk!

We had a lovely evening at Denizati with Nigel and Jayne. All of those elements were a totally new experience. We hadn’t eaten at Denizati before but we had heard many good reports, but more unusually we hadn’t met Nigel and Jayne before!

We had a fab night with both excellent food and excellent company. A great laugh ?. We caught the last Dolmus home so got in late!

Thursday was back to cycling. This time twice round “The Peninsula”…which has sounded tough when people talk about it. I haven’t even done it once!

It is close, so a short easy cycle to ride to the far side of the bay from Calis then….. “undulating”. The climb from Karagozler to Help Beach Bar wasn’t as bad as I thought. After that we had some superb views… and a fair bit of descent then climbing. I am heavier than I was in June and not nearly as fit. It was doable but there were a couple of bits I was really glad they weren’t any steeper or longer!

Friday was yoga on the beach with Egle. We also did a beach clean-up before grabbing a coffee. The clean-up felt good.

Saturday was Bootcamp. This was our first one since June!. The forecast was for thunderstorms and the skies were leaden. They are made of tough stuff so the Bootcamp wasn’t cancelled. We did the first circuit then light rain came on, …..then heavier,…… then torrential!.

Where we had been doing press-ups and burpees a few minutes ago was now deep enough to do the front-crawl! Play was abandoned

There was flooding in Fethiye and the obligatory wet-weather car crash (not us!) on the hill up to Ovacik. Nobody was hurt. A couple of hours later the sun was out!

Sunday started with a quick shot in Dave’s “sit on” Kayak at Calis. At the start of the year I asked on Facebook if anyone in the area did Stand Up Paddling. I didn’t get much response, but many people said they wanted to kayak. Dave already had kayaks, so started a Facebook group and figured out how and where to buy similar kayaks in Turkey for a reasonable price. There are now almost 20 kayaks in the group and more are appearing.

Tne group go out on regular voyages and are planning their first camping overnighter.

A few of us tried Dave’s kayak to see if we liked it. I knew I would like it as we paddled in similar kayaks on the Tay in March!. The question was more, did we have enough time to fit in kayaking as well as everything else!

The head said no, the heart said “life isn’t a rehearsal” ….. Two kayaks requested from Dave’s source !. Need to make more room for these additional toys !

The Calis Walkers ramble was at Inlice. You drive through it on the way from Dalaman to Fethiye. It has always looked like a well-kept , fertile stretch with lush growth…but we have never explored there. The walk started from near the main road (the D400) , past healthy crops (beans etc), an open paddock area with cows grazing and onto a nice little bay. Back through the forest then along the small river. A really nice spot worth spending more time in.

After the walk and lunch, we went to the Kayakoy Festival in the afternoon with Egle. They had to cancel all of the music yesterday because of the torrential rain, but the weather was lovely on the Sunday.

There were stalls with food, crafts and art etc. There were band and singers on a stage but we arrived as one lot stopped and the other lot didn’t get going until after we left !

We bought home-made marmalade and mango chutney and a fish made up of upcycled glass bottles and driftwood. We all enjoyed mulberry sorbet in a cone made with fresh fruit. The coffee at Izelea wasn’t too bad either 🙂