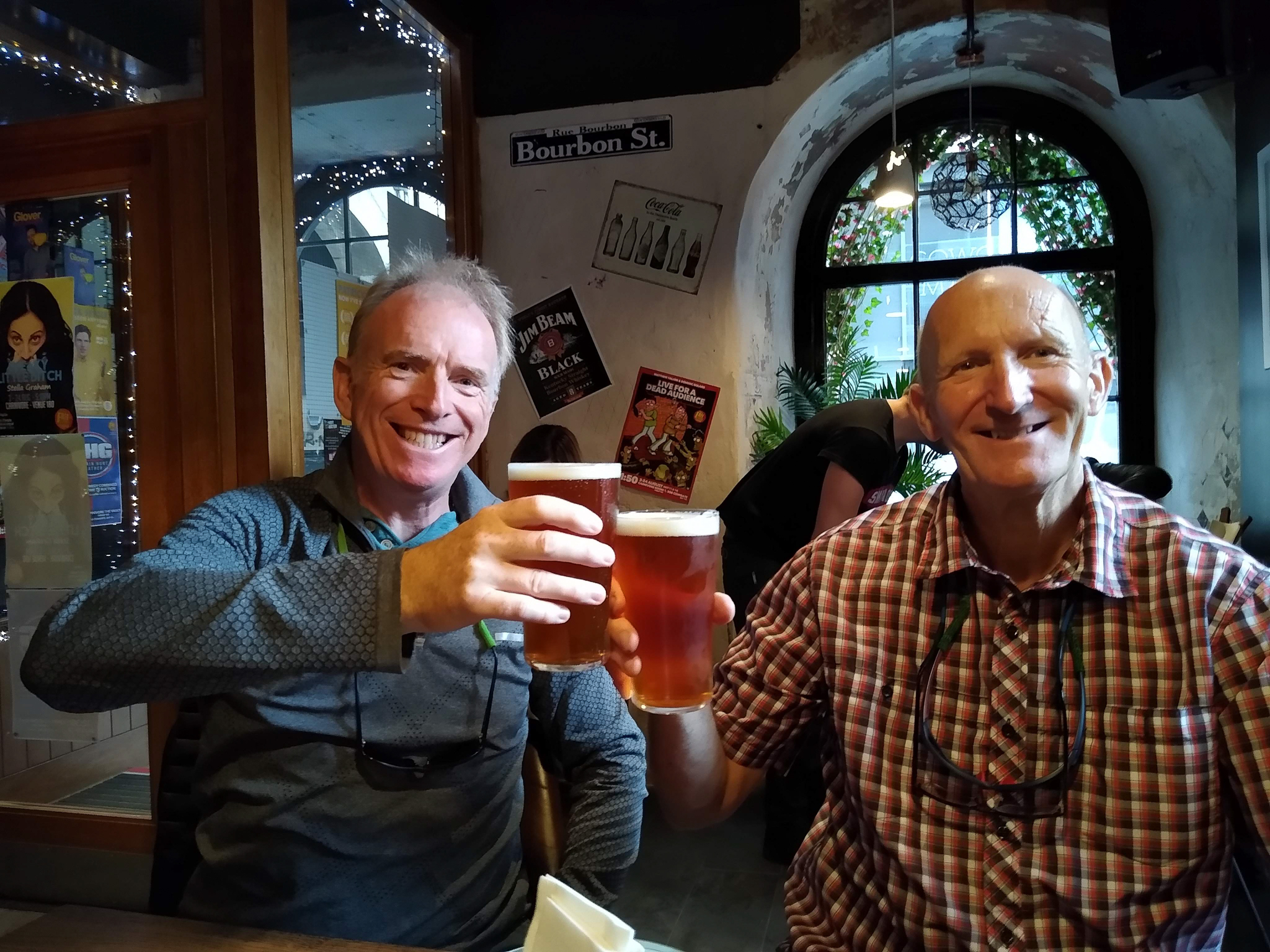 We all had a good nights sleep (well I did !)

Kenny & Mo headed off for the Edinburgh Parkrun while we headed up into town. It was a nice morning. A good time to appreciate the architecture as we walked up Broughton Street with views to Calton Hill and the assorted distinctive buildings on top.

Aileen and I stopped for breakfast. Very Edinburgh … Fresh artisan rolls. Mine had chicken, bacon, avocado and lime, Aileen had salmon and cheese. We shared a pastel de nata (Portuguese mini-custard pastry). It was very good…. but £2.20 for a tiny pastry? £16 the lot including a couple of (good) coffees

Our first show was in the old Scotsman Building. It’s an iconic building on the North Bridge which was the home of The Scotsman. A broadsheet Scottish paper which used to be printed there. It began as a radical liberal political paper in 1817 on the High Street before moving to Cockburn Street, then finally its new home on North Bridge in 1904. Its printworks below it in Market Street right next door to Waverly Station.

Anyhoo we went to see a comedian at 10:30 A Comedy Brunch 3. It was a small room but he had a decent audience. It was very much “Fringe”. A 29 year old who was computer programmer by day and comedian by night. Nerdy, geeky with anxieties and who joked about people thinking he has Aspergers ….he may well have. He will never be a star but we enjoyed the show for what it was. His set start and end was a mathematical routine on how stressful choosing a Subway Sandwich was, with all the combinations …some 21 million combinations of fillings, bread, sauces and cheeses!

He was clearly grateful for his “big” audience. He reckoned doing The Fringe would cost him about £4,000. Many don’t do it for a profit!

We wandered onto the High Street and popped into The Mitre for a refreshment, an old haunt of mine. Pleasantly empty at 11:45 ….but we were on a schedule!

The next show was in Tne Rowantree Pub on the Cowgate, “The Caves” Fringe venue. The old-town is on two levels. The High Stree (Royal Mile) and “The Bridges” (The North Bridge , South Bridge and George IV Bridge) are on the top level with Market Street, Victoria Street, the Grassmarket & Cowgate below it.

The Vaults under the South Bridge were created as part of the bridge building in 1788. From Wikipedia “For around 30 years, the vaults were used to house taverns, workshops for cobblers and other tradesmen, as well as storage space for said merchants. In later years, the vaults were a hotspot for the homeless and for criminal activity such as illegal gambling taverns, illegal whisky distilery and, according to rumour, bodysnatchers stored corpses there overnight. There is however no proof that the serial killers Burke and Hare ever used the vaults. As the conditions in the vaults deteriorated, mainly because of damp and poor air quality, the businesses left in the 1820s and the very poorest of Edinburgh’s citizens moved in, though by around 1860, even they are believed to have left too. That people had lived there was only discovered in 1985 during an excavation when middens were found containing toys, medicine bottles, plates, and other signs of human habitation.”

As you went into the venue you knew why it was called “The Caves”. You felt in the bowels of the earth in a very old building with old brick and stone arches.

The act was a comedian/storyteller Vanessa Hammick. It wasn’t the worst show we have seen ….but it wasn’t the best. A lame wander round the audience chatting and hoping for some comedy gold. The set was a bit disjointed with a vague point about health and cycling. She wasn’t an expert in delivery … or comic timing …. or material!

Our next show was up at The Gilded Balloon, Teviot Row House. We met Kenny & Moira outside after their Parkrun, showers and breakfast. The show at 13:30 was Jon Culshaw and Bill Dare: The Great British Take Off. It was a big queue for the 360 seater Debating Hall!….and we were still on a schedule! Most of the venues have multiple rooms/halls in the same venue and generally, there are a lot of staff keeping everyone organised, starting queues, splitting queues to allow access etc. and this was no exception.

The show was a “safe” show as we know what Jon Culshaw does. It was “unscripted”, done in a “chat” setting where Bill Dare asked Jon for reminiscences or anecdotes… but it was to a format. Bill Dare gave Jon his TV break on Spitting Image then later on Dead Ringers. There were some funny stories and fab impressions, It was a good show.

In theory, we had 15 minutes to get from this show to our next show. In practice, we were already late for it before we left!. Fortunately, it was only a few minutes walk away.

We were going to see Thunderstruck. They let us in “late” and like many venues (if they can) they admit you to a separate area. The main audience was downstairs but we were in the balcony …which was fine as it was still close and we had a great view.

The performance had only just started so we didn’t miss too much (we think!)

The “stage aside” here is deciding what to see at the Fringe is hard as there is so much choice (maybe 2,500 shows per day). The printed program is a “volume”, the posters all look great and flyers are pressed into your hands on all sides plus more when you go to a show, plus performers enticing you in…plus all this instantly available on the App. We have a had a bit more practice than Neil & Carol did (they were newbies) and Kenny and Mo hadn’t been for ages. It is a fair bit of work trying to plan shows so the times and locations fit together …and pick ones which are worth seeing!… then figure out where you can get something decent to eat quickly…when everywhere is full. I also try and look at independent reviews rather than the performer’s sales blurb.

The advantage of me doing it is I enjoy it, and it lets me influence the choices 🙂

I fancied Thunderstruck after reading the reviews plus the subject matter. It was Theatre (new writing,music). From the program ” The tragic and comic tale of the greatest bagpiper who ever lived. Fresh from sell-out previews at Celtic Connections and Piping Live!, a one-man emotional rollercoaster exploring how the traditions of bagpipe music were rocked by Perthshire bin man Gordon Duncan, and how he changed the life of one young piper from Fife forever. “

I was aware of Gordon Duncan who was a piper who broke the rules and made some amazing music, now copied by many.

The writer/actor/narrator was the young piper who’s life was changed after an encounter with Gordon Duncan . The story was of him growing up in the hard-drinking, bullying environment of a Pipe Band. They went onto some success winning the World Championship for their Youth category., and how seeing a drunk Gordon Duncan playing in a bar in France changed him.

It was well written and brilliantly performed. Funny and tragic. Gordon Duncan committed suicide at 41 after a struggle with alcoholism. He finished with “Thunderstruck” (from AC DC) played on the pipes, the interpretation Gordon Duncan unleashed on the world. I guess this was a pre-cursor to the Red Hot Chilli Pipers set. We all really appreciated the show ..(“enjoyed” is the wrong adjective for tragic tale)

Next stop was the Voodo Rooms near Princes Street to see An Evening Without Kate Bush. It was a free show but I had fancied it last week and Kenny’s friend had recommended it. The street was heaving with queuing people for assorted shows. Unusually there didn’t seem to be any Fringe staff there sorting out the queues.

Anyhoo we got in …just. A medium-sized room full to the gunnels.

This turned out to be one of our favourite shows by a long way. We later found our Sarah-Louise Young has a history of similar shows such as parody shows with Edith Piaf and Liza Minnelli in “Cabaret Whore” and her homage to Julie Andrews in Julie Madley Deeply.

Right from the get-go she engaged with the audience from the back of the room with her intro of herself … an that it was an evening “without” Kate Bush. A great Kate Bush costume and almost immediately getting the audience to howl like dogs before launching into Hounds Of Love. She has a great Kate-Bush like voice and moved just like her, parodying the videos.

It was pitched just right for both Kate Bush “superfans”, passing interests and non-believers 🙂

Part tribute and part tongue-in-cheek send-up, but all done with “Love of the Bush”

It was a free show but I left more money than I paid for any of my “bought tickets”. It was worth every penny.

Things were going critical by this stage!. Moira needed fed before she got “hangry”!. We headed back towards the Southside but diverted onto the High Street for grub. The Mitre was mobbed as were the next two. We headed down to the Cowgate to maybe head up to Bristo Square / George Square for “street food” if we got desperate. I spotted there was a free table in Carnivore so we grabbed it!. It was a trendy pub with cool, loud music and a limited menu, but it was slickly run and well staffed.

Decent beer (Brewdog Elvis Juice on-tap). I had an excellent huge juicy chop, Aileen had a fancy burger (it should be at that price !), and Keny and Mo had fried chicken in a bun. Everybody enjoyed their grub and refreshment. The rain had started ….again…..so we were all grateful to get a seat inside and edible grub rather than be huddled under a tree with street-food!

Our next show was Clouds back up on the High Street. Moira picked this one and it had good reviews. It was Theatre (new writing, historical). A small venue but quite well attended. Set in 1913 and telling the story of Freddie’s (Winifred’s) battle to gain a flying license and compete in an air-race. It brings in class themes, throws in the odd curve-ball, and the Suffragette. movement.

Hands up I slept through a lot of it …. and we were in the front row within touching distance of the actors!. It wasn’t a reflection on the writing or the performance ….things had caught up with me!

It was only just after 10:00 PM when we came out. We had a half-hearted attempt to pick another show ….but ended up just walking back to the flat after a stop at the “Offie”!