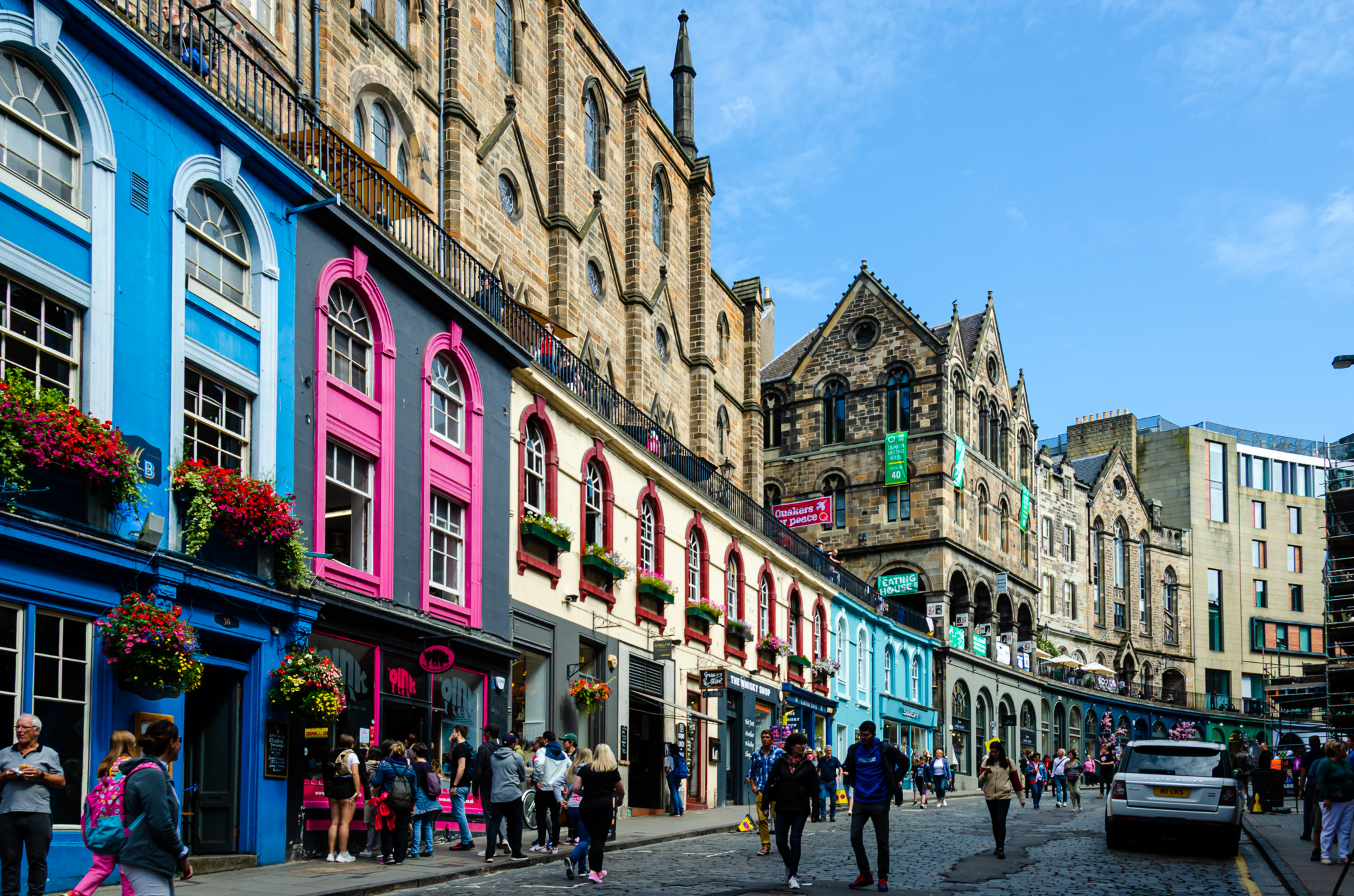 The good news the following day was the bed and bed-settee was comfy and we all slept well!. First stop was breakfast at a local cafe. Rolls or croissant, coffee and a bun”. It was a bit drizzly for a start but the forecast was good.

The plan was; Visit the Half Price Hut first, have a wander, then go and see Free Comedy at a venue on Hanover Street, and see what else we fancied booking.

The sun had come out by this stage so we had a wander along to Charlotte Street then back along George Street to see the free Funny Feckers Irish comedian comedy show. We had been told what to do. Go to the Hanover Tap pub and get a “token”. We were to go early as it is popular. Now “early” for most Festival shows is 10 minutes as things run pretty slickly on-time and you normally can’t get in until the last minute. We walked past the pub maybe 45 minutes before but never thought to ask for a token. We arrived 10 minutes “early” to be told the tokens had all gone, and they were full. Arse! Mind you we had a nice pint sitting in the sun in George Street and buying and collecting more tickets!

Plan B was a walk up to the High Street again to see what was happening, then a cut-down to the Cowgate then up to the Grassmarket. We went to the very busy “Oink”, on the picture-postcard Victoria Street for a Hog-Roast roll. That was tasty!. Moist pork with crackling and either sage stuffing or haggis and a choice of sauces (apple is best 🙂 ). Watching a street performer with a juicy bap in your hand in the middle of Victoria Street is what the Fringe is all about!

Next stop was the Edinburgh International Conference Centre on Morisson Street to see Friend. A one-man show performed by Brenden Murphy from the perspective of Gunther from the coffee shop (South Perk) in Friends and who suffered unrequited love (Rachel) and unrequited friendship (the rest of them!). It was well written and brilliantly performed.

We walked through the Meadows on our way to the Southside to see 007 Voices of Bond. The Meadows are so lush and green and growing like billy-oh. It’s clear we are not an arid country!. The Fringe Circus Hub in the middle of the Meadows looked splendid!

We cut through to George Square to visit the Udderbelly Tent. An upside-down purple cow-tent seating 405 people! Lots of drinks stalls and food vans surrounded the space. The adjoining George Square gardens were similar …. but without the purple cow!

We saw the Carol King production last year. The NighOwls company does a whole series of “story of” shows. Great singers and musicians with a bit of history / life-story narrative. The 007 Voices of Bond was of an equally high standard. In fact, it was the same singer Phoebe Katis with a 3 piece band as we saw last year doing the Carol King story. Powerful vocals and full of energy. I would happily go and see any of their productions. Aretha Franklin & Amy Winehouse is pencilled in!

We stopped at the Pear Tree pub on our way back to the EICC to enjoy their large beer garden, a refreshment, and to see who was playing on the stage. Anton (of Anton and the Colts) from Glasgow was taking the stage. An excellent singer in the Americana style.

We made the EICC with the normal (early) 10 minutes to spare …except this was a big venue for Cirque Berserk and we were are the back of the queue …especially after toilet stops!

This was the most full-on show I have seen anywhere!. A huge troupe of circus performers going at it 100% from start to finish. No lulls, no padding, no gaps or equipment changes between acts just action, action, action. As one performer was leaving the next was arriving ready for action!

Acrobatics, ariel acts, “clowns”, the see-saw act where acrobats are launched skywards and land safely, Bolas twirling, knife throwing, upside-down arrow firing with your feet, lots more and then the finale of five motorbikes swirling around the inside of an impossibley small cage. Mental !

A great show with maybe 30 or more performers.

We had 90 minutes before ou next show at George Street. Loads of time by Fringe standards!.

I had been pretty good at planning stuff, walking times, food stops up until now but hands up, I completely cocked this one up. I headed deliberately in the wrong direction back towards Tollcross to try a nice looking Korean restaurant we spotted (Ong Gie). We were lucky to get a table. We were pondering the complexities of the unfamiliar Korean menu when Carol said: “How long does it take us to get to the next show ?”. It was 20:10, the next show was 21:00 at George Streeet.We had a good 20 minute plus walk and we hadn’t even ordered, Shit !

Plan B. Get up and go and apologise profusely to the Korean owner who had been charming. He took it well!.

There was a street-food type Thai carry-out a few doors down with a few tables inside (Thailander … good pun!). It had looked good when we passed it earlier. My logic is the food would be quick and hopefully good… and we needed something now as we may not have time until very late. The Hog-Roast roll was a long time ago!

It was a nice wee place with good reviews and a lovely girl serving. The air was thick with hot-chilli smoke making everybody cough. The food did come out fast …. one at a time. Mine was both piping hot in an almost bubbling sauce, and chilli-hot!. Not a quick thing to eat!. It wasn’t a relaxing meal !

We didn’t have time to finish the food so we asked if they could put it in carry-out boxes. I had ordered “an Uber”to save some time, so we got to the Assembly Rooms in enough time to see Ed Byrne. Neil who had actually finished his meal as it wasn’t as “liquid! as ours so easier to eat, volunteered to look after the “cerry-oot”. He did a great job hiding it behind his legs to stop “Security” spotting it and confiscating it!.

Ed Byrne was good. We had seen him before. Good storytelling and a set which ended where it started with his link.

We had an hour before the last show we booked that day which was also in the Assembly Rooms ..so no need to travel. We managed to get 4 seats in the Courtyard right at the archway near the bar in full view of Security!. Carol who had least of all to eat as hers came out last, unleashed the cerry-oot and wielded the disposable chopsticks she picked up from Thailander.

Aileen and I followed suit. The food was still warm despite 90 minutes having passed since we were eating it in the restaurant. It was very tasty and nobody batted an eye!. In fact, I think a few folk wondered where we had gotten the Thai food!

Our last show was Best of Cabaret. ” late-night extravaganza of sultry songs, dance varieties, comedic displays and vivacious variety guaranteed to entertain at the prestigious Assembly Ballroom. Brought to you by the team behind Best of Burlesque”

It was “odd”!. Hosted by femme fatale Markee de Saw (Scottish with and American accent) who played the saw with a bow at the end as her party price , Magic performed by the host of Best of Burlesque Neil Kelso (he probably did a good job of appearing disquieting!), an octagenarian saucy-singer/comdeian Queenie (Lyne Ruth Miller) , “Mentalist” Ben Dali and two burlesque performers. Trixie Blue and Lily Lustre. An “experience” !

It was still dry but we wimped out and got a taxi home. It was after midnight by this stage 😉

We all slept well again but it was back to being miserable on Friday morning. Neil and Carol had to head home. We might have spent a day at the Fringe if the weather had been OK but the forecast was very very bad. We all got a taxi up to the bus station and got our respective buses.

It was a busy but enjoyable two days!