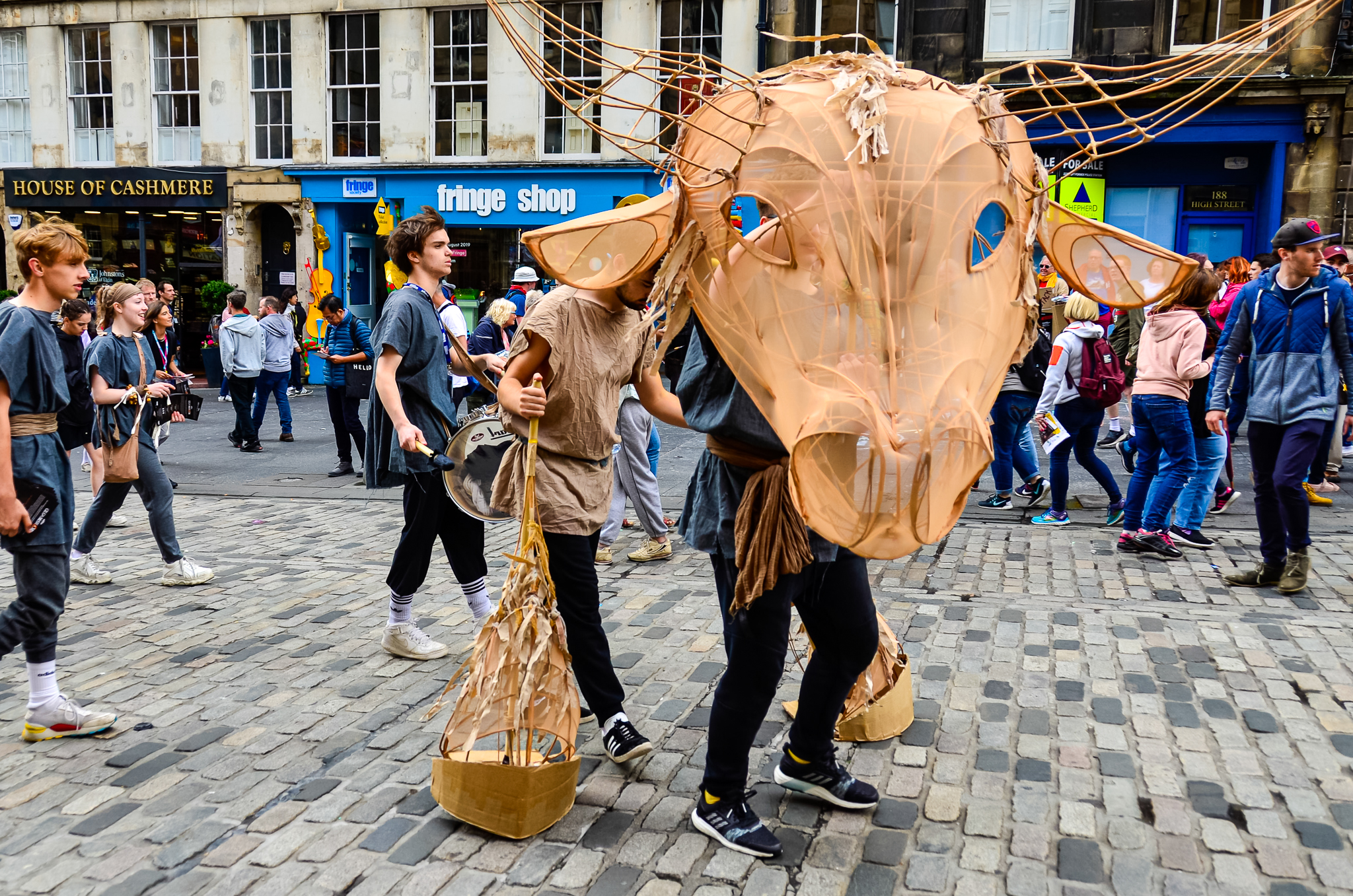 The Edinburgh Festival Fringe is the largest arts festival in the world. In 2018 spanned 25 days and featured more than 55,000 performances of 3,548 different shows in 317 venues (Wikipedia!).

That means every day there are about 2,500 shows! That makes choosing very difficult….

It evolved alongside the Edinburgh Festival in the 1940s to be more “Alternative” and didn’t require acts to be “invited”. The Edinburgh International Festival had more mainstream performances and continues alongside “The Fringe” to this day (The Fringe is a lot bigger now!)

There are also other Festivals taking place at the same time (Tne Arts Festivals, the Book Festival etc)

We enjoyed our visit (again) last year but were a bit cheesed-off discounting a lot of shows which were too late for our last bus or train to Perth. We decided to book an Appartement/Hotel, there and then for the following August. We booked 3 lots of 2 nights over the 3 weeks. We went for a 2 bedroom Apartment at Bonnington which is within walking distance from town.

It could sleep four if somebody didn’t mind sleeping on the bed-settee so we asked Carol & Neil if they fancied coming along as they had never been to the Fringe.

So how do you tackle the Fringe ?. About 2,500 shows every day of all types and a 450 odd page programme crammed with tight type-face!

The mobile App makes a big difference compared to the old days where you got a daily newspaper showing what was on that day. Now you can at least filter by distance from you, genre , time etc.

The shows vary from well-known acts in bigger venues (Frank Skinner, Ed Byrne etc etc) and International acts which are well-reviewed and supported before they arrive and so are “safer”, to unheard of “Free” acts performing ina small room down a grotty corridor. Some of then Free acts can be brilliant, some of the well-known acts can be a let-down.

Apart from the programmed stuff, there are buskers and street-performers some of which are fantastic, and also small stages on the streets for acts to do a quick “promo” turn. There are squares with street-food and bars and entertainment. You can spend many hours just wandering around without even going to a show….if the weather is kind !

As you wander around you have flyers pressed into your hand as the “acts” or friends pitch their show. There are posters everywhere with eye-catching pics and graphics and tag-lines. Some are plastered with the number of stars they have received from Reviews. We don’t normally pre-plan…we arrive and see what grabs us.

Comedy plays a big part in the Fringe but we like to see other stuff. There is Music (all styles), dance, poetry, spoken word, theatre, opera, circus etc etc. We like to mix it up.

We bought a “Close Friend of the Fringe” membership which lets us buy tickets for 4 people for up to 25 shows “2 for 1” for qualifying shows. This has turned out to be great value for our first visit at least. Possibly at weekends or later in the Fringe, there may be less shows doing 2 for 1, we will see.

Our strategy is roughly;
Go to the Virgin Half Price Ticket Hut around 10:00 and see what they have. You only know what they have that morning and you have to buy them at the Hut on The Mound (not online)

That’s our starting point. From there we have a wander, check-out the flyers and posters then use the App to see what is starting close to where we want to be next. If the weather is good we will more time wandering around outside. If not so good we will spend more time in shows …or if we see shows we particularly fancy!

The ticketing system is superb. Book the tickets on the App, then go to one of the many ticket booths, slide your card into a reader and it spits out your tickets. No entering reference numbers and very rarely any queues as it is so fast.

We met Carol and Neil at “The Hut” After a minimal pow-wow we bought tickets for The Black Blues Brothers (16:30) and Seann Walsh (of “Strictly” fame!) (20:30). That left us plenty of time to wander about in the fine morning / early afternoon and see what we happening on the High Street.

We watched all of the show from an excellent street performer. Balancing on a ladder and juggling knives was the main “thrust” (pardon the pun!) but it’s all really about the patter and the interaction with the crowd, he was good! Lots of people put money in his “hat” at the end rather than drifting away ….he even had a card-reader if anyone wanted to pay him by plastic!

As we headed towards the castle the skies darkened so we decided to get inside before the heavens opened ….then everyone would head for shelter!. We went into the Jolly Judge (an old haunt of ours) for a refreshment. True to form the heavens opened … then impressive thunder and lightning.

We had to leave for The Black Blues Brothers at the Assembly Rooms, George Street while the rain was still hammering down. The roads were rivers and the steps were waterfalls! We were all dressed for rain but you still get wet when the rain-volume is that heavy.

We thought it was going to be a music show but it turned out to be an acrobatic show themed around Blues Brothers music. It was amazing !. The routine where they had a big skipping rope “cawed” by two people, then took turns to do flips, press-ups , handstands etc as the rope passed under them …or were skipping with a single rope as well as skipping under the big rope.

We booked tickets for “Absurdist” David Tieck from Australia. The walk from George Street to the Grassmarket was Biblical!. The rain continued to be torrential. The roads were bigger rivers. There were poor souls huddling beside railings waiting to go into Princes Street Gardens for their open-air concert, not to mention the poor sods who had paid a fortune to go to the Military Tatoo. The highlight as we walked up the steps to the High Street was the water literally running down the steps like a waterfall. My decision to wear my wet-weather Keen Sandals was spot on. They were going to get wet no matter what shoes you wore but at least mine dried quickly!

David Tieck: What would Bill Murray Do. It was an inexpensive show in a small (cheap) venue with maybe 35 seats. A large beardy Australian wearing DM’s, shorts and a pink tutu, waving manically at everybody until he got a wave back was the sign of things to come. I have seen much worse acts at the Fringe … but he wasn’t everyone’s cup of tea (in our party !)

We had a bit of time before Seann Walsh so we popped into the Namaste Kathmandu restaurant which we had used last year. We were probably lucky to get a table (its always a bit of a challenge to get a table in a decent restaurant within your schedule during the Fringe). The food was excellent.

Next stop the Pleasance Dome at Bristo Square to see Seann Walsh. Hs actually very good but it was a bit of an odd atmosphere/vibe. He launched straight into his “Strictly Come Dancing”, Katia “Kiss” scandal, and the ensuing vilification, hate, “Pap” harassment and front-page “stardom”….pushing Brexit off the Front Page for a week (he said)

He thought the audience was “quiet” and wasn’t reacting as vocally as he expected and/or wasn’t giving the reactions he expected. He had a bit of a chunter about a “Wednesday” crowd. He was pleased he had such a big audience until he realised it was “2 for 1” which “explained” the audience size. He had some banter with a guy who yawned and gave a couple of women some stick for being stony-faced.

It was a funny set but the premise was a bit “poor me”, “I screw everything up”, my career was taking off then the “scandal” put back beyond square one. He did give an interesting insight into how the Industry works and how TV Programmes are made … and canned (Would I Lie To You, Mock The Week, Argumental etc).

We booked a 22:00 show at the Gilded Baloon on Bristo Square. Holly Morgan: Is a Witch. Get her.!. Holly and her husband were excellent. A small room pretty well filled, The premise was she had been a weird child so her parents had sent her to a Private School to “protect/nurture” her. A school-mate had called her a manipulative Witch. The show was looking at the history of Witches (female persecution) moving onto Trump and his “Witch Hunt” “dog whistle”.

The premise was a bit tenuous and disjointed but the performance was ace. Holly is a fantastic singer but also a fantastic singing impressionist. Stevie Nicks, Kate Bush, Lady Gaga etc etc.

It was dry by this stage so we walked 30 minutes or so back to the flat. We all needed our beds!