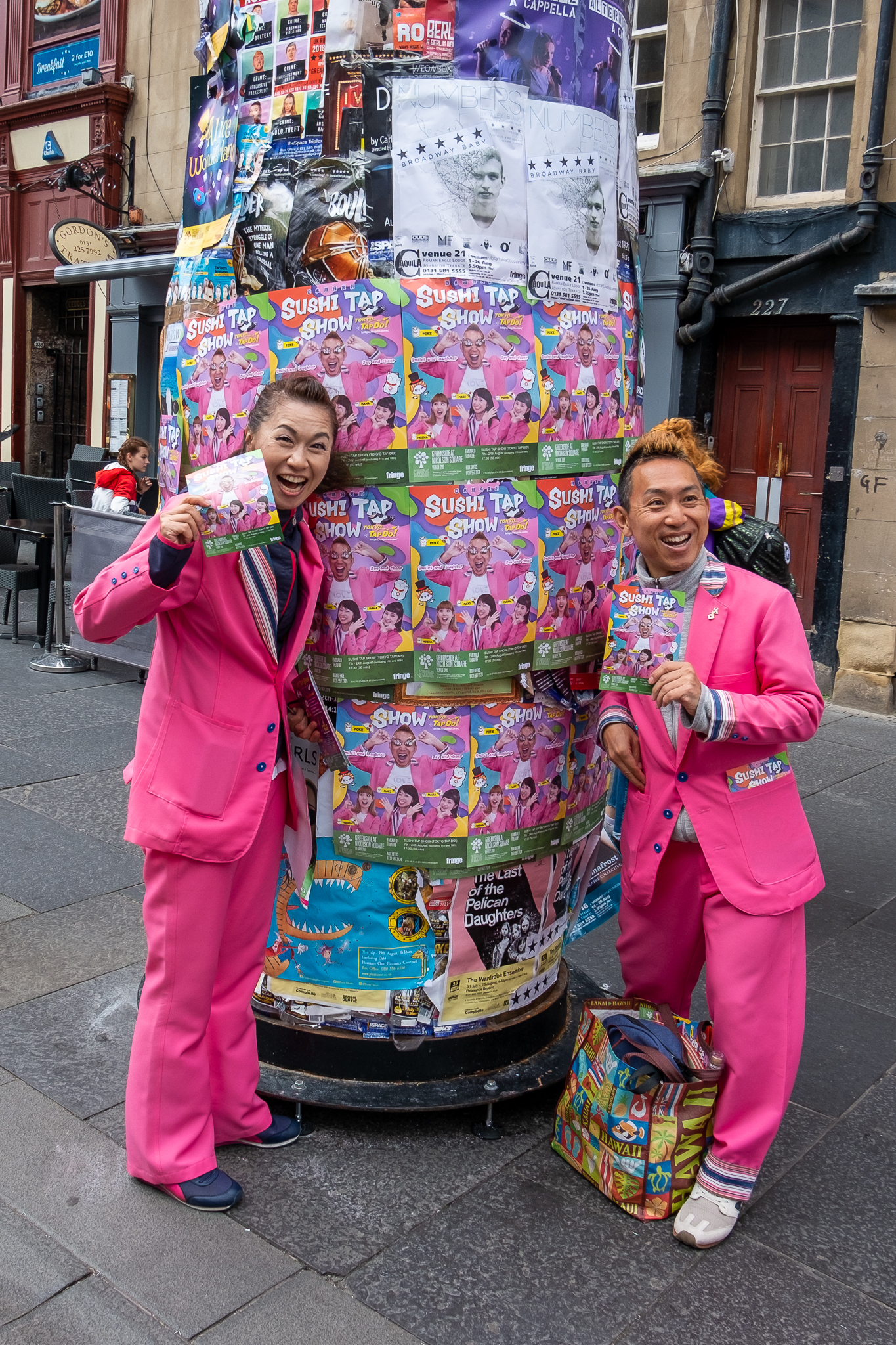 We had another couple of nights in a flat (apartment) in Broughton Road, Edinburgh this weekend. Kenny & Moira joined us….they had the joy of the bed-settee!

We bussed it down from Scone and had a wander around and collected tickets for the Fringe shows we had already booked. We met Kenny & Moira at the Assembly Rooms. They had driven up from Tring and had a few days at Loch Tay before the 2 nights at The Fringe , then home.

It was dry but windy. There was a canopy over some tables and chairs outside the Assembly Rooms. As the wind whipped up, a support for the open-sided tent clattered down nearly hitting a group of people. It was solid and heavy and lucky it didn’t crown someone.

Our first show was nearby. “And They Played Shang-A-Lang ” by Edinburgh Little Theatre. It was a play written by the narrator and actor about his school days in 1970’s Edinburgh. It was a young cast who were really excellent. It had some funny dialogue, a bit of song and dance, some good 70’s tunes and a primary school nativity play re-enactment. A great start to the weekend

We wandered up to the High Street to see the street acts, buskers and “taster” adverts performed on the wee stages . We then wandered down to the Cowgate and into The Three Sisters courtyard / pub.

They had a free comedy show ” Funny Cluckers: Best of the Fest”. The three acts were pretty decent and the MC was entertaining too. A New Yorker with mild cerebral palsy, Spring Day who was my favourite of the three. Rod Shepherd a “conspiracy theory” comedian (Kenny’s favourite) and Mickey Sharma.

Kenny & Moira started up a friendship with random bar-hoverers as they left. I didn’t quite tap my watch …..:-). A tight timetable is always part of the Fringe ….well it is mine !

Onwards and upwards to the Assembly Hall half-way up The Mound. As we came down the steps from the High Street we met a queue…..our queue

We were going to see Blizzard by FLIP Fabrique from Canada. Billed as “Dance, Physical Theatre and Circus (circus, acrobatics)”, and regular Fringe visitors with well-reviewed shows, it was clearly popular.

We sat close to the stage but at the side. That was ok as it was a semi-circular stage. It was a hugely impressive famly show.

The setting was a very cold / snowy / blizzardy Canada. A bit of humour a bit of clowning and impressive acrobatics and dance and a piano player centre stage who provided the soundtrack (along with a guitar, electronic keyboard etc he pulled out of drawers in the piano). A huge cube skeleton was the main prop which they moved, turned, up-ended, spun on it’s corner , filled with smoke etc etc. Tumbeling, juggeling, flips, spins, drops, hoops, trampoline tricks flirting with the low height of the ceiling and lighting rigs. It was hugely enjoyable and impressive.

It was time for Kenny to move the car from the Q Car Park and find parking near the flat, which was free from 17:30 on Friday until Monday morning. He managed to to get a space opposite the flat. Result!.

We pondered where to eat as the centre of town is always busy at any eatery during The Fringe. At the flat, we weren’t far from our favourite Chinese Restaurant from years gone by, the Loon Fung. We were lucky to get a table. We went for their special banquet.

The food was brilliant ..but too much food…we managed though!

We walked back into town to see “Art of Believing – Flamenco “. It was more of a guitar recital with some Flamenco dance. We know the company as we have seen them before and they are excellent. Daniel Martinez is the young guitarist from Cordoba who lives in Edinburgh as do several other of the Spaniards in the company.

Again a very impressive performance with three guitars, 2 singers a dancer and a violinist. This was only part of the full show which is already selling well for Glasgow Concert Hall next February,

As we came out of the venue the rain started …then turned into a monsoon. The streets were filling up with water as the drains couldn’t carry it away quickly enough. We decided to call it a day and resorted to Uber to get us back to the flat.

Because of the weather and the road chaos, we had to wait about 20 minutes. I saw the car approaching on the map, but a car-load of cheeky gits had already jumped in before I got there in an attempt to hijack our taxi! Thankfully they sheepishly clambered out when they realise they had been rumbled!