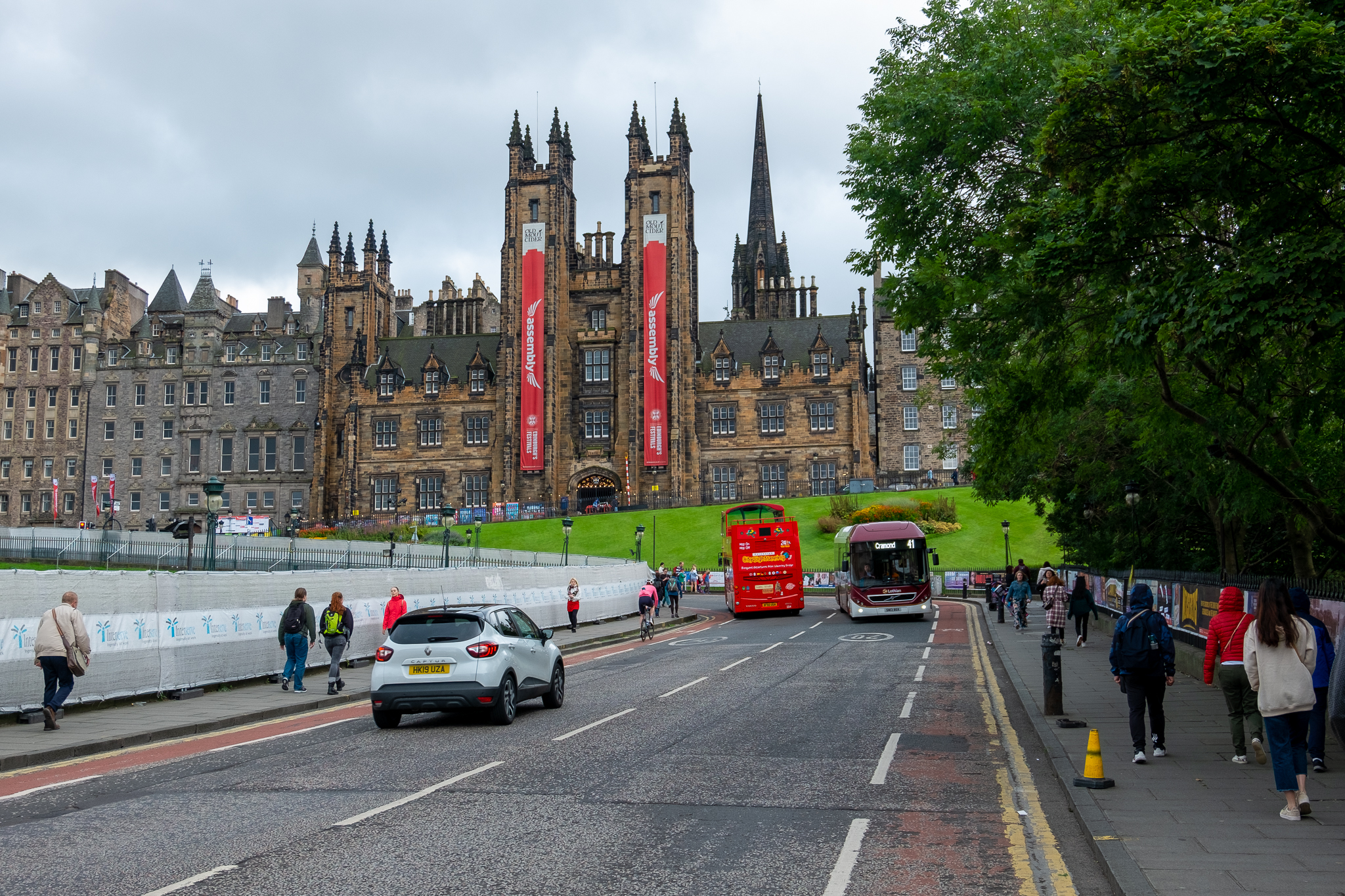 It was a “two nighter” but that gave us 3 days of shows, The previous week with Carol and Neil was a wash-out on the last morning, as the weather was horrendous all day, so we cut our losses, but it was a lovely sunny morning today.

We had lunch booked at 12:00 at Michael Neave just off the High Street, so Kenny & Moira could head south early, after lunch.

We had a look for any shows we could see before lunch. Most were kids shows, and one we had seen yesterday, but there was Heroin(e) for breakfast at the Pleasance Dome. It was “Theatre (physical theatre, drama)” and the time and location was fine. The reviews looked good. The poster was Marilyn Monroe with dosh and a syringe!

It was a small lecture theatre in the University Building. We sat at the front. As we filtered in one of the cast was slumped on the sofa watching “rubbish TV”

The lights went down, the action started. A “Benny Hill” type, graphic sex-scene/ chase to music with no dialogue started the piece. What the heck was this ?! …. at 10:30 AM!

The plot began to unfold. “Tommy” owned the Flat by virtue of an inheritance from his mother. He shared the flat with a disapproving/disdainful female flatmate Chloe, and his new much younger girlfriend Edie (still at school / “6th Form”). Edie and Chloe disliked each other.

Tommy was making a list of things to buy for breakfast…..Heroin was at the end of the list…..

The plot gradually unfolded….The Heroin(e) arrived portrayed as a big, brash Marilyn Monroe the Heroin “seductress”. Tommy was euphoric, craving a hit. Chloe had been dragged down by heroin before and was resisting. Edie hadn’t experienced it before.

For their assorted reasons they all succumbed, A wild “dance with the devil” ensued, followed by the slump and withdrawal symptoms and dependence.

It transpired the older Tommy, who was a good footballer and clever back in the day, had charmed a young student Chloe, and drawn her into self-destructive drugs use and dependence on him as well as heroin. She now worked in a shop. It transpired much much later, that the young Edie was Chloe’s sister who also had been dragged into the mire.

Tommy celebrated himself as a self-appointed champion of “the ignored, neglected and abandoned” bewailing a snowflake generation of Ed Sheeran-loving arseholes, worried about the property ladder.

Early on he addressed the audience directly ….he knew we were there in our comfortable middle-class world.

The final scenes were Heroin(e) re-appearing as a Trump-clad Marilyn Monroe with a briefcase full of money. Chloe and Edie half went willingly / were half dragged for their final, fatal, Dracula-like last fix. They were appealing to the audience for help … both in tears and in desperation. The acting was superb and totally immersive. I had tears welling up.

The script and acting was clever and realistic. It had laughs and darkness …a lot of darkness. It challenged the audience and involved the audience. It didn’t give answers or solutions but perhaps gave a window into a world we don’t know.

We all left the theatre absolutely drained and hugely impressed by the actors and the Production. It is by miles the best piece of Theatre I have seen.

We made our way in a state of shock to Michale Neave for lunch….It did take as a while to re-calibrate from the emotions of the play, back to “our (comfortable) world” ….

Lunch was superb and “proper foodie”. More expensive on a Sunday but still only £11.95 for 2 quality courses (we all had 3 courses 🙂 )

We waved Kenny & Moira goodbye as they headed for the car to drive back to Tring.

We went on to see Para Handy: A Radio Play on Stage. It was OK. It just didn’t seem to flow or “join-up”.

We had another wander and watched musicians on Victoria Street. Many are amazing. We watched a German(?) bass player set up loops and rhythms with a keyboard and bass. Very electronicy :-). I liked him.

We then popped into the fantastic Bow Bar for a refreshment. A proper pup with a huge range of draft beers, a massive range of bottled beers and hundreds of whiskies.

Our final shows was Made in Spain 2. A very small room with an audience of 7 !. We quite enjoyed the show. It was like having a chat with Sonya. She was from Madrid but living in London. It was a “Tapas” of topics. She asked us to pick from a menu on what she was going to talk about next. Football, family, politics etc and the UK / Spanish attitudes.

Planning our last day made us realise why last year we decided to book overnight stays in Edinburgh. For a bus back to Perth 18:50 is the 2nd last bus which is too early with the last one being 23:00 which is too late (OK not “too late”, but you are committed). For the 18:50 bus the last show you can see would have to start about 17:00 = 17:30 at the latest which rules out an awful lot of stuff. The train times aren’t much better.

We had a fab weekend at The Fringe. We try and see a range of types of shows as it’s all too easy to for Comedy / Comedy / Comedy and I think we made a decent job of that.

Thanks, Kenny & Moira for your company. Time to book accommodation for next year!