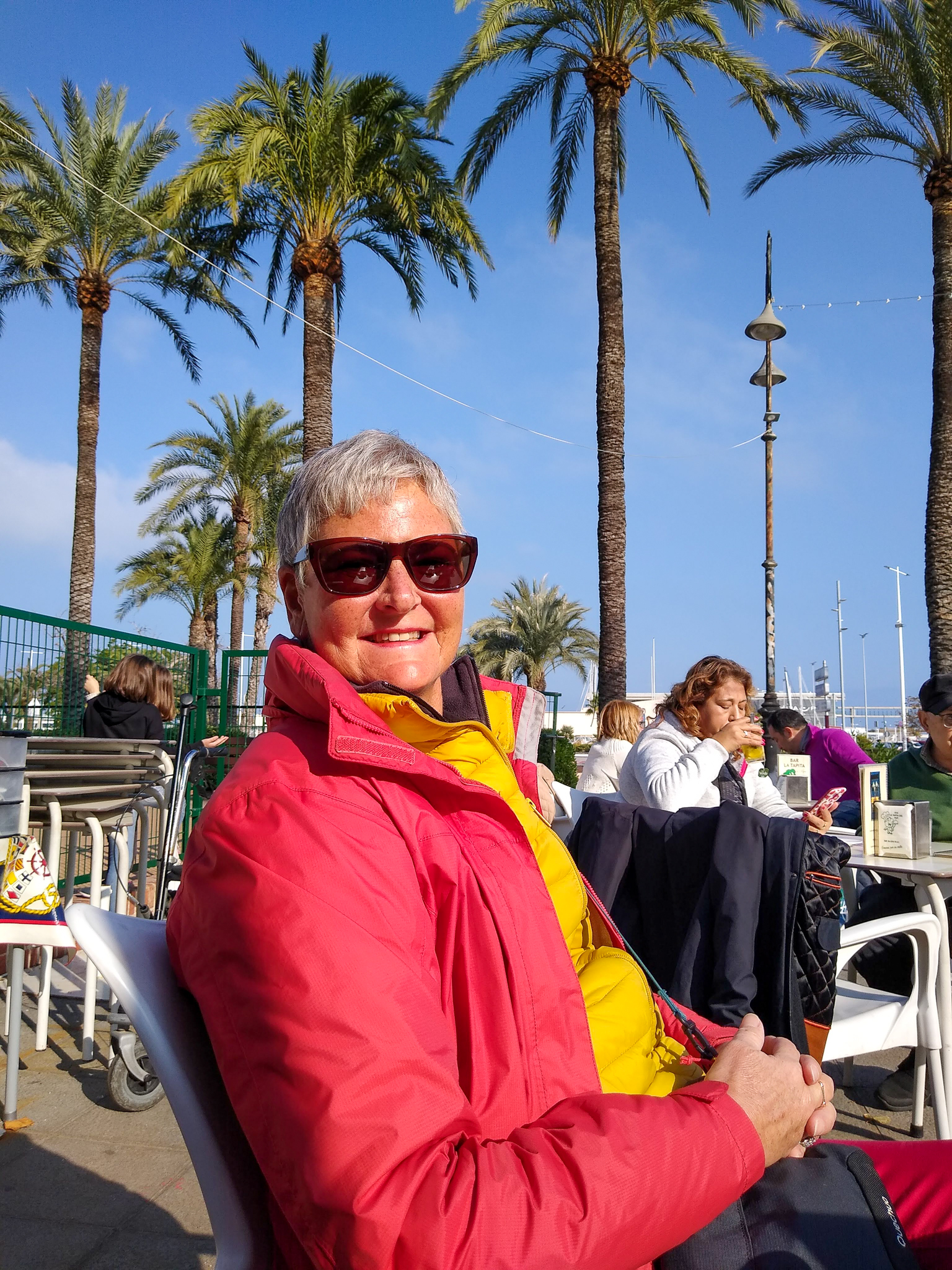 The fine weather continues. It would be nice if the shade temperature was as high as our first 10 days but it’s still hot in the sun and we haven’t seen rain since France on 14th December. Can’t complain!

Aileen is still crocked, so exploring on foot is a no-no. So much so we visited Paul the physio for Aileen, rather than me this time! An inflamed “meniscus” was the diagnosis (possibly a tear). No idea why it took a week to develop. No treatment other than let it get better. A supplement to help collagen was suggested and over-the-counter pain-killers if required…. bugger! Paul the physio is Dutch, and was recommended by Jane and Andy. We have been very impressed by him. He really knows his stuff.

We decided to head back to Denia by car which is only a 8km over the hill.

Denia old town is really growing on us. It was always “nice” from our first visit and the old town isn’t big. The more time we spend, the more we like the feel.

Lots of bars and restaurants, but we haven’t seen it in the evening yet. Places take on a completely different guise at night. We think for the better in Dénia, unlike some places in the UK which can turn unpleasant…..

I had to drop Aileen off in town then go and park to save her walking. I used the big car park near the Balaerics Ferry Terminal, so no problem parking!. I was amused to see a big flash Maseratti SUV with Czech plates occupied by three young, cool dudes. No doubt heading to Ibiza for the party scene (or at least that was the story I built in my head !)

A coffee was enjoyed in the sun at the square opposite the port. The guy serving was really welcoming, upbeat and friendly… To be fair that is the norm. Grumpy, unhelpful people here really is the exception. We almost had Tapas here but moved on in the interest of research!. We checked out Calle Loreto which is a lane with lots of Tapas bars…. but we were a bit too early…it was only 13:00!. Lunch starts late in Spain.

We took the short stroll to the Lonely Planet reviewed El Baret de Miguel. The reviews were fab but booking almost essential. We decided we weren’t in a “fine dining’ mood even if we got a table.

Despite the very short walk, Aileen’s knee was giving her real pain. That has really put the cat amongst the pigeons as “walking” is how we explore!

Anyhoo we walked (limped) back to Calle Loreto to pick a bar for simple tapas. The first one we tried looked nice from the outside and was way too trendy and ‘big meal” rather than tapas when we went inside. We made our escape!

Our next attempt looked more “local”, Bar Dianense. The bar was empty and we were unsure of it was open…. it was “early” at 13:30 after all!

There were a couple of people eating in the lounge. This was much more our type of place. A four-generation family business which the locals use. Pretty standard, traditional fare but done well and at a sensible cost. We started with Chupitos (baby squid)……. then we had a hiccup!

Service was going great, people were arriving and being served promptly. Food was coming out…. various paellas and assorted other goodies…. just not ours!

You don’t know when is the right time to “ask”. We “asked”!. Now we could have got pissed-off about being “dissed” by the staff…. but it really didn’t have that feel. Just a genuine cock-up.

Our prawns arrived, followed by chorizo on a bed of thinly sliced potato. It was all really good, and very “local”.

Even those three dishes was too much food! We were really pleased with our choice of bar.

Later in the week, we drove up to the windmills overlooking Javea. This date back to 14th – 18th century and milled wheat and other cereal.

Great for walking, cycling and trail-running but not easy to get the very low SAAB close to them to minimise the walk. Rough tracks, ruts and potholes aren’t SAAB Aero territory!

We went along to the lighthouse and did a bit of Bird-watching. There is a marine conservation area below the cliffs and the vegetation is protected to try and restore natural, native flora. That all has a positive impact on the variety of local wildlife.

We nipped back down into Javea to hit the Central (food) Market before it closed at 13:30…..vert confusing as many restaurants don’t open until 13:30!. In fact the market was serving food and in full swing WAY after 13:30. Go figure!

The gambitas frita were tasty but a bit of a faff to peel. In fact we weren’t sure how much was to be peeled and how much was to be “crunched”. The same debate when eating small fish between whitebait and small sardine size!. We fully peeled most of them!. A good way to slow down the scoffing rate!

So what do you do with someone who can’t walk very far? The end of the day was a visit to the outer breakwater for a coffee from our flask and a biscuit to bask in the dropping sun. Us oldies sure know how to live it up!