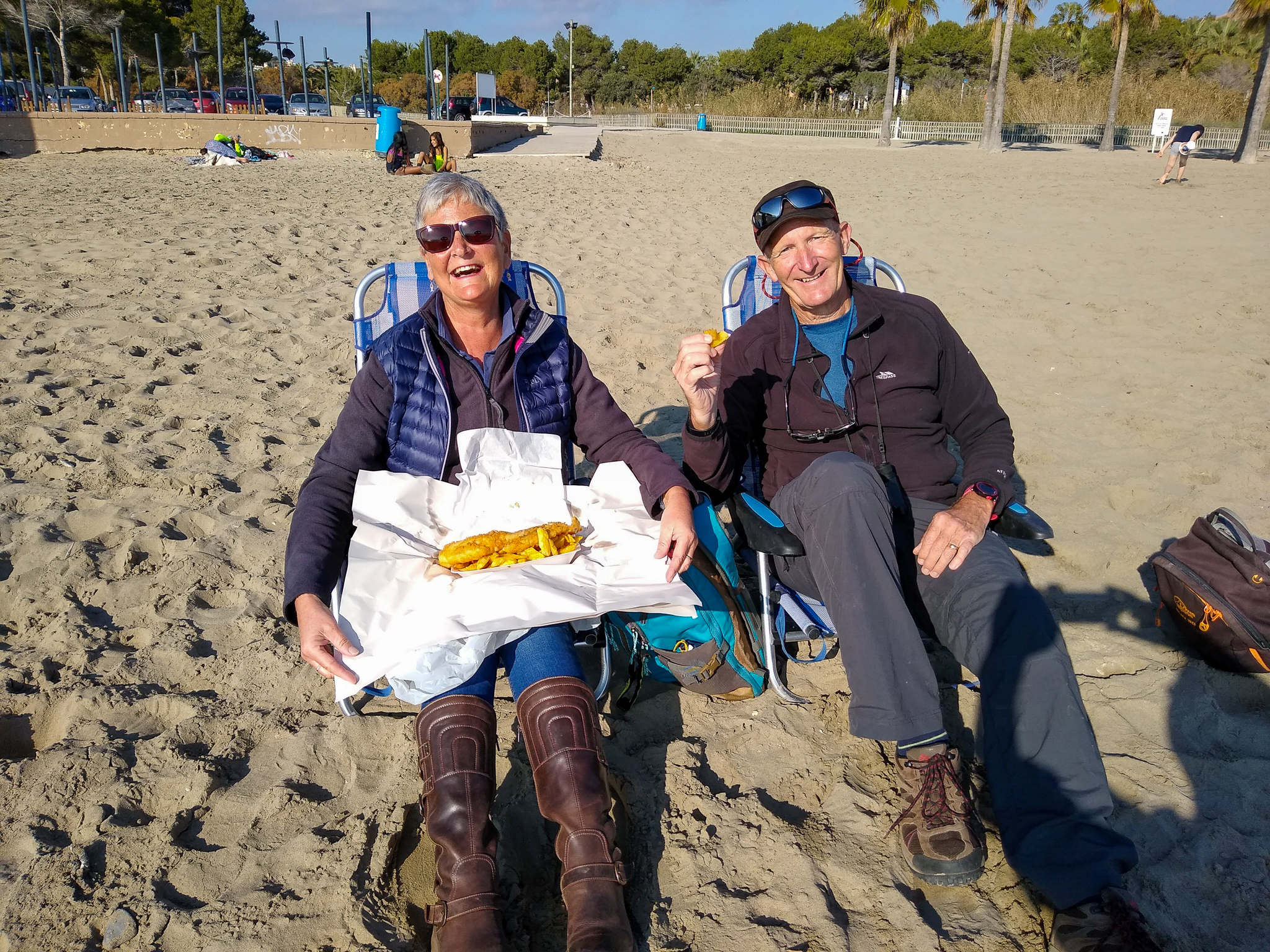 Some of this is a wee bit out of order as some of it was before El Hondo birdwatching. Just a few memory joggers for us in future 🙂

This is starting to feel like writing a lengthy, dull Postcard!. Who remembers writing those as part of your annual holiday to send to the Rellies ? 🙂

Driving continues to be fine here. No traffic jams, decent roads and all generally pleasant. The only “driving behaviour” which yanks my chain (and they all do it so it must be what they are taught or what they have learned), is lane positioning on roundabouts. On a two-lane carriageway entering a roundabout, cars which take the lane as if they were taking the first exit or the 2nd exit (straight ahead), often carry on right around the roundabout to take the third exit !. Very disconcerting if you are on the “outside” lane to go straight ahead!

On one of our morning wanders we saw the fishing boats head out. We saw what the large hoses hanging from gantries at the fish market were for. The boats came in one-by-one to load their holds and boxes with crushed ice. The hoses deliver the ice.

We have had three trips to the Cinema since arriving. Probably more often them the last several years in the UK! Knives Out was excellent, Spies in Disguise was a cartoon and really quite entertaining too, and 1917. Sobering… Oh and Aileen saw Little Women with a gang of “Ladies” !

We had another trip to Moraira …..armed with deck-chairs and a flask!. We headed for the beach-side this time. Like everywhere here the beaches are well maintained and raked. Pavements and proms swept and hosed daily by street-cleaners, bins jet-washed.

We saw a family eating fish and chips on the beach so we had to join in! “Fishy Fishy” did the honours with the choice of cod, haddock or hake. Not cheap but decent quality. Very “Brits abroad!” When we went back to the car there was a Spanish Reg SAAB convertible parked next to us. Someone else with taste 😉

It was after this day out following my morning jog my knee started playing up!. It was properly painful at night…..bugger!. Both Aileen and I walking wounded!

On longer “holidays”, Aileen eventually has to go for a haircut. I don’t have that problem as I take my own “shears” !, The local “Peluqueria” (hairdresser) obliged. Normal service was resumed!

We like Xabia a lot, but winter is quite different from summer. In summer people will be seeking shade. In winter they are seeking sun. The coastline is kinda east facing which means most of the bars and restaurants on the “front” get sun in the morning but lose it by lunchtime and in the afternoon/evening.

We found “Sunny’s” which is in an unconventional location. On a slope kinda “between” streets…..but it gets the sun until 15:30. Not perfect but longer than most!. It is named “Sunny’s” not because of the weather, but because it is owned by Sunny from India!. That also means the pakora and currys etc as well as tapas etc. This has been a great wee find 🙂

Spain is hugely important for wildlife in all sorts of ways. The mountains and plains for some species, the geographic location so close to Northern Africa providing a stepping stone for migrating species which aren’t great distance fliers (Raptors) , unlike terns, swallows etc which migrate many miles over land and oceans.

Raptors migrate in thousands near Gibraltar ….but only when the weather conditions are right. Even this very short sea crossing can be a challenge for some raptors which need thermals to soar rather than “wing-power” to cover the distance.

Wetlands and Salinas are hugely important also, for migration, wintering and breeding. These stretch along the south and east coast. Donana, Cadiz, La Janda , Valencia Albufera and many many more.

We discovered Pego Wetlands was pretty close to us, so we had an explore. Booted Eagles, a Marsh Harrier, Glossy Ibis etc were all present. More time needed to explore.

We spotted Jesus Pobre had a “Rural Market”. A small town close to Xabia on the side of Montgo.

It wasn’t your “regular” market and it was really charming. A stone built “agora” at the centre with stalls around it selling crafts and artisan products. Crisp, fresh vegetables, jams. cheese, cured meats, bread etc. Local Vineyards and local artisan beer (IPA and what beer). They sometimes have live music. On this day is was recorded but very cool sounds. There was a stall with seats where people could just pickup a book and sit and read, and others chairs scattered about under the trees for people just to sit and chat and enjoy the surroundings.

It wasn’t quite a “Hippy” vibe, but definitely a place to come and meet and socialise and buy local quality produce.

Our visit wasn’t a complete success, although we will forgive it. I was responsible for getting the beers and getting seats in the sun around large shared tables (tick). Aileen was delegated to get a hot local sausage sandwich and pork loin one. Much confusion and delay ensued! ……none of it Aileen’s fault!. She arrived ….eventually ….with nice, but “cold” hot sandwiches 😉 Better luck next time.

We went back to Pego marshes,but not much joy today. Managed to scrape the spoiler of the SAAB on the potholed tracks again. It didn’t rip the spoiler off ……..luckily!

The weather was still good so we headed into the mountains. This time up the valley from Pego towards Planes. WOW !. A great drive on quiet roads with fab views. More villages to explore when we have more time. We drove back via Guadalest which is an impressive castle on a rock pinnacle.

The roads back were a bit too good!. I loved them the constantly twisty turny roads, the SAAB tolerated them. Aileen survived most of the way back until her occasional “motion sickness” overtook her. We may think we look cool with the top-down carving through the passes…….less cool stopped in the middle of the road to vomit out the door !. The rest of the journey was more sedate and a switch to the straighter roads!

We tried a different route to walk the 20 odd minutes to the old town. Very quickly we were into orange tree “orchards” and passing Javea Camping. A very smart caravan/motorhome site which was very busy. A nice pool, and tennis courts etc.

Onwards and upwards along the river and across the old bridge. We were soon by the Church via a more interesting route. Probably longer, but it seemed shorter. A coffee was had at our favourite cafe in the sun. We checked out a few eateries in town as we don’t know these in the old town as well as we should.

La Trastienda was a wine bar with seats in the sun. The menu sounded good and 6 tapas del dia for €9 (really 3 tapas with 3 small vegetable side-dishes but plenty of food). The wine was good, the tapas were great and beautifully presented, and the staff were lovely. What a great way to spend an afternoon.

Sotavent is a firm lunchtime favourite for us at the Port, then a simple tea (or no tea!). We thought it was a choice of three starters, then a choice of mains, a pudding and a drink for €15. It turns out you get all three starters !. The quality, tastes and presentation are first-rate.