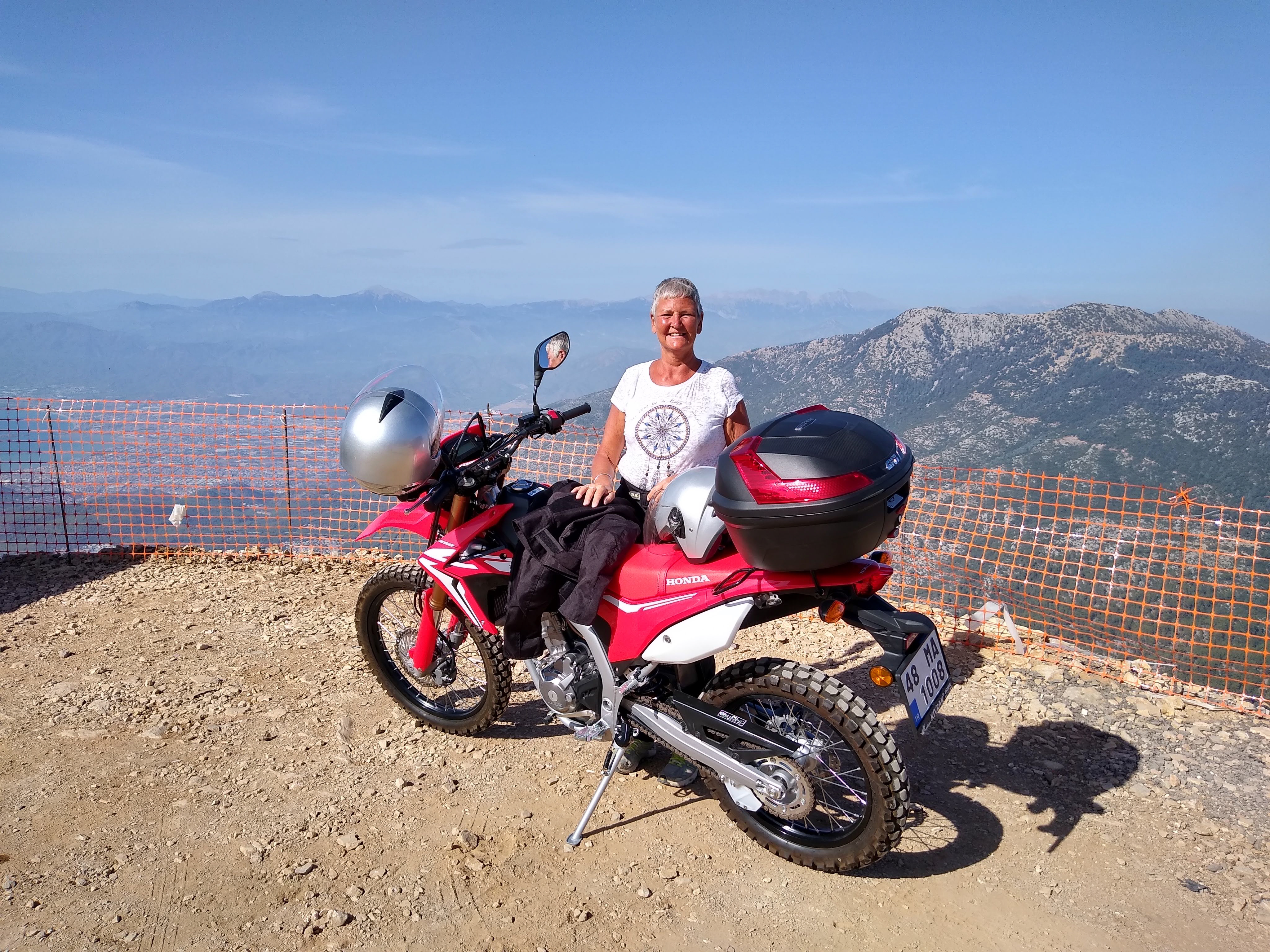 This is a diary for ourselves of the first week(ish)

It’s amazing how quickly you get back into a routine! The villa looked good and Mustafa has been keeping on top of the garden, but there is still kitchen cupboards to return to how they were organised when we left before guests were in the Villa etc.!

I had solar lights to try and repair, the garage to sort out as we had to fling stuff in at the last minute, wash the motorbike and the push-bike etc. etc.

Wednesday is Fethiye Ramblers day. We were really looking forward to it. It’s normally about a 4 hour walk including a picnic stop, and a fair bit of uphills. The crowd who do it are a great bunch.

The flies in the ointment were Aileen’s sore foot, her cold and my lack of activity since our peak of physical fitness when we left in June… ?. We bit the bullet and lived to tell the tale!

A walk from Yeşil Vadi (green valley) through the “Two Eggs” restaurant (that’s not what it’s called, but everywhere has a colloquial name. You get 2 eggs with your breakfast here), a walk past the trout farm, up a steep rocky forestry road, followed by a picnic at the river than back via a quiet tarmac road. Just over 11.2km (I forget to start my watch at the start!), just under 3 hours including a picnic and 394 meters climbed and about 27/28C.

On the way back I dropped the mountain bike in for a service. I took the wheels off so I could get it in the car rather than leave it on the car-rack when we were away for our walk. I put the wheels back on to take it into the shop. I couldn’t figure out why I couldn’t re-attach the chain, then I realised the bottom wheel of the derailleur had come loose!. The tiny nut holding the spindle had come off. That was a lucky escape it happened on its way in for a service, rather than halfway into a long cycle in the middle of nowhere!

Rob who planted the seed which led me to buy a motorbike here,…. (then the snowball-effect of building a garage to keep it along with the rest of our tools and toys), reminded me there was an Enduro event and beach motorcycle event in Kemer near Antalya next week. Another holiday within a holiday!

I sorted that out so we are now staying for 3 nights!. There are things I want to see in that area anyway so it won’t all be motorbikes!

We had a nice night out with neighbours Pat and Jes to Kukina in Fethiye. The Beef Carpaccio starter is fantastic and huge. Aileen and I had this as our main !

My leg has been kept dry since the end of June when I had my paragliding “mishap” (about 3 months now). Mostly showering with a bin-bag over my leg and trying to keep water away from the bin-bag. Latterly they gave me a fancy cling-film type dressing which I can shower with and theoretically swim, but I really don’t want to get it wet and infected again.

The paddleboards are winking at me and I am desperate to get out and try the new one. Freinds have kayaks and they want us to give them a shot too. I had a look at the wound last night (18th September) and that was the first time since the 26th June when I did it that it was fully scabbed over and there was no leakage on the dressing.

I think that is “progress”, so I really don’t want to set it back again so the swimming and watersports are still on hold ?

We got back to Yoga on the beach with Egle on Friday. We both enjoyed it and it was nice catching up with Egle. We had a coffee at Buzz afterwards which was where my Kayaking chums were assembling to set-off. The plan was for them to paddle to Cold Water Bay, have a BBQ then paddle back. I was well jell!

Friday night was the Oludeniz Hash House Harriers end of Summer Cruise. What a blast and what amazing value on an immaculate boat. The groups who organise meals and events do an amazing job negotiating deals for food and drinks etc.

We were picked up at the top of the road by a minibus and taken down to Fethiye. The boat was Grand Torman, all beautifully varnished wood and polished chrome with immaculate white upholstery. Dinner of fish or chicken was included and the drinks were very reasonable. John did the music from his laptop after having asked people earlier for their favourites.

The boat left the harbour abouyv18:00 and we got back to harbour about 01:30. The dancing started early! The highlights were Ann who was possessed by Shakira, Lesley and Chris having a dance-off with Alison and Linda, Oops Upside your head, YMCA…and of course “The Rollers” went down very well with Shang-a-lang and Rocking to the Music (Ann was a stalker in her school days ?)

The dancing was a bit of a rough-house at times. Jim was kicked in the Achilles and had to be stretchered off. I rustled up an ice-pack for him then went back to the action ?

It was a brilliant night with great laughs. All this for £20 each!

We had a trip to Köyceğiz on Saturday to see the traditional sport of Oil Wrestling but I’ll do a separate blog on that.

Sunday was an hour(ish) walk from Calis with the Calis Walkers followed by an nice lunch at The Nill Bar with a sizeable group. I was impressed by a group playing a few doors down. Two good acoustic guitarists and a female singer.

We had a lovely meal at Motif in Calis that night with Jacquie, Paul, Steve and Janet. We got there by Taxi to Fethiye then the water-taxi over to Calis. A lovely journey.

After the meal we stopped at the Motto bar we passed at lunchtime to see Baris-Tutku with Marta. We later discovered it was a proper live Music bar. Calis was really buzzy along the front with a really nice atmosphere. The restaurants and bars were very busy with holidaymakers. Motto was quietish but most of the customers were Turks, and the music being played by Baris-Tutku were playing modern Turkish music, and were very good. Marta (from the Ukraine) sang some well known English language songs with them in their next set (Moloko, Edd Shearen etc). It was really nice guitar arrangements with great bass-line. Marta had a good voice and a kinda Jazzy take.

The other troops left to get the last water-taxi back at 22:00. Aileen and I stayed on to see more of the band who finished at midnight. We had a chat with them at the end of the night. Marta doe a lot of singing in big top-end hotels and has only recently started working with Baris-Tutku so they don’t have a huge amount of material yet. The problem is the English language songs sung by Marta were great, but we also liked the Turkish material sang by the guys. For me, it would be good if they could keep a mix of both.

I decided to give the Paddleboards a go after yoga on Monday despite my leg. The dressing is meant to be able to allow me to swim, but one let in water in the shower a while ago, so I am treating that with caution!. Still, I can get on the board without getting it wet and I tend not to fall off if there are no big waves. It wall went to plan 🙂

We treated ourselves to the excellent fresh fish & chips at Paradise Beach before we went out. Aileen got on great on the board. Straight up on her feet and did a great circuit of the Lagoon. She made it look more comfortable than she was in June!. Aileen went back for a sunbathe and I carried on for a bit more exercise. I paddled 10km and picked up some plastic litter from the Lagoon. A good day.

The last chunk of this diary was Tuesday before heading off on a holiday within a holiday ….but more on that later…..

Tuesday is cycle day. I went out with Lekker Ding which is the step-up group from Easy Riders …..although they have had some monster rides as well! Today’s was fine and it let me ease back into it. I met some lovely new people as well so all was good. I did have a slight fly in the ointment loading up the car in the dark to get to Calis for 07:30. I left my rucksack in the villa which had my water, my wallet, passport, camera etc etc I survived.

I had modified the Honda to add a heat shield to the exhaust to keep some heat off Aileen’s heel. Off we popped to Baba Dag …the 1900m mountain behind us. It was a great run-up in nice, not too hot weather. The paragliding was super busy with tandems and organised club solos from all over the world. My heart was in my mouth at times for the inexperienced solos until they were airborne. A lot can go wrong…and did

We finished our day with a Thai meal at Sandinos, Just the job !