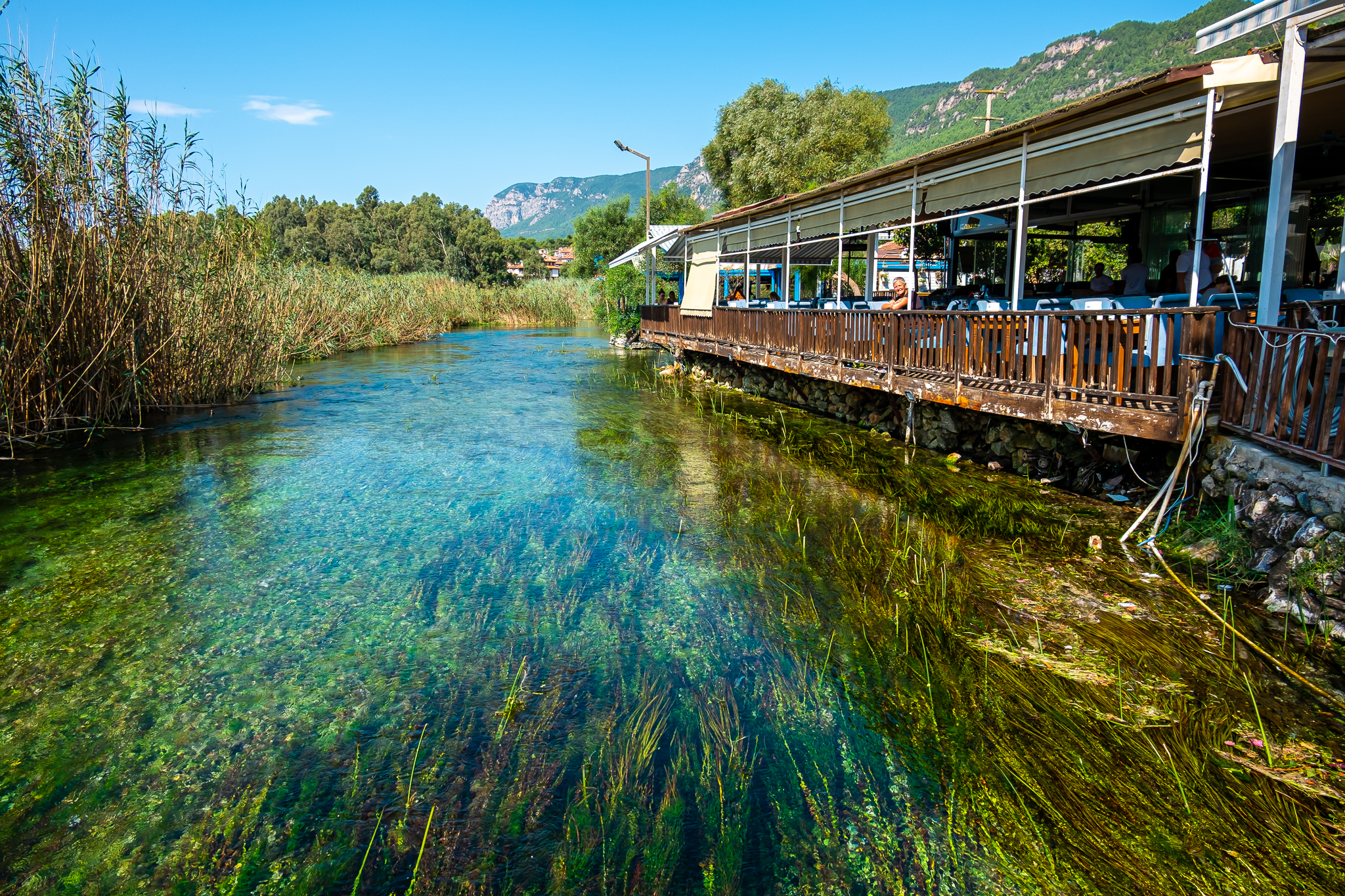 We had a comfortable sleep last night but we’re woken early by chatting outside.

I poked my head over the balcony to see a few bare-chested older guys sitting at the River-Bank. I assumed they were having an early morning çay (tea), but as the volume got louder with added bawling and drunken singing, Rakı appeared to be the culprit!. It was Saturday morning after all….

We messed around in no real rush, and left the room just before 10:00 to explore Akyaka on foot.

Our bedroom door was literally right next to the reception desk.  A two-man reception delegation pounced on us to escort us to breakfasts across the road by the river to Olta, (one of the highly recommended restaurants in the area)

It all became clear!  We asked Reception for recommended Akşam (evening) restaurants last night. This was one of them, but he also told us that was where to go for breakfast and even wrote it down.  That’s a bit presumptuous we thought!    We had totally forgotten breakfast was included in the room rate!

It was a good village breakfast to be fair and in a lovely spot over the crystal clear river.

Two of the drunks from the riverbank were there for breakfast (or Rakı!). One of them was unconscious. Another was unconscious at the side of the river. One went for a swim in the icy water…. then their car disappeared.. Scary!

We were still trying to decide what we think of Akyaka. We were charmed in 2006 after our one night stay (we think it was just 1 night).  It definitely feels more polished and busy than we remember.    Yesterday’s weather and our poor restaurant pick didn’t help fix a good 2nd impression….. and I’m ashamed to say, things like that can really set a tone which can be hard to shift.

We walked along the river into Akyaka. Lots of trees and shade and Turkish families setting up for their mega Saturday picnics. They don’t mess about here. They bring everything including the kitchen sink… and sofa, satellite TV and wooden picnic bench!

I don’t think we have walked to the bigger breakwater before where the larger tourist boats and larger fishing boats anchor. Lovely views back to the river, over to the beach, along the kite-surfing shore and out to the Gulf of Gokova

We carried on along the beach. Behind it were spaced out trees up the slope with pathways and concrete seats and picnic benches. Ideal for picnics in cool shade.

We turned at the swimming pier. This was where beach turned to rocky shoreline and the water was deep enough to swim. Everywhere else was really shallow. Knee-deep well out to sea.

We stopped at Trendy beach bar for a refreshment. It could have been the Buzz Bar DJ…. if it hadn’t been internet chill-out radio!

We went up into the older part. It’s very pretty with the Ottoman style houses draped with different coloured bougainvillaea. We couldn’t remember where we stayed in 2006… but it was close!

We circled back and thought about do in the riverboat trip… but we had just walked it so didn’t bother!. Instead, we crossed the bridge and headed to where the kitesurfers were.

Now this was different from our memory even in last October!. I guess the tide was in this time so there was virtuly no beach. Just a thin strip of reeds and scrub with a narrow overgrown path and the odd sun-bed to block the way. The taller reeds and wetland canals were behind.

Watching the few kitesurfers who came as far as us was great. One very cool guy with dreadlocks was going good-guns. We didn’t see what happened but next, we knew he was in the drink and his kite was trashed with a huge rip down the middle.

We walked as far as we could towards the clump of kitesurfers… until we hit a river we would have had to wade. I am still keeping the dressing on my leg dry so we had to about-turn. Wading the shallow river was perfectly doable for most.

We took a wrong turn going back and ended up in a deeper thicket. Aileen got even more lost and ended up where there was no path. We had a strop and I cut my leg on brambles, but we lived to tell the tale ?

It was back to base after a Magnum (fruits of the forest for me and cherry for Aileen). After pics and blog for me, and sunbathing on our grand balcony with River views for Aileen, we headed out to the multiple recommended Otla (where the Hotel sends us for our breakfast) for dinner.

We had read you need to book in these popular Riverside restaurants… I think we were lucky as we got a nice outside table… and it soon got a lot busier with people being turned away.

Lots of Turks clearly drive to Akyaka to eat, as they were dropping their cars at the restaurants, and let minions valet park them.

Fran the waiter (named after a powerful river in Mesopotamia) was excellent. Good English with a lovely manner. Informative and not at all pushy. He explained the options without arm-twisting you towards the most expensive. On his advice, we ordered fancy Beyletbeyi Gobek 3 Raki ….which we wouldn’t have without his “help”…..and very nice it was too!

It was very Turkish with very few tourists. We had marinaded sea-bass, seafood stuffed mushrooms, crab claws, Calamari rings stuffed with seafood, a yoghurt salad and an aubergine salad, topped off by a seabass. It was delicious!. Grilled, tender and juicy. Simply done but all the better for it.

The speciality dessert was a helva & tahini crepe. It was both unusual and good. The crepe was almost toasted and crispy. A nice sauce with dondurma (a gummy ice-cream) and orange to compliment it.

It was a most enjoyable meal in a lovely location. It wasn’t the cheapest meal we have ever had but the quality and enjoyment was top-notch. 450 TL all-in (about £60). Akyaka faith has been restored.